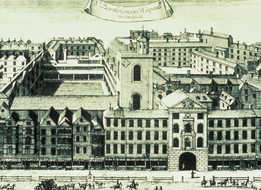 Temper the bitter things in life with a smile runs the Barts and The London motto, but many are finding it hard to grin and bear a controversial decision to rename the historic institution as Queen Mary Faculty of Medicine and Dentistry.

Barts, the affectionate nickname for St Bartholomew’s and The London School of Medicine and Dentistry, was founded 899 years ago and has been synonymous with medical excellence ever since.

The rebranding provoked outrage among some students and staff who claim it threatens the distinct identity of the college.

Rob Tucker, President of the Barts and the London Student Association (BSLA), has rallied opposition to the move: “This occurred with no consultation with students, alumni, or the faculty staff,” he said. “The Barts name is 900 years old next year and still remains the strongest healthcare brand this country owns – why remove that?”

Tucker helped found ‘WeAreBL,’ a student-led campaign started in January seeking to preserve the famous name. Their public petition has garnered over 15,000 signatures and received attention in the national media, after six alumni wrote to The Times last month accusing the University of “wiping out hundreds of years of heritage and success.”

The decision was communicated in late November 2021, in an email titled ‘update on branding’ from Professor Irene Leigh, the Vice Principal for Health. She said the university was acting to become more cohesive and collegiate, and indicated that an open consultation over the name change would occur in the next few months. Three months later this is yet to happen.

It marks the latest step to unify the Queen Mary and Barts’ brand. As far back as 2019, students and staff have noticed subtle changes such as the removal of signage around campus and an altered website title. Then BLSA President Rankin Choudhury raised his concerns in this paper, warning: “For senior management at Queen Mary to kill the Barts and The London brand, as it is doing slowly but surely, it not only extinguishes Barts and The London, it hurts Queen Mary deeply too. Even the greatest of empires can crumble from within.”

The ‘empire’ began in 1123 when divine inspiration struck Rahere, a prominent royal courtier, and a vision of Saint Bartholomew induced him to construct a hospital in the Smithfield area.

Despite officially merging with Queen Mary in 1995, the medical school has managed to retain a relatively separate identity – with its own societies, campus and, until now, name.

Many are concerned that while Barts lends a prestige recognised in medical circles, Queen Mary lacks a similar profile

Barts has a decorated history as Britain’s oldest medical school and has produced some of the leading lights of the medical profession, including Sir Peter Mansfield, MRI pioneer, Dame Parveen Kumar, onetime President of the British Medical Association, and Sir John Vane, an influential pharmacologist – as well as cult heroes such as Python Graham Chapman and Queen Drummer Rodger Taylor.

Simon Fleming is a Barts alumni, currently working as orthopaedic registrar (trainee surgeon) at University College London Hospital. He undertook his undergraduate, MSc and PhD at Barts. He is a member of the Alumni Association – where he first heard about the proposal. He is concerned that the Barts brand lends a prestige recognised in medical circles, whereas Queen Mary lacks a similar profile.

“The world knows BL to be a centre of excellence for education and research and to rename it is to ignore and undermine the hard work and voices of tens of thousands,” he said.

“I hope the petition and the thousands of voices are successful in making QM reconsider. Barts and the London, as community, identity and global brand can exist alongside and within QM. Queen Mary should listen to its main stakeholders and should allow Barts and the London to continue.”

“A strong coherent identity is vital to enable us to operate seamlessly as one organisation, breakdown silos, and to underpin strong collaborative working with others to achieve shared goals,” they added.

“Across our university community, we have made considerable progress in consolidating and strengthening our clear identity as a leading Russell Group University over the last few years. We are now exploring avenues in order to complete this work to ensure no possible confusion for students, partners and the public.”