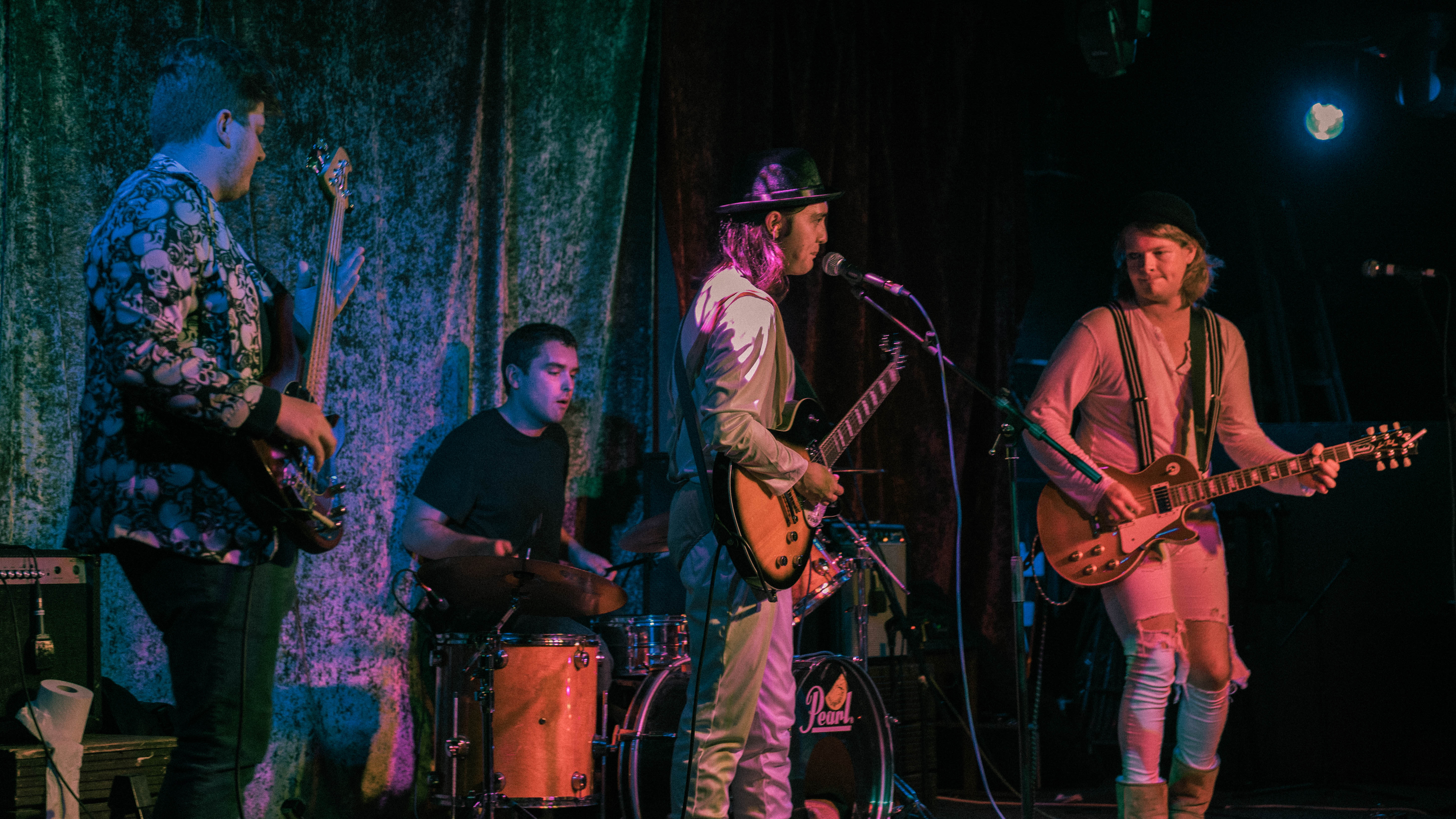 I arrived at the Amersham Arms bedecked in a full leather trench coat with dark shades to boot and a growing concern the band had been pulling my leg about the costume requirement, as I glanced about the olde-worlde trimmings of the Amersham Arms and its older-worlde Tuesday night patrons. Fortunately, the barman soon ushered me through an inconspicuous side door, and wood panelling and dated décor fell away into a veritable rock cave located around the back of the venue. I found myself right at home amongst Britney Spears, Spiderman, and one guy with a TV for a head – to name just a few.

After some spirited warm up acts, the band begin their Halloween set with ‘Crash Test Dummy’, an anxiety-fuelled ballad bemoaning the fast pace of modern life – “I crash headfirst into today” – poignant lyrics which resonate with middling university students everywhere: “I used to be so driven… someone else just wants it more”, “You’re so predictable, and sure you could be so much more.” There’s a great payoff at the end with some truly delicious punky bass work, as Jamie channels Mike Dirnt.

It’s soon followed up by the refined and punchy ‘Girl With the Sun in Her Eyes’ (previously profiled by this paper here) – a fan favourite which featured on BBC Introducing last year. Twangy guitar makes for an uplifting melody.

‘The Elephant Room’ is another polished indie anthem on par with anything The Strokes or Foo Fighters have released of late. Cashman’s drums are the driving force here, as the song goes rumbling and crashing into a satisfying chorus.

‘Staring At His Phone’ pairs clean, upbeat, fluffy guitar licks with despondent lyricism straight from The Smiths’ playbook: “He’s staring at his phone, he’s drunk and alone, she said that they could be friends.” It’s more barebones than their previous few but catchy nonetheless.

Another highlight is ‘Play On’, a bluesy, ambling number accompanied by crooning vocals from Gary. Lighters in the air! Some choice guitar improv from Peter goes a long way in keeping things interesting. As yet painfully unreleased, but available as a demo on Bandcamp.

The night finished with ‘Alright’ in a lively tribute to Supergrass. The audience appreciated a singalong, and the atmosphere soared. When the stage lights came up the crowd reluctantly dispersed, spirits thoroughly lifted, filing into the chicken shops and kabab joints of New Cross.

With such variation in songs and styles, the band cite a suitably eclectic range of influences: from the indie melancholia of Arcade fire to Australian microtonal dynamos King Gizzard & the Lizard Wizard to heterodox pop queen Billie Eilish.

They bill themselves as a “Meta, self-deprecating, and occasionally earnest Indie Rock band” – and have a repertoire to match – with tunes including ‘Manic Pixie Dream Song’, ‘Ballard of a Deluded Tragic Hopeless Romantic’ and ‘Postmodern Love’.

Project Culture first met through QM’s Alternative Music Society (which survives to this day in the caverns underneath the Queen’s Building), started by Gary to find likeminded music enthusiasts. “The goal was to create a thriving scene on campus of music listeners and performers alike” he remembers.

“To get people to sign up for the society, me and my mates shamelessly plugged it to everyone we met at Monday’s Calling.”

Gary, Peter and Jamie met at their first social. Toby soon followed, responding to an online ad looking for a drummer.

Queen Mary has long been a wellspring of musical talent, counting Bruce Dickenson of Iron Maiden and Pete Doherty of The Libertines as alumni. Now equipped with a manager, Project Culture could soon follow the well-trod path from QM to rock stardom.

They also live apart, which can only be healthy for their future prospects.

Project Culture are back in the studio to record their Christmas single ‘L.O.V.E Actually’ and you can catch their next gig at The Troubadour, West Brompton on December 14th. Find them on Spotify, Bandcamp, and Instagram @projectculture (a handle which Gary insists he didn’t pay for).

All would gig at QM if given the opportunity. Professor Bailey, the offer is there.