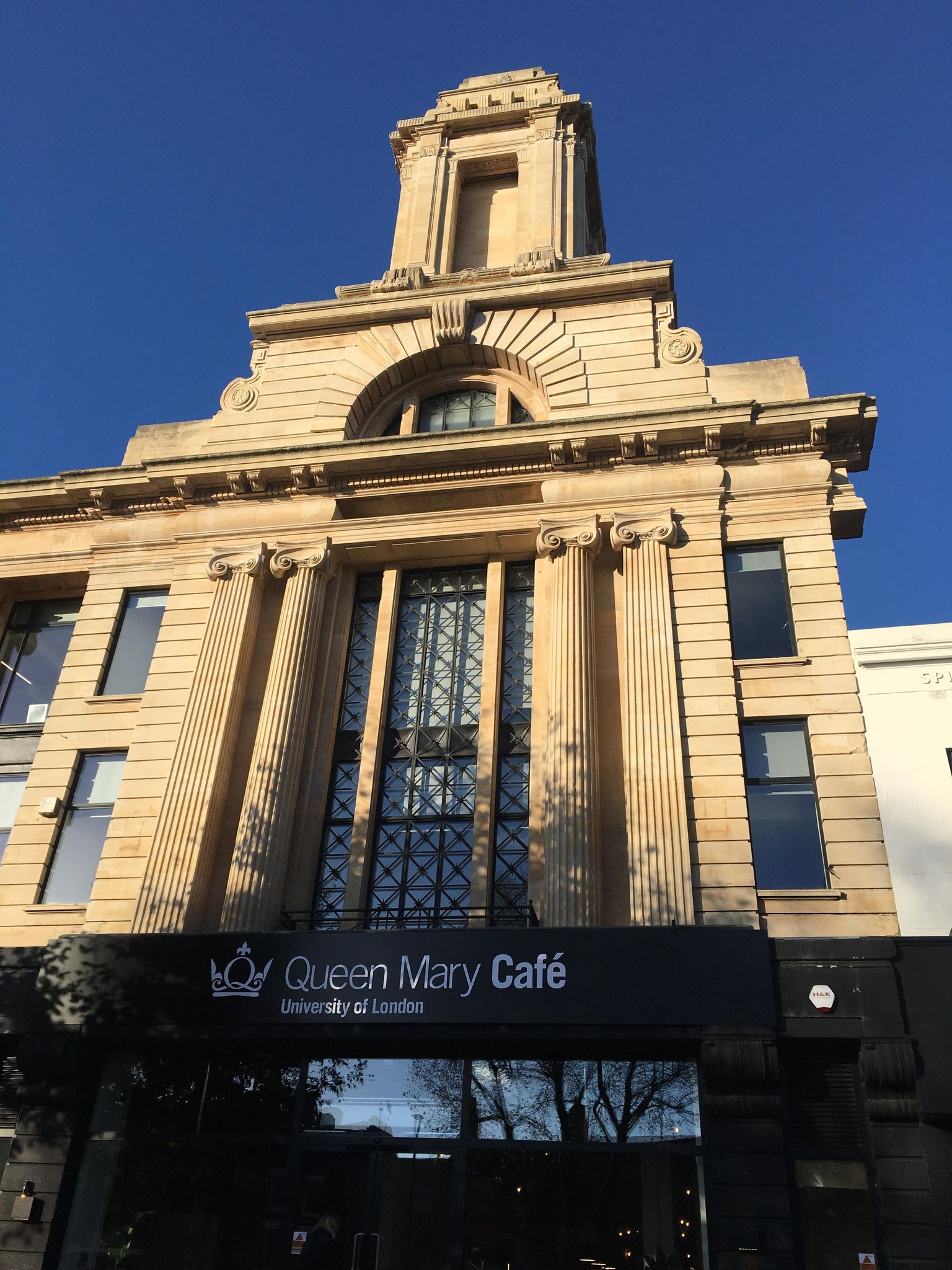 A Trip to the Queen Mary Café

I spy the somber black visage of the new Queen Mary Café a second too late as the 25 bus passes it, and I hurry to alight amidst the traveling crowd. Once free, standing on the leaf-scattered pavement, I am struck by the height and beauty of a palatial tower topping the stunted coffee-peddling establishment. This is an office building named Department W, and it makes the café appear to have somehow emerged from a bleaker underground realm in the hopes of one day joining Dept W in a serene union of sunlit glory. The café is as far as I can tell successful in its ascension from Hell, though there remains a suspicion that it is poking fun at its own architectural ‘hat’ as it were.

This place is a beacon of minimalism and honesty. A still-dusty glass frontage gives way to a surprisingly spacious interior, which consists of a laid-back, modern synergy of two seating styles. Wide circular tables, surrounded by a flowing entourage of faux-wooden upholstered chairs, calm the nervous glamour of a built-in rank of angular wooden ‘booths’. These sport imaginably sticky leather couch seats, which seem to be the preferred choice of the café’s customers. Exposed pipes and hanging lights vaguely reminiscent of hairdressers’ heat-setting helmets reign the matte black ceiling. Even though five of them have been bunged into the same corner, the presence of six leafy plants is unobtrusive and adds a subtle, necessary texture to the environment.

I approach the displays of ‘homemade food’ with a cautious enthusiasm, and am soon seduced by an array of genuinely tempting bagels at temptingly genuine prices. Their glazed top halves are tilted backwards with a gentlemanly quirkiness revealing cosily enmeshed layers of smoked salmon, cheese and spinach, and I am forced to regain my composure. I am here for business only. There is an unpretentious approach evident in the food and drink menus despite the café’s predictable submission to the supposed absolute necessity of certain hipster provisions; I am unimpressed by the insistent niche complexity of some of the boxed meals. I order a ‘cappuchino’ (sic) as per menu indication, which is priced at a careful £2.50. It comes in a disposable cardboard cup.

This is a trend that has recently emerged in particularly student-focused ‘coffee shops’, and it seems to the over-caffeinated, anxious reporter that the cardboard cup threatens to soon usurp the mug in all but greasy-spoons and restaurants. Understandably, as a barmaid myself in a dishwasherless establishment, it is far preferable to avoid the dirge of doing the washing-up, though I begin to question amongst the towers of cardboard porridge and cellophane vegan chicken whether anything in this café can actually be served on a real plate. Coffee shops seem to have forsaken the comfort of the customer in the interests of transient convenience, and so the takeaway is now identical to the eat-in experience. It doesn’t matter how long you stay or if you stay at all, and it certainly doesn’t matter if you come back. There seems to be no interest in attracting regular patrons based on their homely familiarity with the place, as is further evident in the advertising screens flashing behind the till which extol the virtues of the outsourced Paddy and Scott’s coffee. The brand, also represented on a stack of loyalty cards and the chalkboard outside, bears a stronger presence than the generically named café itself.

Nonetheless, this functionalism is admirable. The café has been open for just two months, the friendly barista informs me, (or ‘three if you count the opening month’ which I am told consisted of an exclusively staff-only patronage). After chatting to the staff, who are really, really nice, I find myself sat at one of the circular tables, stirring white sugar into my lusciously foamed drink. Sunlight streams in through the glass as Toto’s Africa plays over the radio, followed by a riskily early Christmas song. I realise with surprise that I am unenraged. I am one with the modern world, tapping suavely at my laptop keyboard.

The Queen Mary Café trumps every on-campus café I have attended. It is welcoming and  harmonious, suited perfectly to studying and quiet socialising. I only wish it would stay open later, since though I mistakenly hurried to a cancelled 3pm seminar, my instinct upon facing such pedagogical betrayal was to return to the Café. This is my new safe space. I would thoroughly recommend this fine establishment.