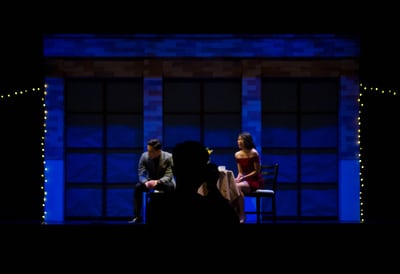 Hope Mill Theatre’s new production of RENT was originally supposed to be playing to socially-distanced live audiences in Manchester, however with the announcement of a second lockdown it was moved online instead. Happily, this meant that I still got to see it! Considering what an iconic musical it is, it’s surprising that it took me so long to experience it for the first time, but I am extremely glad I did- this production is a complete triumph.

I think what ultimately made it so special was the cast- they had a chemistry which can only come from social bubbling in a twelve-bedroom house together. You could tell how much they were enjoying performing together and the passion they brought to the show was incredible- no doubt they were thrilled to be on stage again after such a difficult year for the industry. On top of that, they are an incredibly talented bunch.

Tom Francis was particularly outstanding in his professional debut as Roger. Not only is his voice wonderful, but he is also a brilliant actor. An advantage of seeing a recorded version rather than in person was that I could see close up all the emotion he brought to the role. It is staggering that he has only just graduated and he is definitely a star in the making. He and Maiya Quansah-Breed portrayed Roger and Mimi’s relationship beautifully and Blake Patrick Harrison was very good as Mark, truly inhabiting the role that he was very well suited for. Millie O’Connell shone as Maureen- her stage presence is truly astonishing. The whole cast was brilliant and deserve to be mentioned!

The band should be commended on a wonderful job with the music too. They were an important part of making moments like the opening song RENT at the beginning, and my personal favourite, La Vie Boheme, feel truly explosive, along with the full on choreography and lighting design.

Overall, it was a truly exhilarating piece of theatre, one that I wish I could have seen in person but it still had a lot of power when on screen- this will stay with me for a long time!