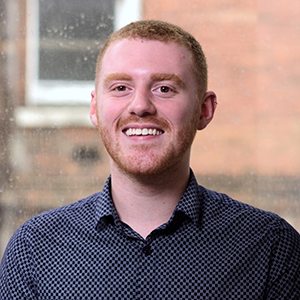 A: Having been a student here, and heavily involved in the SU for five years, the Student Union means a lot to me. I had always considered using my wealth of SU experience to run for an executive officer position, and thought this was going to be Vice President of Barts and The London (BLSA President). However, seeing the incredible work of previous and current VP Welfares – Ella and Shamima – on issues like consent, sex and relationships, and Report and Support, as well as my own experiences of mental health problems and disability, really inspired me to change direction. I care so much about our student community here at Queen Mary, and the prospect of spending a year working on initiatives to improve the welfare of our students is so exciting!

I’m also super excited about being able to shape the new direction of this role. I was actually one of the three students who proposed the VP Welfare and Communities split in a Democracy Review consultation with the current Executive Officers. Both the ‘welfare’ side and the ‘liberation’ side of the old combined role are incredibly important for students and our union, and so they both quite rightly deserve a full-time executive officer each because they are huge tasks! It’s great that the VP Welfare will now have more time to work on other areas of student welfare, like finance and accommodation, that previously received less attention due to the enormity of the workload of the old combined role.

A: I’ve known and worked with numerous VP Welfares and the first thing I would say is that they’ve all done a fantastic job. I think there are many issues related to student welfare that need more attention, but I think they would always benefit from more attention, and any previously unaddressed welfare issues are likely from lack of time and resources (again due to the size of the old combined role) rather than lack of care.

A big part of my campaign is about refocusing the VP Welfare role after the split and returning to these unaddressed welfare issues. I think finance and housing are some of the biggest gaps in the otherwise fantastic work the union currently does, and these issues are also some of the biggest causes of welfare problems amongst our students. As VP Welfare, I would lobby for the university for greater investment in bursaries and hardship funds, improve the advertisement of this financial support available, de-mistify and streamline the application processes, promote living wage jobs for students, work collaboratively with QM Residences to look after the welfare of halls residents, and support the welfare of students with difficulties in private accommodation.

There is so much more I want to do in these areas, so check out my manifesto and social media pages for more detail!

Q: The mission statement of the QMSU is ‘to improve students’ lives’ and so it’s so vital that students engage with the SU elections and the candidates because students have so much to gain from the work their representatives do. This is even more true of the executive officers who work full-time for 12 months, and so can achieve even more in their year in office than the part-time officers can. These executive officers are paid a pretty respectable salary to represent all students at Queen Mary and improve their university experience, and so it’s only right that they are fairly elected based on merit, experience, and strength of their policies.

A:  Of all the executive officers, engaging with VP Welfare has the potential to improve a student’s quality of life the most because of the nature of their projects compared to the other executive officers. The work of VP Welfare is all about ensuring students are healthy, happy, and have what they need to thrive, and introducing initiatives and policies to redress that balance if they’re not.

A: My policies – based on survey results, student feedback, and years of experience – are realistic and achievable with tangible outcomes, and are policies that will truly improve students’ lives.

A: Working closely with Tower Hamlets council is a great way to add weight behind campaigns and initiatives in the union, and something that our current President Talhah has done brilliantly with his collaborative work with them on the climate crisis protests. There are many other things the council could help us with, such as crime on campus and the local area, housing problems for students with rogue landlords, increasing local green space to improve student wellbeing and mental health, and air pollution in the local area. I also think the union can reciprocate in this relationship and help the local council with things like getting students engaged in local politics and registering to vote, advertising council opportunities to students, and getting students involved in local community initiatives.

A: Definitely not a sloth because I’m absolutely terrified of them! Probably an elephant because we have so many characteristics in common. They’re herd animals that always look out for their community, they’re compassionate and nurturing, they’re emotionally very responsive, and they’re great leaders. Unfortunately, I don’t quite have the memory of an elephant (more like a goldfish) but you can’t have everything!