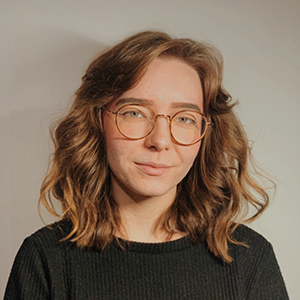 Q: As I said in my statement, being the Editor-in-Chief of CUB Magazine opened my eyes to the mistreatment and upset that runs throughout student welfare. From conversations with my writers, it became clear that there was something deeper going on on campus that needed to be fixed or improved upon. Being the Editor-in-Chief allowed students to confide in me with issues that were of a sensitive nature because they trusted me and because I was in a position which is between the SU and the student body – the “middle man”, you could say. They felt as if I could help them, especially with my Heads of Media, consent training and my own mental health issues which I have always been open about to express to my team. This, in turn, inspired me to run for VP Welfare, to be that “middle man” (or woman, rather) who can work with the students and the university to give the students the support they truly need.

A: I will admit, I was one of those individuals that did not take the elections into consideration for my first two years of study and I do regret not involving myself more in the elections, which is why I was so driven to take part in my final year. This year, I have read every single statement of nearly every category and it is enlightening to see such a vast number of young people who want to better students’ experience at university.

Students should take more of an interest because, even if it does not directly affect their education – say, they are a final year student – it will affect the whole university experience for the students to come. Why, if you are not happy with how your university experience was, would you allow it to continue by not being involved in the elections? Speaking to students during my campaign made me realise that many did not even know what the SU Welfare Representative role is on campus, which blew my mind. I want to change that and involve the students as much as I can in Welfare because, at the end of the day, it’s their experience I am trying to improve.

A: I wish to create awareness on campus for those who have their voices silenced; BAME students, those with mental health diagnoses, sexually assaulted students and everyone who feels as if they cannot speak out for what is right – I want equality on campus.

I also wish for everyone who has a role on campus, such as Heads of Media or SU employees or Ground Cafe staff, to have training to support students to their best ability.

Male mental health too is a key part of my campaign, I no longer wish to see my fellow male students hide their mental health issues in sock drawers because they feel afraid to express weakness, as well as sexual assault cases where men are the victims. I want to open the door, to provide help to those men who have hidden in the shadows for too long.

I also want to ensure that campaigns such as LGBTQ+ Month, Black History Month and Asian Heritage Month receive the coverage they deserve, alongside classroom engagement.

A: I would wish to discuss an issue which is very heated right now, which is strike action. I would like to discuss how strikes affect students in a way that is detrimental to their study, their mental health and what can really be done in order to stop this happening on a yearly basis. I stand with the staff on the reasons behind the strikes, but I wish to explain the real issues students face when weeks of their study are taken from them.

Sadly, as we all know sexual assault is a terror on campus and we all know of a student who has been raped or assaulted on university grounds. I would like to have an open discussion with the local council about why the issue is so rampant on campus, to express the pain directly to the council from the voices of those affected on campus from lack of security or help and direction to the correct authorities.

A: If I were to choose an animal, I would be a bear. A creature which symbolises leadership and strength whilst also conveying a nurturing and wholesome side – healing and laying the foundations for growth – which is what I believe the Welfare representative should do. To guide and protect. To nurture and understand.

Interestingly, tribes have often used the bear as a symbol of the warrior who heads into battle first, and I wish to head into battle to transform the welfare system on campus, to better student experience and safety, and to lead the way.