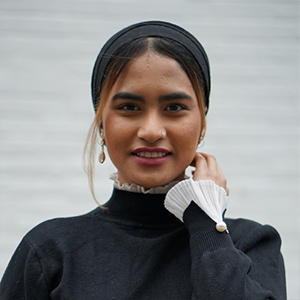 A: Running for President is not an easy decision, being an Executive Officer is as tough as it is fulfilling, learnt that very well this year! But, I decided to run because I want to leave Queen Mary knowing that I’ve made the maximum impact and in order for me to make that impact, I need to be in the meetings that the President is in, I need to have a say regarding our Estates strategy, I need to have those regular conversations with Senior Executives and I need to have a say in the wider organisational change and strategy, outside of just welfare. Whether it’s change within the university or within the Union.

A: Alongside the issues I have highlighted in my manifesto, there are underlying cultural issues that have been a constant over the years and still are unfortunately, including and not being limited to, institutional racism both within the Union and the University. As Vice President Welfare I have already started work on this, however it is something that has always been overlooked and needs more of a push and as President I would continue working towards acknowledging the issue and creating an appropriate strategy to combat it. Cultural change takes time and effort and I wish to give this issue the appropriate attention.
This goes for any issue that comes up or remains, as President it will be my job to ensure that the student voice is heard in high level meetings where strategies that affect the next 10 years of QMUL are being made.

A: I say this a lot and I will constantly say so… yes, it is difficult for students to trust positions of power. The frustration of years and years of disappointment will linger and that leads to a detachment from institutions such as the Union.
There is an issue of how students can form that trust and engage. However it is vital to, in order to impact University decisions and make changes; students are the ones that give us the mandate to do so and without their engagement, we cannot make an impact that is effective and lasting.
We are also accountable to no one but the students themselves, hence why their engagement drives the work we do. It is our responsibility, as an executive team, to be as transparent as possible and ensure we are keeping students in the loop of what’s happening, what decisions are being made, who is affected, and answer any questions the students have with full honesty.

A: In one sentence, I would describe my policies as “a strategy to implement real change, both practical and ideological, within the institution”.

A: First year was a lifechanging year and I was a fairly engaged student, who joined the committee for Bangladesh society, took part in volunteering opportunities and ended up learning more about myself. These are things I wouldn’t change. Although, given the chance, I would like to be doing more with the Union from an earlier stage; it wasn’t until end of second year, where I found out about becoming representatives and these schemes that were available, such as the Skills Award. Genuinely felt like I missed out!

A: If it’s animated, then it has to be Elsa from Frozen. I find her very relatable in the underlying emotions she carries with her. This includes that sense of responsibility for others, the journey to accepting yourself and your voice, I find that all too relatable from the perspective of the challenges I’ve faced since becoming estranged after escaping a forced marriage. Might sound like a stretch but these emotions and sentiments are all the same when an individual – especially a woman – finally starts to break out of her shell and starts accepting herself, despite being told otherwise.