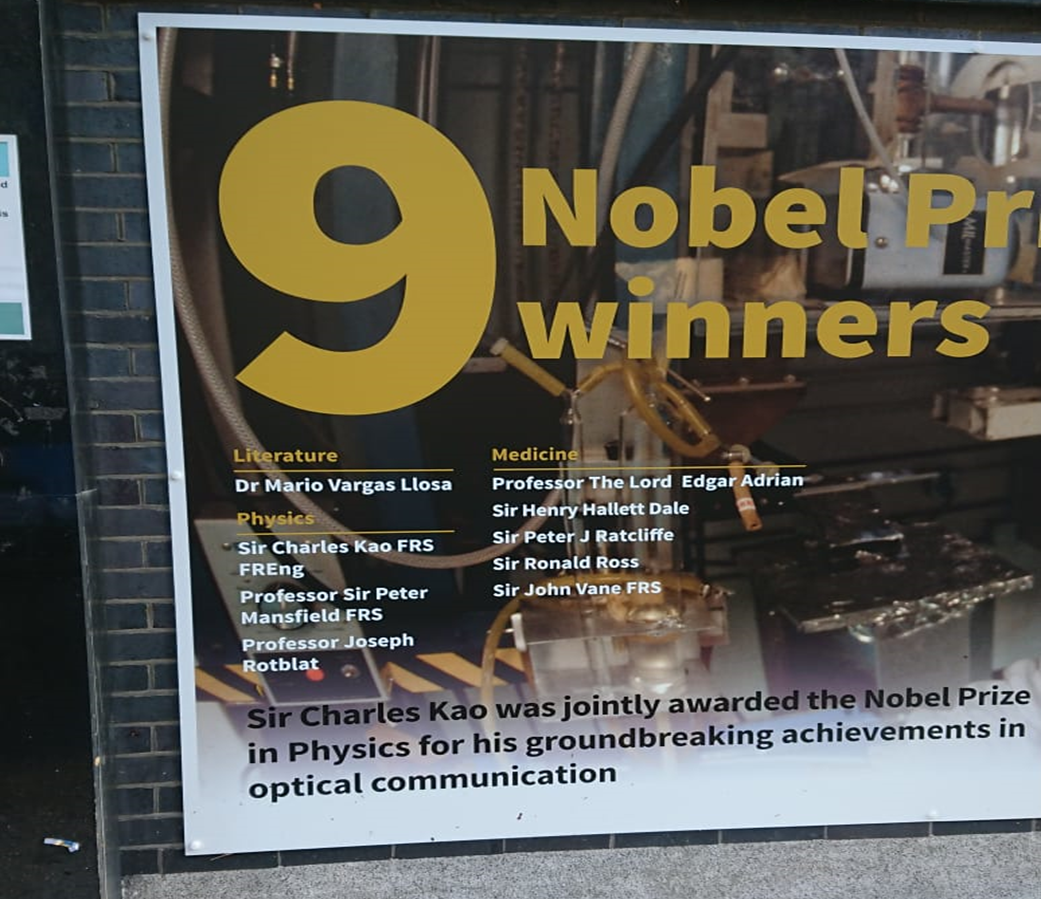 The Lost Laureates: Could QMUL add to it’s list of winners?

By Rakin Choudhury on 19th November 2019

With thanks to Professor Michael Swash, Emeritus Professor of Neurology at Barts and The London School of Medicine and Dentistry, Queen Mary University of London, who identified the omission of two Londoners from Queen Mary’s list of Nobel Laureates.

But would those at The (Royal) London protest that this chant should read eight Nobels?

If you have recently walked to Mile End, you will notice the displays on the G O Jones Building have changed. They now proudly proclaim that we have had “9 Nobel Prize Winners” at Queen Mary University of London. But could the university claim more?

Barts vs The London

Of course, those who were at “Queen Mary University” when one of its colleges was known as St Bartholomew’s Hospital Medical College, will be quick to point out that of those nine Nobel Laureates, six walked through the corridors at Barts.

There will be some who will haughtily play this up as evidence of the medical faculty being the best at Queen Mary. But six of “QM’s Nobel Prize Winners” being Barts men was rarely ever shouted to disparage Queen Mary, but more presented as proof by Barts medics of their professed superiority over The London.

We forget now just how great that animosity was between students at Barts and at The London in the pre-merger days. But it was great, and continued as such for as much as a decade afterwards.

I do not know if “Six Nobels and Two Campuses, doo dah“ was ever chanted towards The London at Chiselhurst in the way England fans chant “Two World Wars and One World Cup” at Germany, but having those six names to The London’s none did confer Barts a certain degree of bragging rights.

Of course, as prestigious an honour as the Nobel Prize is (that prestige likely conferred by the rather generous amount of Swedish kroner accompanying it), holding too much weight by it is rather silly. The London was no lesser than Barts, something worth remembering when we call ourselves Barts men and women, instead of proudly hailing from BL.

The Desperation in a Quest for Prizes

But while we have other and truer metrics for the success of a university (such as REF or TEF or whatever other EFing thing there might be), there is no denying that the number of Nobel Laureates may sometimes be used as a shorthand for the standing of a higher education institute. Just look at the number of Oxbridge colleges who smugly recite their Laureates.

Counting Nobels is no doubt a game of politics and reputation, rather than a true indicator of academic achievement. Indeed, there are many universities who will be generous with their counts, making the most spurious of claims over an academic who once happened to use their institution’s toilets. After all, if they signed an autograph while there, that is evidence enough they published a research paper as a visiting professor.

Dr Mario Vargas Llosa, winner of the Nobel Prize for Literature 2010, was made an Honorary Fellow by Queen Mary in 1988, but his biography on the Nobel Prize site makes no note of the College. This is not to diminish QMUL’s claim. The London’s assertion over its two Laureates is equally valid; they were both short-term academic staff (one of three categories recognized by Wikipedia, alongside alumni and long-term staff), hence why they have likely remained obscure to the wider university.

Instead, this is more of an indication of how desperate we become in the quest of laying claim to any winner of a Nobel Prize. Even Barts is guilty of stretching its claims. We have Sir John Vane, who won the Nobel Prize for Physiology or Medicine 1982 for research into aspirin. Sir John Vane founded the William Harvey Research Institute in 1986, but that does not change the fact that his Prize-winning research took place before he was ever at Barts.

And whether being a student at an institution gives it any more legitimate a claim over you if your work took place elsewhere is likewise debatable. It is a question worth posing to Professor Sir Peter Ratcliffe, Nobel Laureate in Physiology or Medicine 2019, who was only at Barts for a few years in the late 1970s, but who expressed his fond memories of the place when he agreed to talk during Barts and The London Week in January 2020.

So one may argue whether or not it is right to claim so many Nobel Laureates among our alumni and former staff. But the university, in this poster at least, have. So why not claim more if they can?

There are two Londoners who have gone on to win a Nobel Prize but who have seemingly been lost to time. It is worth noting that both of these men were only ever short-term academic staff at The London Hospital. But a cursory look at their Nobel Prize biographies easily reveals mention of The London.

The first omitted name is Professor John James Rickard MacLeod, winner of the Nobel Prize in Physiology or Medicine 1923 for “the discovery of insulin”. His biography mentions that “in 1899 he was appointed Demonstrator of Physiology at the London Hospital Medical School under Professor Leonard Hill and in 1902 he was appointed Lecturer in Biochemistry at the same College”.

However, MacLeod’s Prize was not without controversy for its omission of perhaps more deserving names. Student Charles Best played an arguably more instrumental role in the laboratory work to extract insulin. But the work took place in John MacLeod’s laboratory and “my house, my rules” was very much in force in the 1920s. It was later established that MacLeod had fully merited the honour, but so did Best. While Best was not named as a winner, Frederick Banting, the co-recipient of the prize in 1923, did share half his prize money with Best. MacLeod followed suit with another colleague, James Collip, without whom insulin could not have been purely extracted.

A less controversial victory went to the second Laureate from The London, although the medical school has a weaker claim to him. Sir Howard Walter Florey won the Nobel Prize in Physiology or Medicine 1945 for “the discovery of penicillin and its curative effects”, together with Sir Alexander Fleming and Sir Ernst Boris Chain. According to the Nobel Prize website, Florey held “the Freedom Research Fellowship at The London Hospital”.

Professor Michael Swash shared his insight that Florey would have worked at The London in the Department of Bacteriology with Professor Paul Fildes, an experience which would have undoubtedly helped him to later manufacture (together with Chain) sufficient quantities of penicillin to be used in World War II to treat war wounds.

Of course, the prize was shared with two St Mary’s men (who are two of three Prize winners affiliated with the Imperial College School of Medicine). Medics there will boast of their claim to the likes of Sir Alexander Fleming. One does not wish to rob them of that honour when they also have to take credit for the likes of Andrew Wakefield. But a good joke when comparing BLSMD and ICSM and their Nobel Prizes is that as great as the discovery of penicillin was, antibiotic resistance is a thing, while aspirin still gives relief from pain. In fact, no new class of antibiotics has been found since 1980, in which time Sir John Vane won the Nobel for his research into aspirin!

The Search for A Barts and The London Laureate

Of course, that joke illustrates just how much seriousness with which the claim to Nobel Laureates should be treated. While it is exciting to think we have found two new Laureates from The London Hospital, we should be celebrating these winners (and their connection to Barts and The London today) for what they did to achieve the Prize, rather than for merely possessing the Prize itself. One ceremony in Sweden is not more important than the years of research which came before.

And rather than counting Nobel Prizes, we should instead be looking at producing academics who will win the next one. For whether there are two winners at The London or not, the most important question is who will be the first Barts and The London Nobel Laureate?

Published in conjunction with Circadian Magazine

Published in Barts & The London News and Opinions