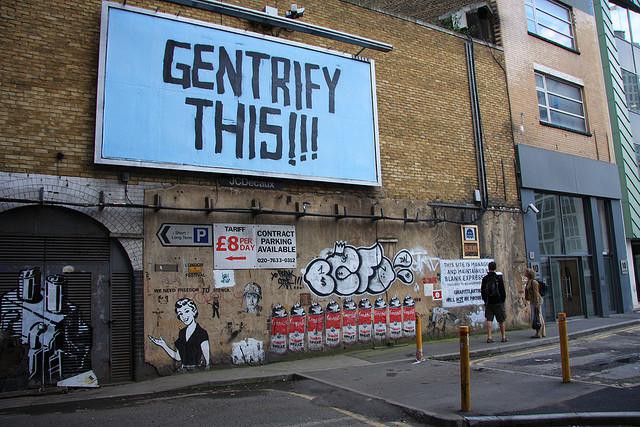 Organic vegan coffee shops, flashy flats and the infamous image of the hipster young professional: In the last decade, East london and gentrification have seemingly become synonymous. The phrase is one which every londoner is well acquainted with; however many of us are misguided on both its definition and the real life implications on the communities we live in. Being students of Queen Mary, we are witnessing, and to some extent participating in, a social and economic transition. But what are the consequences? And how can we understand such a weight and ever evolving phenomenon?

Gentrification was first coined by Ruth Glass in direct reference to London. She used it in her 1964 study, ‘London: aspects of change.’ to describe the displacement of the native working-class in their urban neighborhoods by the middle classes or “Urban Pioneers”, young professionals or artists with a bohemian lifestyle. Through this act, the economic and cultural elements of the area are altered, causing a wave of social cleansing which further alienates the original occupants of the community.

This issue primarily seems to originate in housing.  Areas which were once economically disinvested in by councils and businesses experience a wave of property investors, developers and private landlords after being recognised for unique qualities. Traditionally these areas are occupied by artistic or bohemian communities, bringing with it a cultural shift. Have you ever wondered why you are paying eye watering prices for a three bed, ex-council maisonette? With this financial incentive of non-working class buyers, the council sells social housing causing an overall increase in rent prices, forcing those who have often lived in their council owned homes for decades to either buy them, or be relocated further away from their communities. This replacement unfairly forces out local, working class citizens to be replaced by usually white, young ‘creatives’ who can ‘just about’ afford to pay out the unreasonable rent.

Recent studies from UCLA suggest that public investment increases the rate of gentrification considerably. Transport, public schools, parks and general amenities all alter the social perception of an area, making it more appealing to the upper middle classes. An example of this can be represented through the local areas such as Hackney Wick, found between Victoria park and Stratford. The location, once known for its industrial production and transport along Hertford Union Canal, is now in the midst of rejuvenation similar to the one Shoreditch has experienced in the last twenty years. With an overground station which is not only now open 24 hours on weekends, but is also only one stop away from the internationally connected Stratford; Hackney Wick is now an appealing and somewhat affordable spot for the common commuter. Large scale builds such as ‘The Bagel Factory’ and ‘Fish Island Village’ aren’t limited to new homes but instead curate entire communities. These provide curbside appeal, presenting a cookie cutter clean and safe community equipped with the ‘essentials’ such as coffee shops and communal work spaces. Often supported by the government scheme ‘Help to Buy’, there isn’t anything necessarily wrong with these modern, professional communities. Nevertheless, it prompts us to reflect on which socio-economic demographics are being invested in and the broader consequences for those who can not afford the new £450k apartments.

However it would be too simple to suggest that gentrification is caused by a villainous, greedy group of young rich people. Many move to boroughs such as Tower Hamlets, Hackney and Newham as they offer the possibility to rent a bedroom for under £600 a month whilst remaining close enough to the city. Can you blame these people for living where they can afford to in a city which costs more and more each year? There is a glimpse of home through the Mayor of London, Sadiq Khan’s latest promised strategy to deliver ‘genuinely affordable homes’ across the capital, yet it is still unclear if this will have a notable effect on the rates of gentrification.