Why is Queen Mary trying to kill the Barts and The London brand?

The senior management at Queen Mary University of London have decided to introduce a new logo for the Barts and The London School of Medicine and Dentistry. It is one which morphs the existing logo into a generic College logo. It is one which threatens our School’s very identity.

A lot of people will ask why this is important. Who cares about this change? We, the School, are a part of the wider College after all. And we are. Have been for a couple of decades or so. Nobody is saying that we are not a part of Queen Mary University of London. 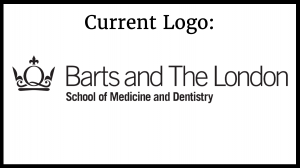 But one has to ask, why is this logo being changed? We are, in effect, renaming the medical school Queen Mary School of Medicine and Dentistry, but what is the motivation here? If this were being done by senior management to show how we are all one Queen Mary family, I would see this as almost a positive, if misguided, change. But these underlying intentions are not about the Queen Mary University of London brand. These nefarious intentions concern only Barts and The London School of Medicine and Dentistry. 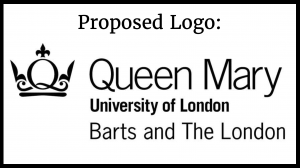 If senior management at Queen Mary were interested in there being one big QM family, we would be looking at investing in Queen Mary, such that it becomes a recognizable brand itself. Instead, prospective students come here barely knowing what Queen Mary is. Half of them call it Queen’s. I am not sure whether those students are confusing it with Queen’s University in Belfast or Queen’s Hospital in Romford or some other Queen’s altogether. But next to UCL, LSE, Imperial and King’s, the other Russell Group universities in London, it is shameful that so few people are familiar with Queen Mary University of London (or QMUL, or Queen Mary, or whatever we call ourselves). 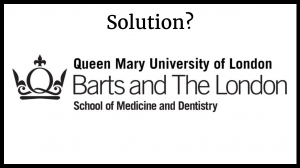 But the suggested rebrand does not change that in the slightest. In essence, the senior management do not care about promoting Queen Mary, they care only about suppressing Barts and The London. Because having distinct constituent colleges really hurts us as an institution, I suppose? Just ask Oxford and Cambridge, that is exactly what they will tell you.

One has to ask again, why is this logo being changed? We know what senior management of the College think they get out of it, what do the School? We are being asked to sacrifice our logo, to sacrifice that community which is one of the things which makes Barts and The London such a special place to be. Tell me why we should make this sacrifice. What will senior management at Queen Mary give our students to make this all a bit more palatable?

Other than new signs reading Queen Mary University of London, we are seeing little meaningful investment at Queen Mary’s ‘satellite’ campuses (i.e. the medical school). The Library at Mile End is 24/7 now, but the senior management make few efforts to alleviate issues at West Smithfield and Whitechapel Libraries. There is now all-new, contemporary accommodation at Stratford, yet the senior management still threatens Dawson Hall with closure. The land of the old Royal London Hospital was available to purchase. Prime land in the centre of London, the type of land which is available once in a lifetime, the type of land which we could use to deliver much-needed development and expansion on our campus. The senior management said it was too expensive.

We are a Russell Group university. Yet our facilities are poorer than some of our neighbours like City.

If the rebrand came with a promise of millions of pounds worth of investment into Whitechapel, Charterhouse Square, West Smithfield, and Gozo Campuses, at least we can then say that the senior management do care a little about the students. But nobody is putting their money where their mouth is. We are a Russell Group university. Yet our facilities are poorer than some of our neighbours like City.

Do not get me wrong, there are actually millions of pounds of investment going into Charterhouse Square Campus. But who is investing that? Is it the College? No, it is Barts Charity. Do you want to know who has helped fund the recent changes to the BLSA Building, including expanded multi-faith space and fitness facilities? The senior management at Queen Mary baulked at investing any money into the SU. Instead, it was the Medical College of St Bartholomew’s Hospital Trust, another charity.

Are you noticing a pattern here? This is what they do not want you to know. Not only is Barts and The London an incredible community, but the Barts and The London brand is extremely valuable. Both for research and education. Medical degrees (and the other hard sciences offered at BL) are more costly to run than most degrees, but our existing identity as the oldest official medical school in England, as well as our School being based at the oldest hospital in the UK, it makes us extremely good value for money. And at a time when the university is supposedly making little money for itself, you would think the senior management would treasure these relationships, rather than spend money it says it does not have on questionable rebranding.

When I was running for election to BLSA President two years ago, I was branded a QM sympathiser. And perhaps I am. I am proud of Barts and The London, and probably know a bit more about it than most. I am also proud of Queen Mary, and probably know a bit more about it than most. Our research outputs as a School would not be as great if the School were not a part of a multi-faculty university like Queen Mary. But it is the senior management at Queen Mary with whom I have an issue. Half of them have been here for less time than I have, know less about the institution than I do and have much less of a claim to this university than we, the students, do.

And this is where my biggest issue lies. The senior management at Queen Mary are not listening to the students. It is not true to say that we have not seen any investment on Whitechapel campus. Say what you like about the Neuron Pod and its design, but it was a substantial investment. But its purpose is for public engagement. Noble as that it is, it is again about the external branding, our PR, the ‘so-called bigger picture’. This logo is also ‘the bigger picture’. What about internally? The senior management show little worry about students and what changes might benefit them. Students are the smaller picture.

Do you know how the senior management at Queen Mary describes these logo changes? A ‘quick win’. When they rebranded university signs last year to read both Barts and The London and Queen Mary University of London, what did they call it? It was a ‘quick win’. To me, it was a waste of money which we were told nothing about. But whatever floats your boat. Then they ushered in this logo. It has been three months and how many people noticed? It is another ‘quick win’.

Even the greatest of empires can crumble from within

I have said before, I am a QM sympathizer. I strongly believe ties need to be promoted between the School and the wider College. There are many opportunities available to all of our students if we have fruitful cross-faculty relationships. I am currently presenting Tales of BL with Mohsin, something about which we have approached the Schools of Geography and History (ironic that an institution which is so reputable for its history degrees is so neglectful of its own history).

But I was often reminded in my year as President that one cannot extend the hand of friendship if the other side is clenching their fist. This is the latest in a series of decisions which show that the senior management at Queen Mary have not conveyed interest in working together with students or with Barts and The London.

Do you want to know what the senior management at Queen Mary hates? They hate that some of the signs at the Gozo Campus read Barts and The London last year, not Queen Mary. Sorry, I think there are bigger problems out there for students in Malta than signage.

Do you want to know what the senior management at Queen Mary hates? They hate Merger Cup. Because it treats Barts and The London as separate to the rest of Queen Mary. Sorry, I might not be a sportsman, but even I understand the positives that healthy rivalry (provided it stays as such!) can bring to our students and the community.

Do you want to know what the senior management at Queen Mary hates? They hate the new history timeline outside of the Student Office in the Garrod Building. So much so that they threw a temper tantrum and threatened to take it down immediately. Sorry, I know it is talking about Barts and The London rather than Queen Mary as a whole, but we cannot forget about the some 870 years that Barts and The London existed independently before we merged together.

Do you want to know what the senior management at Queen Mary hates? Well, from all of this, one gathers that they must hate Barts and The London. And worse, we can only conclude that they hate our students, and all students at this university. It is like the bursaries all over again. ‘Let us not consult our students, we know what is best.’ Sorry, but this place belongs to us, the students, and also our faculty, our alumni, and the local community, none of whom are supportive of this change.

Published in Barts & The London News and Opinions