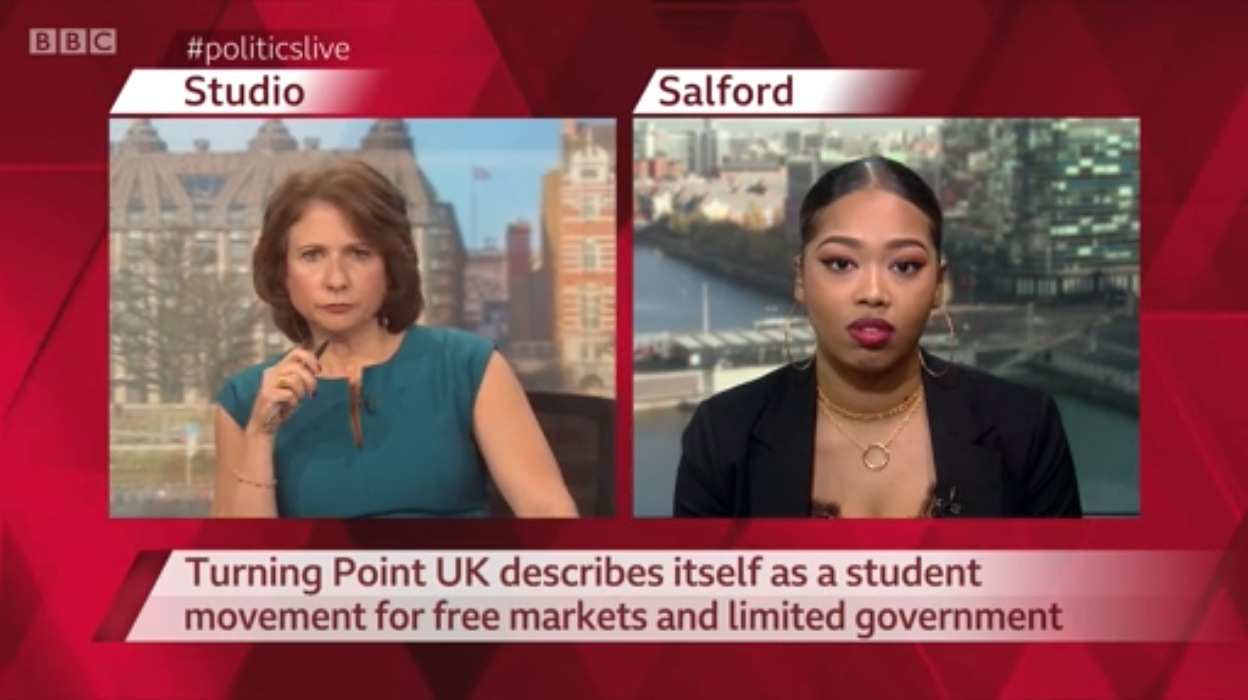 Yesterday morning, I had the misfortune of catching the last five minutes of Politics Live in which Turning Point UK ‘influencer’ Dominique Samuels was asked why she thought right-wing thought was being cut out of university campuses. She replied, “It’s the idea that having Conservative ideas is inherently evil and nasty. This is something that has become widespread throughout university campuses. It’s something that I have experienced myself. It’s time for this to be challenged.”

When the other panellists were asked to weight in, the conversation descended into a discussion about online abuse and whether Turning Point UK has links with the American alt-right movement. But let’s return to the original point: free speech on campus.

In the one week since Turning Point UK was launched, it has declared free speech at universities a pillar-stone of their organisation. The response to this has ranged from dozens of parody Twitter accounts targeting members of Turning Point to pitiful columns avoiding meanness about the newly launched group because the author “doesn’t have the heart.”

But the notion that free speech is a problem on university campuses and right-wing voices are being no-platformed is something that needs challenging… and challenging seriously.

When Turning Point talk about a lack of free speech, what they actually mean is that there is a lack of right-wing, pro-Brexit voices. These are not the same thing.

It is common knowledge that 18-24-year olds have always been more left-wing than right, getting more conservative with age. However, I did some digging and found membership of the Conservative Society at Queen Mary is roughly the same as the Labour Society (which is still lower than the membership of the Pokémon Society – but that is another issue for another day). Of course, this doesn’t reflect wider opinion on campus, but it does go to illustrate the number of students who are politically engaged enough to the point where they will pay society membership is approximately equal for the two major parties.

To Samuels’ point specifically; lefty students asking how she can be a person of colour and also support the Conservatives is not limiting her freedom of speech – it’s just stupidity, something that is not only allowed on campus, but flourishes!

Obviously name-calling is unacceptable, and I do sympathise with the constant burden of needing to explain your views. I don’t feel too bad though because engaging in debate is the definition of free speech – which is the reason we’re here in the first place. It would appear Turning Point isn’t about free speech, it’s about young conservatives wanting something they perceive young lefties to have: unchallenged thought. Whether they do or not is another issue… but I don’t think universities are even half as Corbynista as people think.

The way Turning Point UK appear to be going about dealing with their issue of campus censorship is puzzling. Appearing on Politics Live, receiving endorsements from various Tory MPs, and getting the attention of The Spectator/New Statesman is hardly an effective way to garner influence on campuses – especially amongst Student Unions’ (a place Samuels reckons is a hotbed for censorship). Surely the best way to ensure free-speech is allowed at universities is to engage with students directly rather than via daytime television? (By the way, being interviewed on a BBC show with viewing figures in the hundreds of thousands to moan about your voice not being heard is an irony not lost of me).

I wouldn’t want to be cynical, but Turning Point UK seems like nothing more than a profile-raising exercise for a bunch of young conservatives who want to be the next generation of centre-right political commentators. And so far, it’s working.

← Celebrate Chinese New Year in no better place than… China!
Unlocked Graduates: My experience so far →