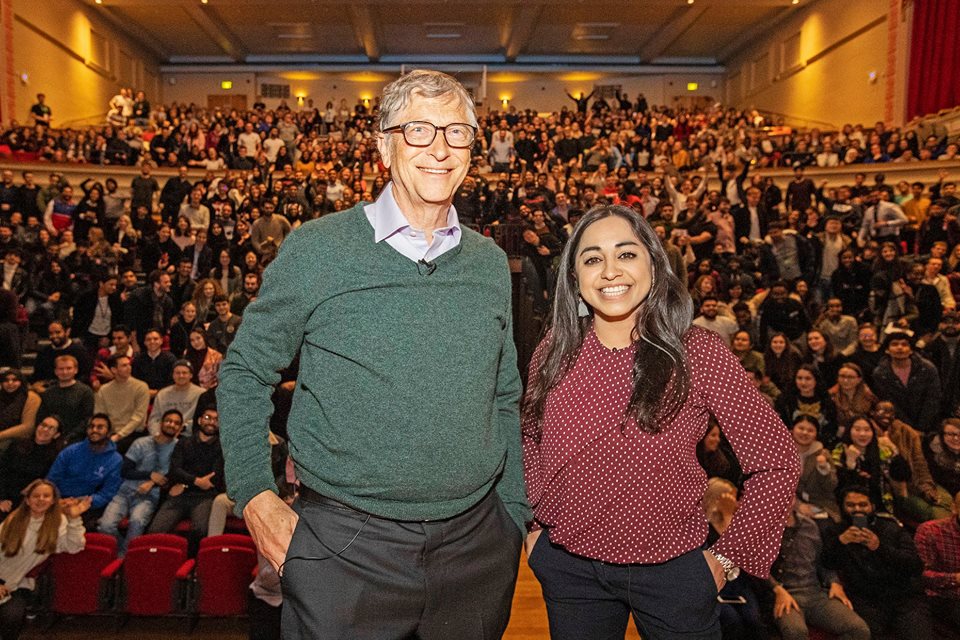 By Millie Pritchard on 28th January 2019

“What has been your biggest failure and how did you learn from it?”
An audience member poses this sizeable question to Bill Gates, and after taking a sip of his drink, he answers with “education is our great failure, and yet, we are not giving up.”

On the 25th January 2019, I was lucky enough to attend ‘A Conversation with Bill Gates’ hosted by our very own Queen Mary University of London. ‘Lucky’ in the fact that tickets sold out online in moments, and there was a clear buzz surrounding the event…

“I would have queued for hours if I had to.”

A young woman in front of me had just joined the queue for those with tickets, after she received an email barely before the event was due to start that she was able to take someone else’s place.
“I felt bad leaving my friends when I got the email.”

There was another large queue alongside the Queens Building running up towards library square made up of people who were unsuccessful in getting a ticket when they were released online. The woman and her friends had been queuing there since 2pm.

By 3:15pm, 15 minutes before the time organisers stated people should arrive at, the queue for those with tickets had already wound itself along the front of the Queens Building, and outside the university on the pavement, stopping beside the engineering building entrance. By 3:30pm, it was much longer, as was the queue for those without tickets.

By this time, the queue moved swiftly as tickets were checked and we were let into the building, but the event did not end up starting until a little past 4pm whilst organisers located those in the audience who asked the questions that had been chosen in advance.

Colin Bailey kicked off the event with a small opening speech highlighting the equal opportunities Queen Mary gives to educate all, stating that “we are proud of the diversity of our students.” He then introduces Shahidha Bari, a broadcaster and Senior Lecturer from the School of English and Drama, and Bill Gates himself. A roar of applause emanates from every corner in the room as they both make their way onstage and take their seats.

Gates sits relaxed with his arms by his side, but in a way, it appears as if he is sitting on the edge of his hands. Reserved, he smiles politely at the crowd as they give him yet another round-of-applause, with some ‘hoots’ thrown in for good measure.

Bari gently guides the conversation into serious topics, starting with the recently viral picture taken of Gates queuing for a burger in Seattle, asking what he ordered. She then turns to the audience to give advice on the best burger in Mile End, to which someone shouted “Dixie’s Chicken!”

It is made clear from the start that Bill Gates himself contacted Queen Mary to do a talk to students. Shahidha admitted that the first email they received from his secretary was almost reported as spam, and after talking to many students myself at the event, they all seemed just as dumbfounded at his decision to come to Mile End. He reassures us all that it was a conscious decision based on the diverse student body that makes up the University, as well as how QMUL engages with the local community. He stated that the decision to talk to students specifically is due to the fact that they are “open-minded” and will “shape where things go.”

One of the first questions Shahidha asks is about Gates’ passions, and what is exciting him currently in terms of his career and philanthropy, to which he replies “funding innovation, that’s my favourite thing.” An example he uses is a vaccination against malaria, which is a cause that he pledged to donate $1 billion dollars to back in 2018 through his foundation. He expressed his disbelief when he found out at the time that he had been the largest donator towards the fight against the disease. It does not take Gates long to get into the flow of things, and as the conversation between him and Bari progresses, he becomes much more at ease, and even somewhat animated, using large arm gestures to get his points across.

They move onto the topic of his rise to success, and his extreme wealth against the background of a world full of economic inequality, “It is unusual that you have people with so much money.”
He gets a laugh, before stating that his current wealth and status does have a lot to do with luck and the timing of his endeavours. He advocates for “more progressive taxation,” and is completely open about the fact that he has paid over $10 billion dollars’ worth of taxes.

On brand with the current climate, Bari poses a question to Gates regarding his stance on ‘fake news,’ to which he acknowledges that there was a certain “naivety” from “those involved in the creation of the internet.” He is, overall, interested in the conversation regarding the filtering of fake news online and its relationship with free speech, but he names it a challenge “for your generation,” referring to the audience. [For those interested, he also names two of his favourite sources in which he gets his news: The Financial Times and the Economist.]

The conversation then makes a natural shift to Gates’ view on the future, with one audience member enquiring as to what he thinks to be a “pressing” issue that young people will have to think about in the future. Gates names a few things, such as “climate change” and “pandemics,” but at the top of his list is the “equality agenda,” “Health and education are two primary promises that we aspire to for all people.” Indeed, health and education are the two things in which Gates strives to combat in the foundation he co-owns with his wife, the ‘Bill & Melinda Gates Foundation.’ As aforementioned, he believes as though they have failed in the vision they had for the education system in the United States, especially in comparison to the success in health. Along the same lines, another audience member asks what global health issues could be solved in 10 years. The only answer Gates gives for this is possibly malaria, but he states that in 20 years we could see the cure for Alzheimer’s, diabetes, and obesity. In terms of maternal health, he highlights that women’s rights for contraception is something which is a priority for his foundation, and it is a cause that his wife cares about deeply. The discussion also allowed for the clear quote of the night, “We bought a lot of condoms.”

A profound moment was where Bill exclaimed “we live in a world of shortage.” It can be quite hard to digest that statement, especially with it coming from the mouth of a multi-billionaire, but he urges it to the audience, drawing examples of world hunger and poverty. Although this extremely wealthy person does a lot in terms of philanthropy, it is not easy to overlook the fact that not every single person in the richest 1% of the population does donate the amount of money he does. That begs the question as to whether we are a world of shortage, or a world of greed.

The talk was drawn to a close on a light-hearted note, with an audience member asking whether Bill could still jump over a standing chair, a fact she had found in her research online. He stated that he had not done it in years, and probably couldn’t, as Shahidha joked that Gates’ secretary had seen the question beforehand and warned Bari to “not let him do it” onstage. It was announced that the event had come to an end, and Gates walked out of the theatre waving politely to a standing applause from the crowd.

As events go, this was obviously a shock to staff and students at Queen Mary alike. It is not every day where you get an email from Bill Gates wanting to come and give a talk to the students at your specific university. However, there definitely needs to be some sort of review in regards to the organisation of the event, as it is clear that many who wished to come to the event missed out. While things were still being set up, I became aware of a two rows on the front left of the balcony, 12 seats in total, which were still unoccupied. Seeing as though they had ‘Reserved’ signs on each of them, I thought that they would soon be in use by the time that things were underway. However, 10 of these seats still remained unoccupied for the whole of the event, with two being used by volunteers. There was also a single empty seat in the second row of the balcony which the people manning the event failed to pick up on. Upon asking a security guard whether everyone queuing without a ticket managed to get allowed in anyway, he stated that they were taken to a room to view the talk on a live stream. I asked whether everyone in the queue was allowed into those rooms, but he was unable to clarify the numbers.