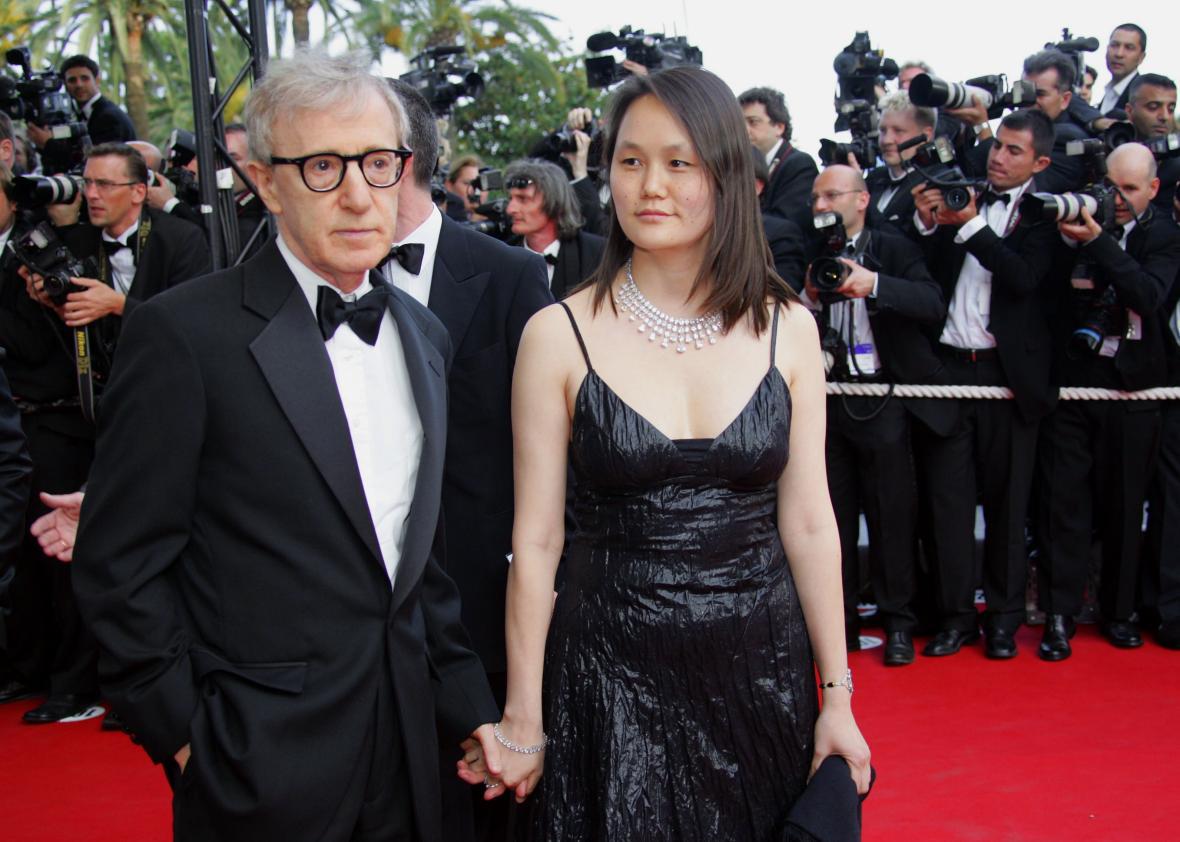 By Madeleine Goode on 17th November 2018
Everyone knows the story by now. World renowned filmmaker Woody Allen, director of heralded classics such as Manhattan (1979) and Blue Jasmine (2013), was accused in 1992 by his adopted daughter with then-wife Mia Farrow, named Dylan Farrow, of sexual assault. Dylan was seven years old at the time, and first only confided in her mother that “He instructed me to lay down on my stomach and play with my brother’s toy train that was set up. And he sat behind me in the doorway, and as I played with the toy train, I was sexually assaulted.” A judge ruled that there was too little evidence for Allen to be convicted of child abuse, but did state that Allen’s behaviour towards Dylan was “grossly inappropriate and that measures must be taken to protect her.” The allegations appear to have left Allen’s career unaffected, and he continues to make films to this day at the age of eighty.
This alleged assault came approximately one year after Allen had begun a romantic and sexual affair with Farrow’s adopted daughter from her previous marriage to André Previn. Soon-Yi Previn was adopted by Previn and Farrow from Seoul, South Korea at the age of approximately seven (she had no birth certificate, and her age was determined by a bone scan). She had begun living with Allen when he married her mother, one year after her adoption. The affair, it appeared, had begun in 1991 when Previn was aged 21. It was met, naturally, with media scandal, and was closely followed by Dylan Farrow’s allegations of sexual assault. Allen has protested his innocence since the beginning, and has claimed that Mia Farrow fabricated the allegations out of spite for the affair. Both Mia and Dylan Farrow have continued with their allegations, which resurfaced in the media last year during the rise of the #MeToo movement. Allen and Previn remain a married couple to this day.
Now, for the first time, Soon-Yi Previn has given an interview in regards to her marriage. Speaking to Vulture, a branch of the New York Magazine, she says, ‘what’s happened to Woody is so upsetting, so unjust. [Mia] has taken advantage of the #MeToo movement and paraded Dylan as a victim. And a whole new generation is hearing about it when they shouldn’t.’ This concern for the ‘new generation […] hearing about it’ is fascinating in terms of the way both Previn and Allen regard their image; there seems a disregard for sexual assault victims, or for the brilliance of the way #MeToo has revealed predators who had previously hidden behind their victims’ fear to speak out. It’s all about what the younger generation think of Allen, and in turn, what they think of Soon-Yi. And believe me when I say, young people do not intend to be complacent. The reason for this is simple — young people no longer take interest in the status of an alleged abuser. You could be the Joe Bloggs from Somerset or Harvey Weinstein; if you are an abuser, we don’t give a shit if your art is good or whether you’re contributing to whatever charity you decided will make you look like a good guy. If you rape women, you belong in prison. There isn’t an “if” or “but” in sight. And I believe that’s right.
Many actresses have, in light of #MeToo, apologised for having agreed to work with Allen. Oscar nominated actor and director Greta Gerwig has said that ‘I can only speak for myself and what I’ve come to is this: if I had known then what I know now, I would not have acted in the film. I have not worked for him again, and I will not work for him again.’ Of course Allen has been damaged by #MeToo. Young women are not afraid to admit that they believe women, and are not afraid to call out powerful men; a refreshing attitude that counteracts the seemingly untouchable status of Hollywood greats.
What’s concerning in Allen’s case specifically is that he’s vehemently defended by a woman who he once fathered, and afterwards sexualised. Allen himself has spoken about himself as a father figure towards Previn. Allen spoke to NPR in 2016, saying ‘I’m 35 years older, and somehow, through no fault of mine or hers, the dynamic worked. I was paternal. She responded to someone paternal. I liked her youth and energy. She deferred to me’. Of course, it’s very possible that they are very much in love and have a mutually respectful relationship. In fact, it’s probable, for a marriage that’s lasted 35 years. However, it simply can’t be denied that their relationship began in a father-child dynamic, and that the shift into a romantic, sexual dynamic when Previn became “of age” is troubling. Previn seems not to acknowledge it. To want to marry a woman who you consider a daughter is an odd place, psychologically, to arrive at Previn insisting that the treatment by the media of Allen has been “upsetting” and “unjust” seems entirely blind. Anyone presented with this case must be inclined to believe Dylan Farrow’s accusation — as they say, the proof is in the pudding. The fact Woody Allen has sexualised the young girls, the children, in his household is undeniable. The connection between Farrow’s accusation and Allen and Previn’s relationship is uncomfortably close, and the tragedy of Previn’s complacency is that she wholeheartedly believes the events are unrelated. Allen remains the powerful director, not just on the silver screen, but behind his own front door too.
Image – Pascal Guyot/AFP/Getty Images