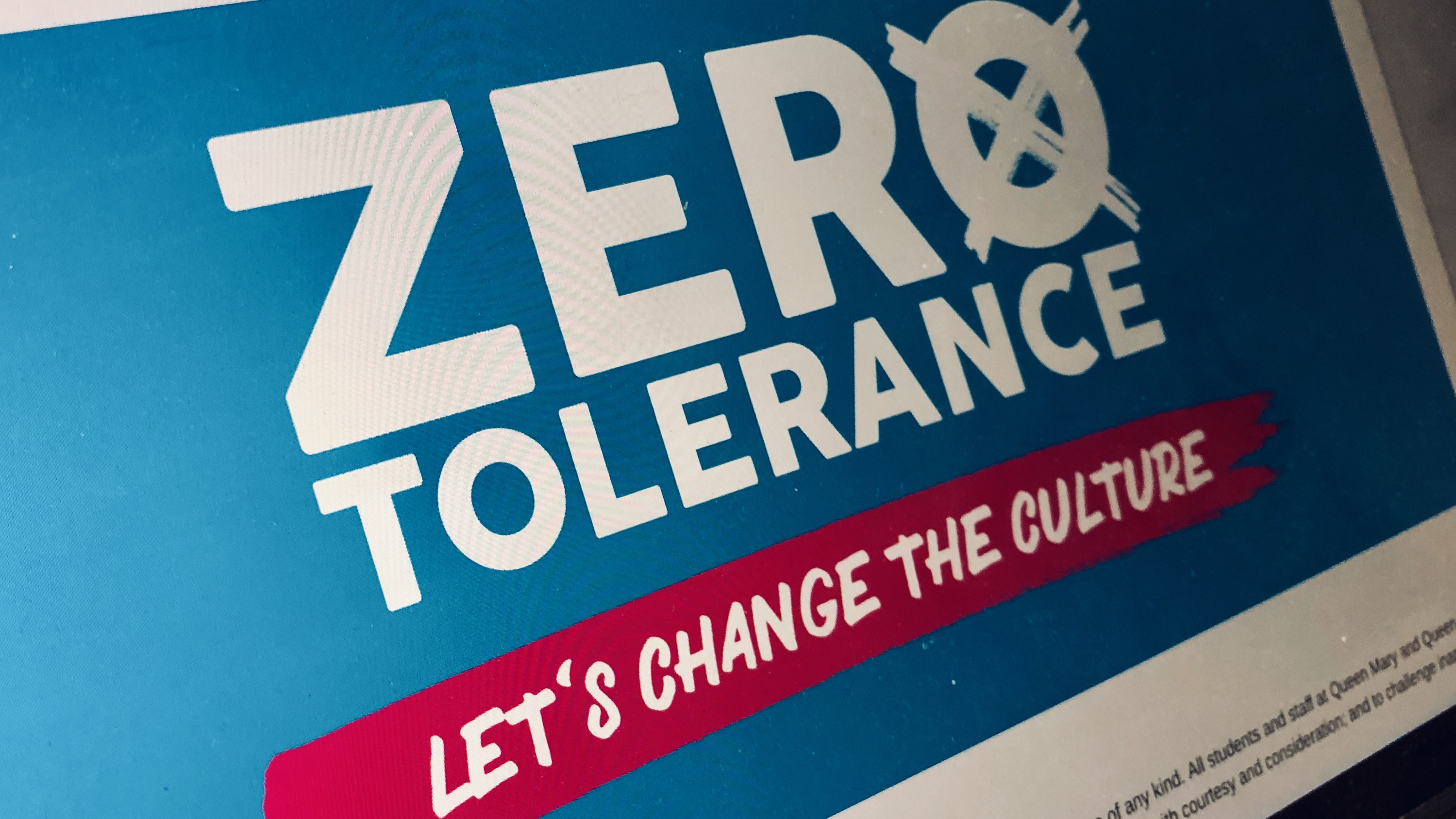 Queen Mary gets serious about dealing with sexual harassment

The Students’ Union and Queen Mary University have been working together to tackle sexual harassment and assault on campus.

All staff working at Students’ Union venues, including Drapers and The Griff Inn, have received ‘Good Night Out’ training on bystander intervention. The course teaches staff effective responses to harmful behaviour, challenging it and supporting the target of the harassment.

The training states that if the situation does not look safe for a bystander to intervene, they must swiftly alert security. The teaching also offers tips on how to give someone an ‘out’ to leave a situation and how to tell a harasser ‘stop’ or ‘this is not ok’ using neutral body language.

‘Good Night Out’ suggests ways bystanders can check in with someone even if it is loud. This can be done by giving a thumbs up or making eye contact.

The training additionally informed staff of the services Queen Mary has on campus if they do need to signpost someone who has been in a non-consensual situation.

Ella Harvey, VP Welfare at Queen Mary Students’ Union and the person who has been spearheading a lot of these changes over the last few months, said: ‘Everyone has a different understanding of what consent is – and that’s if they’ve even thought about it or been taught, so this is a really important safeguarding issue’.

Over the summer, Harvey met with venue managers at Drapers and The Griff Inn to discuss changes to their code of conduct. It was agreed that sexual assault and harassment should be reclassified as a ‘serious misconduct’, resulting in a lifetime ban from all Students’ Union venues – including Chislehurst sports ground bars.

The launch of the new zero tolerance campaign in mid-October coincided with Stop Hate UK’s Hate Crime Awareness Week. Harvey says: ‘It should have been launched in the first week of term but there were delays on the university’s side of things. However, the university has been responsive and are listening to what we want.’ The campaign launch saw new resources being added to the Students’ Union’s zero tolerance web page, including definitions of different types of hate crimes and links to where students can get support.

That week, the Students’ Union also ran a survey on hate crime which saw over 50 respondents in the first 90 minutes of the survey being live. The purpose was to highlight gaps in students’ knowledge so they know where to focus their attention in the future.

Harvey also worked with University Management to develop a student-staff misconduct policy which did not previously exist. She admits the university’s first effort at drafting this was too ambiguous and was not clear about the consequences. Upon Harvey’s request, the university soon changed it so the tone is more appropriate and goes on to explain the reasoning behind the policy.

‘Some lecturers will think “they are 18 and a consenting adult” when that is not the case because the student often cannot then revoke consent in those situations – therefore it’s not consent’, Harvey explained.

In 2017, The Guardian reported there had been fewer than three investigations into staff-on-student harassment allegations at Queen Mary, none of which resulted in staff leaving or changing jobs.

All full-time members of staff at the Students’ Union are going to receive consent training. Consent workshops are going to be run for university staff. However, these will not be compulsory.

Queen Mary is also in the process of hiring a ‘sexual harassment project manager’ in the Student Life team, (official title: Project Manager tackling Sexual Violence, Harassment and Hate Crime). The job description states that the post-holder will ‘work with colleagues from across the university and the Students’ Union to develop new roles, report pathways, processes and systems’. Although the position is currently part-time, Harvey announced at the October Student Council meeting she is lobbying for the role to be made full-time.

Harvey attends the zero tolerance working group and is lobbying the university to hire a pastoral member of staff who can look after sexual harassment cases. She explained her reasoning: ‘When students report cases of sexual assault, it is very traumatic and there’s not always a lot we can do for them because of the way the law is. For example, if a student reports a case of sexual assault by a staff member, when they go into the procedure of giving a report of what happened, they are effectively only a witness and barely a part of the process. They give their report and that is it.

‘Legally, they are not allowed to hear about the outcome of the case. The idea behind this is they only need to tell their story once, but it also means they don’t know the outcome or what that person [the accused] said either. It can be really difficult so there should be someone pastoral who specialises in that area of HR.’

Queen Mary is working on a new internal reporting platform for sexual harassment and assault. Currently, their website offers links to external services and support lines. However, since there are so many of these listed, it can be unclear to students which one will be most suitable.

Some reporting tools the university currently recommends (including Queen Mary’s own Appeals, Complaints and Conduct office) are just email addresses or basic submission forms which are often dubbed ‘ineffective’; they fail to immediately support vulnerable people who may be reporting crime and they are not anonymous.

The University of Manchester, Goldsmiths and the University of Essex all use a system called ‘Report and Support’, which allows students to report anonymously to an advisor. When reporting an incident, the system asks the user a number of questions, including if they are reporting for themselves or on someone’s behalf, the accused’s relationship to the university, and what faculty they are a part of. The user is then directed to an appropriate support service’s website and the incident is logged so it can be investigated further.

The website is praised by many hate crime activists but it is expensive, so Queen Mary is looking at producing their own similar platform which will be developed by the new sexual harassment project manager. It is predicted Queen Mary’s anonymous reporting platform will be launched before the end of this academic year.

SU President Ahmed Mahbub said: ‘This is the biggest win we’ve had in ages; zero tolerance is finally off the mark this year.’

The Students’ Union will be continuing to raise awareness of zero tolerance as well as where students can find support throughout the year, including sex and relationships month in January and LGBT history month in February.