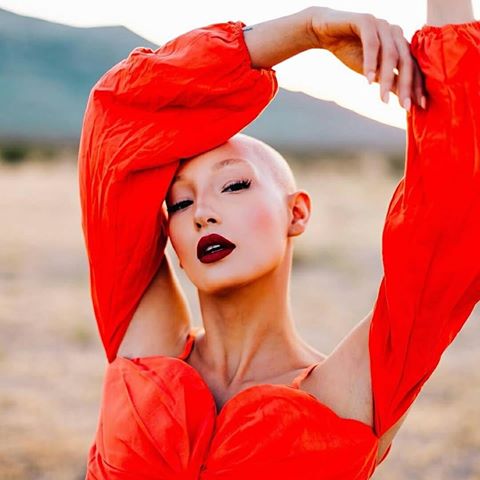 Contributor, Lara, explores the changing relationship between Alopecia and the fashion industry

From September 20th – 23rd 2018, London Fashion Week showcased a world first ‘fur-free’ fashion week. This followed a declaration from the British Council that none of the participating designers would be using fur within their showcases – a pioneering moment for British Fashion.

However, it’s not just the support of animal rights which has altered the course of style and beauty assessment. Currently, the British Fashion Industry finds itself situated in a climate of change, constantly challenging conventional expectations of beauty through pioneering movements; the new #AlopeciaIsFashion campaign is one such example.

Defined as the medical term for hair loss, alopecia can manifest in a variety of forms – androgenic alopecia, alopecia areata, alopecia totalis, ciatricial alopecia or traction alopecia. According to NHS England, in 2017 8 million women were said to be suffering with a form of alopecia. In an age where conventional beauty is defined by long, healthy hair, the alopecia community continues to be overlooked by fashion and beauty industries – an issue which #AlopeciaIsFashion aims to eradicate.

Founded by the Hair Heals Organisation and The Liverpool Urban Hair Show, #AlopeciaIsFashion strives to shatter conventional expectations in which hair is a prerequisite for beauty. One of the primary figureheads seeking to conjure an air of change within the industry is Liverpool based Director of Hair Heals, Claire Namukolo, the mind behind the #AlopeciaIsFashion movement. Having experienced hair loss as a result of childbirth, styling and excessive use of products, Claire aimed to channel her experiences into giving other women a platform to express their own unique form of beauty.

Ambassadors Eve Betts and Nichola McAvoy have pledged their support to the #AlopeciaIsFashion campaign, acting as models and spokespersons for the campaign launch. Both have openly discussed the ways in which alopecia has affected them whilst growing up; both have also spoken about issues corresponding to anxiety and self confidence which were triggered as a result of hair loss. Their aim is to integrate baldness into the standard perceptions of beauty and install enough confidence into young alopecia sufferers in order to transform the prospect of wig wearing into an optional, not compulsory, resort.

Thankfully, this air of positive social change is slowly beginning to filter into the media and break down the conventional, often completely unattainable, boundaries of conventional beauty.

To see Adwoa Aboah grace the cover of British Vogue and openly promote her shaved look as a mechanism for self accreditationis nothing short of groundbreaking. For icon model and actress Cara Delevingne to trade in her luscious locks for the bliss of the buzz cut is empowering in itself. To live in an age where Chrissy Teigen’s ‘Headband of the Day’ has made hair accessories a viable and fashionable way to disguise bald patches is humbling. Being able to learn of the personal hair loss journeys of public figureheads is admirable and reaffirming – such as the stories of Creative Director of Fashion Label, Rachel Fleit and actress Jada Pinkett-Smith, to name a few.

The #AlopeciaIsFashion movement is a mere scratch on the surface, but it is about to widen. Baldness is no longer defined as ‘doing a Britney circa 2007’, it has become a cutting edge trend. The entity of fashion. This symbolised by empowerment and confidence for women everywhere, from every walk of life.

To find our more about the variations and causes of Alopecia…
https://www.alopecia.org.uk