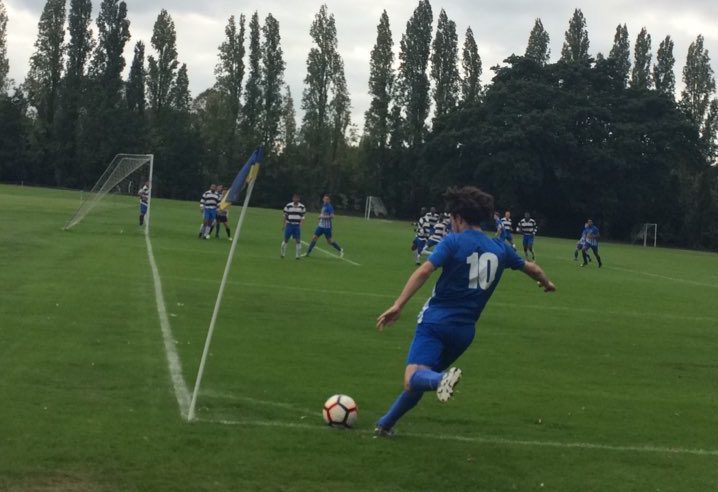 It was a battle of the best as the first and second team went head-to-head last Wednesday, with both sides out to prove a point. The 2s were looking to upset the odds whilst the 1s had to live up to their name and reputation, which they did in quite stunning fashion.

A resounding 4-0 scoreline to the 1st team was not underserved, with goals from Nana, Joey, Omar and the mercurial Ahmed proving their worth and living up to expectation.

The opening exchanges saw Usman test second-team ‘keeper Edgar, as the 1s looked to establish an early lead. Pio for the 1s and Chris Kyryakides for the 2s were dictating the play for their sides, continually being the creative spark as both teams looked to build from the back.

Captain Ahmed then went close to opening the scoring; a neat one-two inside the box allowed the former time and space but he shot straight into the arms of Edgar. The little magician didn’t give up however. On the 17th minute, Pio produced what can only be described as a stunning 55-yard, outside of the foot, cross-field pass into the path of the advancing Ahmed, who curessed a delightful first-time chip over the stranded Edgar. That goal knocked the stuffing out of the 2s whilst the first-team became even more dominant.

Manny, for the second-team, did set-up Nick but the vocal leader had hit shot blocked well. For what was a lacklustre performance by the 2s, the physical Manny did catch the eye and looked a real bright spark all game.

Just before the half-time break, Ahmed was once again involved as the first-team doubled their lead. Ashley done well initially, evading the challenges of two players before being brought down outwide. The resulting free-kick was swung in by Ahmed, and expertly tapped home by the energetic Nana!

After the restart, the 1s went up a gear in their play; A well worked move, which Barcelona would have been proud of, nearly saw another ball in the back of the net. Playing one-touch stuff, Nana found Adem who then played it to Joey who then chipped a through-ball to Omar but his low cross was just out of reach for the sliding Ahmed.

Then on the 65th minute, Joey Constable was played through and his cross-cum-shot looped over the goalie and into the back of the net. That made it 3-0 and was also Joey’s first goal in over two years.

It was two in quick succession as Omar added a fourth to the scoreline. After skipping past the left-back, Omar curled a delightful shot into the top corner, even striking the post as it went in. There was no chance Edgar could have saved it!

Omar shortly after had a free-kick tipped over the bar and Nana smashed a shot into the side netting as the clock ticked down.

Zac for the 2s nearly scored a consolation goal right at the death; After chopping inside from the left-wing, he tried an audacious 25-yard finessed curler but his effort went harmlessly over.

The first-team’s defence bellowed their desire for a clean sheet and they duly earned it, with the goalkeeper hardly troubled. The forwards meanwhile, led by the gallant figure of skipper Ahmed, ran riot upfront and punished a shaky defence, helping the team get their first win of the season.

He is the captain for a reason. A goal and an assist helped the 1s get the early lead in the first-half, knocking the wind out of the 2s. His calmness and clever vision were too much to handle the for the second-team, who were soon being toyed with as Ahmed produced flicks and tricks against them. The first-team’s overall performance was brilliant but it was Ahmed who stole the show!