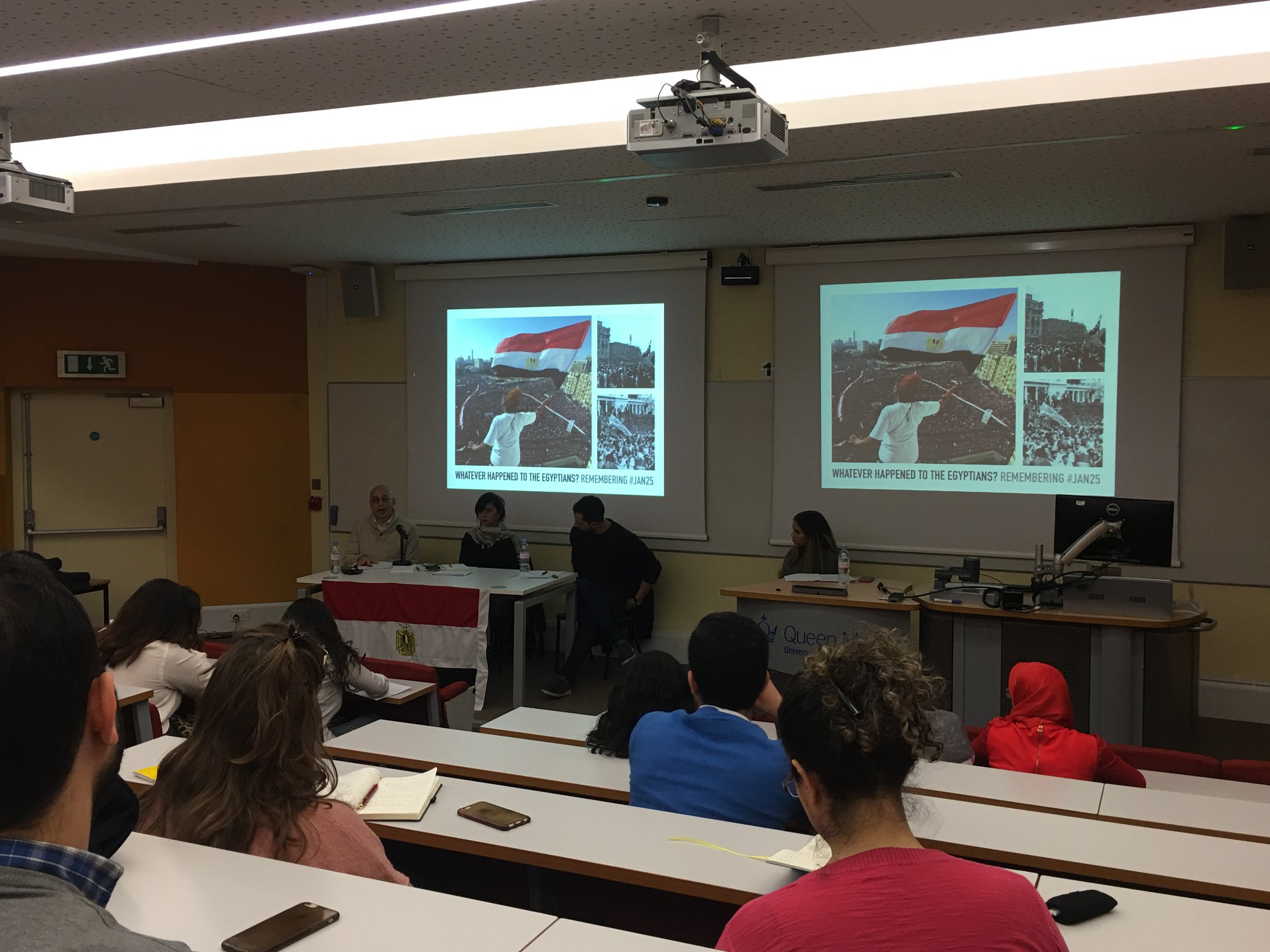 ‘Whatever Happened to the Egyptians?’

QMUL Egyptian Society commemorated the seven-year anniversary of the Egyptian revolution with a panel event on Thursday 25th January in the Fogg Lecture Theatre.

The event was titled ‘Whatever Happened to the Egyptians?’, taking its name from the popular book authored by Egyptian economist Galal Amin, and explored the trajectory of Egyptian politics and society since the 2011 revolt. People took to the streets to protest against the authoritarian regime of the president Hosni Mubarak, inspired by similar events in Tunisia as part of a series of uprisings across the Middle East known as the Arab Spring.

Mubarak was overthrown and Mohamed Morsi was elected as the president in 2012. However, Morsi was removed a year later following protests calling for his resignation and a coup d’état led by then Minister of Defence and now the current President, Abdel Fattah el-Sisi.

The questions posed to the speakers were to what extent did the revolution fail, and what the way forward is to a better Egypt.

Khaled Fahmy, professor of Modern Arabic Studies at Cambridge, kicked off the panel and declared that ‘today Egypt is more abysmal and darker than 7 years ago’, arguing that that there are an unprecedented number of capital punishment sentences being passed than ever before in Egyptian history, with thousands of people behind bars and presidential candidates forced to resign or disappear. ‘Not even under Mubarak was it so abysmal’, Fahmy lamented.

Fahmy noted that there was some merit to the work of Asef Bayat, author of ‘Revolutions with Revolutionaries’, who argued that the 25th January revolution was not radical enough in its outlook and lacked clear ideas of how to seize power, reform the economy or build a credible political movement but said this should be situated in a wider historical context.

Fahmy’s speech was at times doubtful about what the revolution had achieved, but at times hopeful. He stated that original ideas on issues like gender relations and city management arose out of the revolutions. ‘These are the single most set of important ideas to be put forward in Egypt since Nasserism. January 25th is still having a momentum’.

Dr Nancy Okail, Executive Director of the Tahrir Institute for Middle East Policy, spoke next and began by reflecting on a moment seven years ago when after initially being excited about the revolution, she started shedding tears when she saw people taking pictures with and glorifying the army as ‘saviours of the people’. Having worked in the Ministry of International Development to survey the impact of foreign aid, she had seen first-hand how much the army controlled matters. However she declared that it was the wrong question to ask whether things were better under Mubarak. ‘The most dangerous thing about authoritarianism is it is done under the guise of a better and noble cause: promoting democracy and stability during the War on Terror. This is a dangerous framing in narrative as it legitimises what the regime was creating’.

Dr Okail went on to explain how Mubarak was able to extend and hold on to his power for so long, and how Sisi was doing the same. She ended her speech by noting the importance of the international arena during the revolt, and how Obama praised the Tahrir Square revolutionaries as being on ‘right side of history’.

The last speaker, Hesham Shafick, a PhD candidate in the School of Politics, called the 25th January a ‘sad day’ which he did not want to romanticise, but the war was not lost yet. He argued that the revolution is still being spoken about today, and that the Occupy and anti-austerity movements took their cues from the Egyptian revolutionaries. Shafick disagreed with Fahmy that the revolution lacked proper organisation, pointing to labour strikes and factory meetings that proved other. ‘The answer to whether the revolution failed lies in what you consider a revolution to be’.

The panel was followed by a Q&A session to round off what was a very thought-provoking evening.