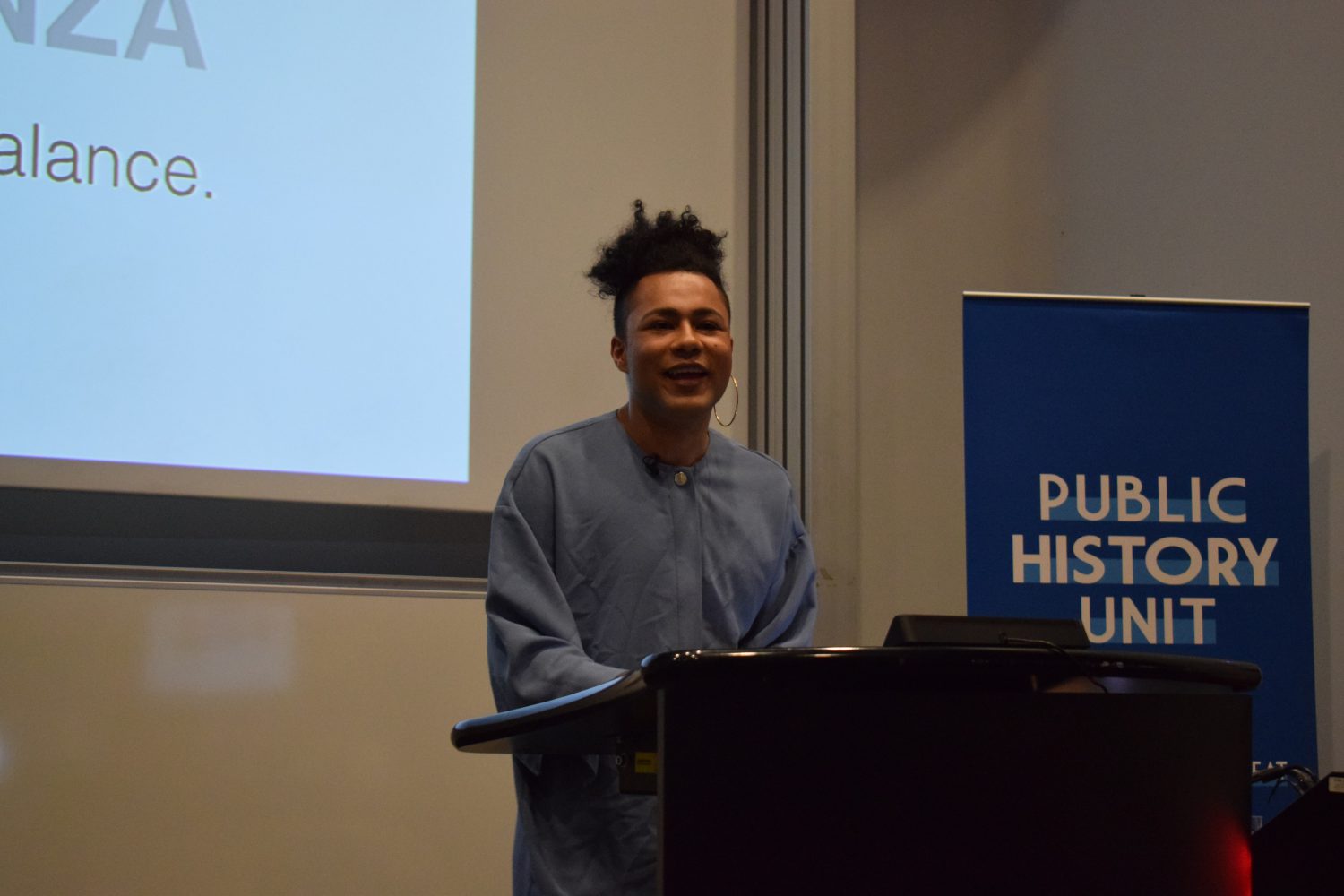 On January 22nd, Queen Mary’s Public History Unit hosted performance artist, writer, poet and activist, Travis Alabanza. Travis has published books of poetry, toured theatre shows across the country, exhibited works in the Tate, and, as a gender nonconformist, prefers to be referred to by the pronoun ‘they’. Consequently, their talk in Arts Two concerned trans rights and the ‘Trans Tipping Point’, a term first coined in Time in 2014.

Unlike other speakers, Travis actively encouraged their listeners to audibly agree or disagree with the arguments they made. Thanks to this more open style of speaking, as well as their lighthearted and comedic self-deprecations, the auditorium was frequently busy with applause. Such attempts to lower the barrier between listener and speaker was demonstrative of Travis’s argument.

From the start of the talk, Travis explicitly stated that they desired neither to sum up trans history nor to represent a whole demographic. Accordingly, their definition of ‘trans’ was a personal one: Not to adhere to the gender you were given as an infant without your consent. The idea that gender is separable from a person’s anatomy, let alone that it involves one’s consent, continues to remain a radical proposal in comparison to other liberal frontiers, such as third-wave feminism and gay rights. Yet, Travis’s informal style, characterised in frequent, cynical self-mockery – ‘I’m saying this because it’s dramatic and I want to hold your attention’ – was a far cry from the self-righteous, ‘special snowflake’ preaching often displayed in the media’s portrayal of trans people.

A great deal of the talk concerned problems of representation, which Travis termed, ‘Only show, no tell’. True to their self-aware oration, Travis confessed with a grin that they repeated this particular phrase because they liked the sound of it. In relation to the ‘show’ of media portrayals, Travis listed ‘The Times’ writer Janice Turner’s headline, ‘Children sacrificed to appease trans lobby’, and last year’s discussion over gender-neutral changing rooms. In July 2017, controversy was stirred when Travis was refused entry to a women’s changing room in a Manchester branch of Topshop and subsequently tweeted about the event. In reaction, headlines in papers, such as ‘The Telegraph’ and the ‘Daily Mail’, insinuated that women-only changing rooms had been abolished due to Travis’s complaint.

In truth, Topshop’s changing rooms have been gender-neutral since July. Furthermore, there is no record of transgender people causing harm in a changing room. Such a response in the media, suggesting that Travis’ comments alone could cause Topshop to change its policies, leads some of us to believe that large chains are willing to bend to the demands of a single individual. Reducing a nationwide cause to the hands of one person often relegates that cause to the corner of a privileged few, rather than equality for all.

The argument that those identifying as trans are presented negatively by popular media is supported by correlations between mainstream depictions, such as Caitlin Jenner appearing on the front of ‘Time’, and negative experiences on the street for trans people. To host a rich and famous MTF (male-to-female) as a representative for a whole demographic further cements the opinion that trans rights is a privileged issue when in reality this is a group that permeates all boundaries of class and income.

Negative experiences even include being heckled as a paedophile, which Travis experienced three times at a recent show at the Royal Exchange. As the statistics currently stand, two out of five trans people have experienced violence in the UK. The source of this abuse is exemplary of the problem that many of those who criticise Travis on social media for his identity are white, middle-class women, not the working class and uneducated demographic, often labelled the intolerant majority by media outlets.

The key to understanding the gulf between those who identify as trans and their critics is greater transparency. Speaking to the audience, Travis used their hosts, the Public History Unit for whom research is essential to understanding a topic, to demonstrate their argument: ‘Has anyone done research past the articles they’ve read about trans people?’. It’s a lack of knowledge that maintains transphobia, which in itself is caused by a lack of visibility: ‘If people do not see us how can they understand us?’. This is partly due to cis-gendered individuals writing the majority of articles about trans groups and it should be stated that I am myself cis-gendered.

Attending Travis’s talk at Arts Two has educated me about a subject which, in truth, I had previously associated almost exclusively with celebrities, such as Caitlin Jenner. I learnt that ‘trans’ covers a wide spectrum of individuals, not merely those who are seeking or have had Sexual Reassignment Surgery. And many people, who identify as GNC (Gender Nonconforming), often undergo far more abuse than those who ‘pass’ as the opposite sex. Whether someone agrees or disagrees with Travis’s statements, it’s essential that we educate ourselves beyond the sensationalist headlines. Perhaps in the future, individuals like Travis will be invited to Queen Mary to talk about subjects other than their identity.

Travis Alabanza’s upcoming events and their debut poetry book ‘Before I step Outside (you love me)’ is available from their website.