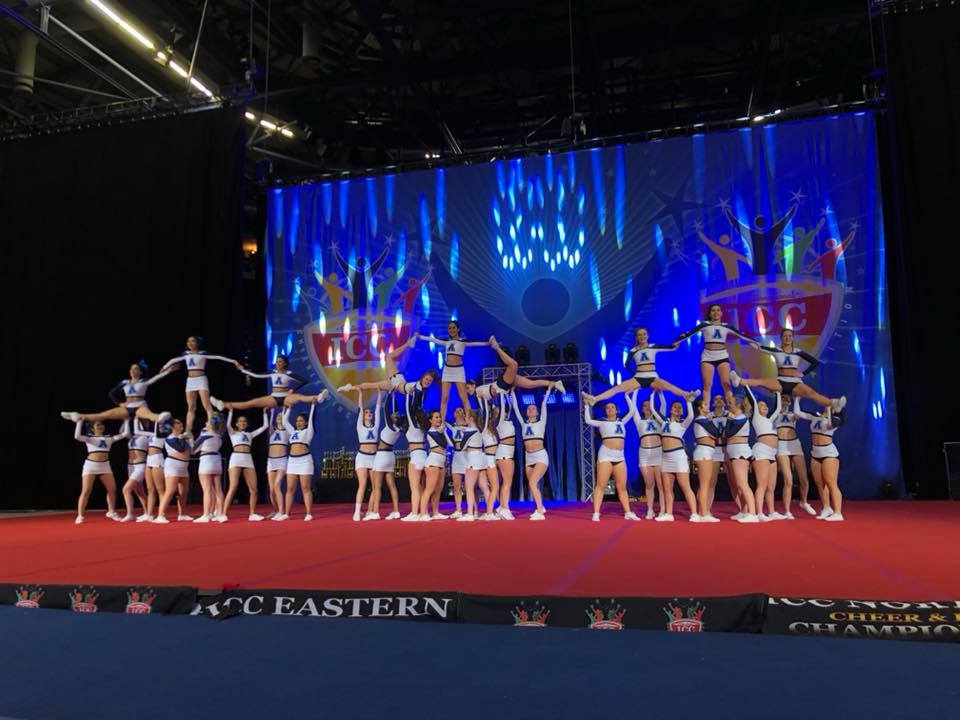 Queen Mary Angels is made up of 3 teams and almost 100 members, ranging from absolute beginners to more advanced athletes who have been with the club for years. This year has been an immensely successful year for the club as a whole, with the Elite level 5 team, X5, winning 2 gold medals, the advanced level 3 team, Aurora, winning 2 silver medals, and the all-girl Freshers team, Princesses, winning 2 gold medals!

Cheerleading at QM is more than just pompoms and chants, the teams work hard all year to put together two and a half minute routines that they take to Regional and National competitions for a panel of judges. These routines are made up of gymnastics, dance and stunting — lifting people in the air. There are no “try outs” required to join QMA, as the club is open to everyone who wants to join, regardless of experience. This year, the entry level team, Princesses, is the biggest QMA has ever had, made up of 38 girls, all of which were new to cheer when they joined in September!

The first competition was a regional competition called, Legacy Cheer and Dance, hosted in the nearby Copper Box Arena on Sunday 18th February. Unfazed by nerves, a large crowd and an intimidating panel of judges, Princesses performed a near perfect routine, hitting their stunt sections faultlessly, and finished off with a sharp, flawless dance. Their blood, sweat and tears paid off as they won themselves 1st place against 5 other teams. Flying high off of their success, Princesses trained hard over the next month to increase the difficulty of their routine, and ensure perfection. The second competition was a national competition, the ICC British Open, hosted at the Nottingham Motorpoint Arena. At 6am on Sunday 18th March, QMA travelled to Nottingham for a full day of cheer. After supporting X5 and Aurora, Princesses took to the mat at 6:30pm and performed an amazing routine, even more perfect than the last. Their confidence and enjoyment radiated from them, and the support from the crowd was unbelievable. No one thought it possible that they could top their previous routine, but somehow, they did!

Princesses won their second 1st place of the season, hitting zero, — meaning they performed a perfect routine without any deductions — a truly amazing achievement. Furthermore, they beat 10 other teams to the top, in the most competitive cheerleading division! Princesses captain, Polina Pogudina, spoke to The Print about these achievements, “I could not be more proud of my team this season! They all are new to the sport and have been working extremely hard with the best attitudes. We could not have succeeded so much without our head coach, Clare Winder, who choreographs our routines and with lots of patience, teaches us the skills from scratch! None of this would have been possible without the rest of QMA, their constant help and encouragement for the Freshers.”

QMA will finish their brilliant 2017/18 season next week as they travel to Telford for the British Championships, their biggest competition yet, where Princesses will aim to maintain their undefeated title, Aurora will go for GOLD, and X5 will compete for a bid to the European Champions, where they hope to return for a second year to take first place!

If cheerleading sounds like something you would like to learn next year then stay up to date with the club on social media, ready for the next season in September!