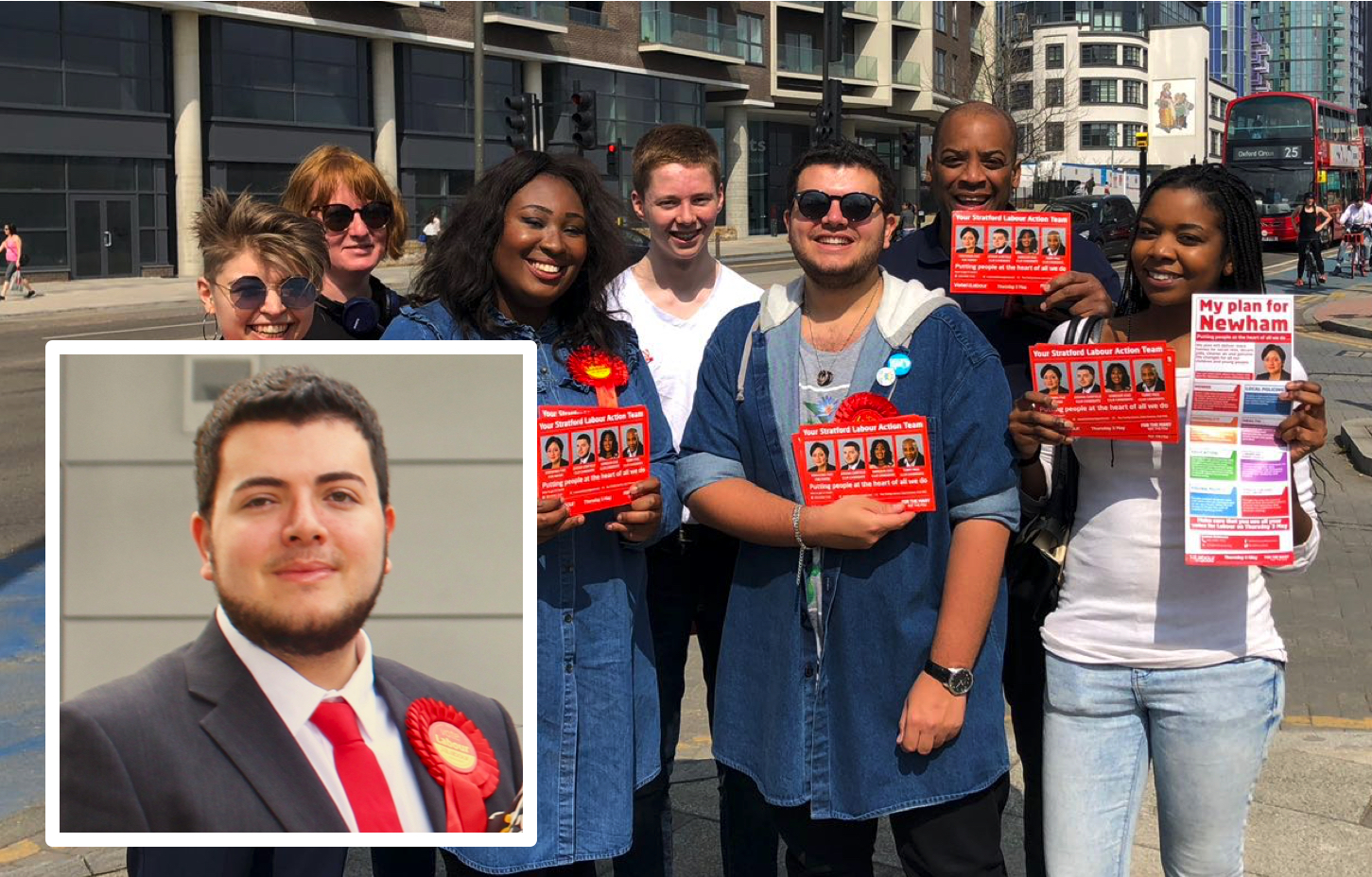 Queen Mary student Joshua Garfield is standing as a Labour candidate for Stratford and New Town in the upcoming local elections on May 3rd.

Joshua joined the Labour party in 2010 at the age of 15 under Gordon Brown and has since participated in internal campaigns and helped canvas in local elections. He has been involved in campaigning for Labour for a long time, as his family was always active in the party.

Born and bred in Newham, he decided he wanted to run to be a councillor after the dramatic shift in Newham politics in 2016 when the incumbent councillor of 23 years was challenged by Rokhsana Fiaz. Joshua says, “I liked the idea of working on a far more radical, exciting, and inclusive manifesto.”

He applied in August 2017 to be a Newham councillor candidate, however the process was delayed until the end of February – approximately four months after every other borough had selected their Labour candidates. He was then long-listed by the Stratford and New Town ward and then the members voted for him.

In 2016, there was a campaign to get a trigger ballot against the incumbent directly elected mayor, Robin Wales. Joshua explained, “The campaign excited me because we would be able to choose who we should select as our mayoral candidate for the first time since 2002.” Joshua said that he never left the Labour family however this was the catalyst that got him back involved in Newham politics.

After a lengthy campaign and a legal battle, the vote for an open selection won by a landslide. The contest eventually came down to the incumbent, Robin Wales, and Rokhsana Fiaz, a councillor for Custom House. Joshua worked on Rokhsana’s campaign. “It brought all shades of the Labour party together,” he said. “In some places you’ll read that it was some sort of Momentum takeover – but it wasn’t. If you looked at the makeup of her campaign, there were members of Progress, Labour First, neither – as well as people who had been in the party for over a decade and people who were new to the party. It was honestly one of the unifying campaigns I’ve ever been involved in.” After a two week campaign, Rokhsana made the selection.

Joshua says part of the reason for Rokhsana’s success was down to the people of Newham being keen to have a choice – something that they had not had before. Robin Wales, the previous mayor, had been council leader since 1995 and mayor since 2002 so had run the borough for Joshua’s whole life.

Newham is unique in the aspect that it has a directly elected mayor with a cabinet rather than council leaders. This system is one that has not been adopted by most local authorities as it tends to encourage independent governance and a lack of accountability. However, Joshua is confident that Rokhsana will run the borough in a way that involves residents in the decisions that need to be made. “She can breathe new life into the party locally and make it more outward-looking and forward-thinking.”

Rokhsana is planning to hold a referendum on whether Newham should continue with the directly elected mayor or opt for a council leader system.

Joshua admits that the Labour party in Newham is one that is in need of more scrutiny. Newham is often dubbed a ‘one party state’ because almost all 60 of the council seats are almost always won by Labour candidates. Joshua acknowledged, “We are a safe Labour borough but you should never take the electorate for granted.”

Housing is by far Joshua’s largest focus as there are not enough genuinely affordable homes in the area. Newham currently has the highest level of homelessness in the country which, according to Joshua, “is a disgrace since it was the borough that hosted the Olympics only six years ago.” Most of the people without a home sleep in the Stratford Centre however Joshua says the Carpenters Estate, where he grew up, has been derelict for some years now and there are homes there that are fit to be inhabited – even if it is just a temporary measure.

As for the plethora of modern high-rises that have shot-up around Stratford in the last decade, Joshua thinks the companies building them should be providing a lot more for the local community. “We’ve gone from a Stratford where nobody could ever imagine it being unaffordable or a place where you couldn’t be housed, to a place where local residents have been pushed out. The area has been improved but at a large cost.”

Joshua’s rationale is: if private sector developments are bringing more people into Stratford, then they also need to make provisions to provide more schools, GP surgeries, youth services, and resources to accommodate for everyone. “The profit they are making is ludicrous and all we’re asking is that they skim a little bit off the top.”

Youth safety is another priority. When we interviewed Josh at the end of March, there had been a stabbing in Newham only the day before which had been the 12th stabbing in London that week. In 2017, 22 young people were stabbed in Newham alone. “Although the causes are quite a few intersecting issues, one thing Newham could do far better on is their non-mandatory youth provision.” By this, Joshua means youth services that central government do not dictate that councils have to provide such as outreach programs, youth centres, and workshops.

As well as being a student, Joshua is also a youth worker in Hackney where he says he has seen first hand, that early intervention does prevent young people from being drawn into crime and “gives them the informal skills to make far better choices and achieve what they want to in life.”

“Hackney and Newham are neighbouring boroughs with similar demographics and similar problems. The difference is, Hackney spent almost £10 million pounds last year on their non-mandatory youth provision. Newham spent £400,000 on the same thing. The money spent in Hackney is spent wisely. There are teams who specialise in gang violence and prevention of young people joining gangs. There are teams who specialise in substance abuse. And there is a health and wellbeing team which I am a part of and we specialise in PSHE and sex and relationships education. There are also youth hubs across Hackney which young people can use free of charge where a whole variety of workshops are held from songwriting to dancing. Youth crime in Hackney has decreased and youth crime in Newham has increased. These teams, hubs, and workshops aren’t the only measure of prevention but they are a massive one as they offer young people a choice.”

“If a young person has struggles at home, and is struggling at school, and the school – being stretched – can’t offer any other provisions, it doesn’t take an expert to figure where that person is likely to turn. There are families in Newham who are scared to let their children out of the house and this is something that I drastically want to change.”

As for his take on student politics, Joshua says, “It definitely interests me and I’ve always voted in the elections but I think mature students, of which I am, are overlooked a lot of the time. Maybe this is something future Students’ Union candidates should consider?”

We asked Joshua about his higher political ambitions beyond being a Newham councilor. He rather frankly stated, “Right now, I’m looking forward to representing the residents of Stratford and New Town if they choose to elect me in May. That is 100% my focus.”

The local council elections are on 3rd May 2018.