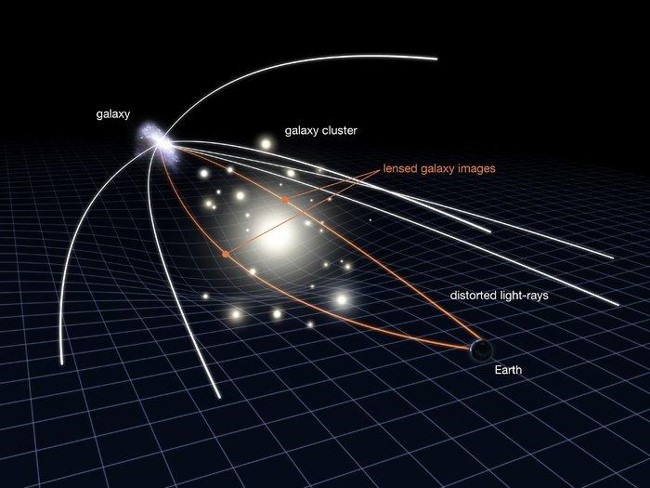 Natural Space Telescope allows astronomers to venture further than ever before into deep space.

A team of international scientists witnessed the largest effects of gravitational lensing on record, from Hubble Space Telescope.

Earlier this month, astronomers from the University of Hawaii, Manoa reported the largest instance of gravitational lensing to date. Gravitational lensing is nature’s telescope. It is an effect predicted by Albert Einstein and confirmed since the solar eclipse of 1919, which magnifies the image of an object in front of the source, due to the bending of light by mass, due to gravity. The magnitude by which this phenomenon occurs depends on the mass of the object bending the light.

This discovery marks the biggest instance of this phenomenon, suggesting a large mass behind the object in sight. In fact, the team of researchers were observing a sample of huge clusters of galaxies when they found a distant galaxy called EMACIJ1341-QG1, which was magnified by a factor of 30 due to space-time distortion caused by the massive cluster Emacij1341.9-2441. Elbing, University of Hawaii research team leader explains “This discovery stands out, as huge magnification provided by EMACIJ1341[.9-2441] allows us to study a very rare type of galaxy”.

Enormous structures bound by the force of gravity like galaxy clusters act as big magnifying lenses in space all the time. So, it is no surprise that this galaxy cluster led to this effect – but the amount by which it did, was.

Researcher John Richards of University of Lyon added “The very high magnification of this image provides us with the rare opportunity to investigate the stellar populations of this distant object and ultimately, to reconstruct its distorted shape and properties.”

This gives scope for greater understanding of the origin and evolution of distant galaxies in our Universe.