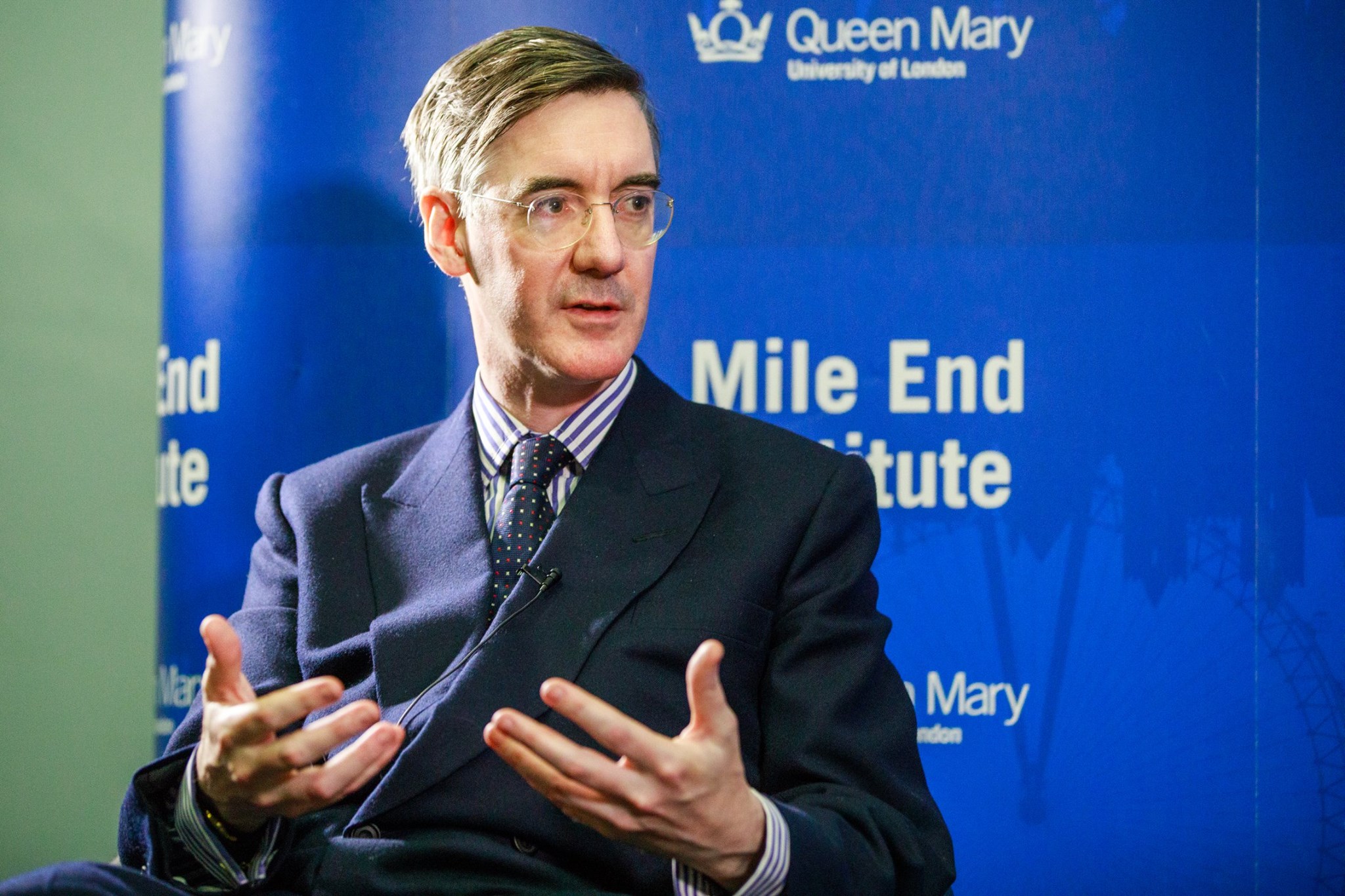 On 1st February, Jacob Rees-Mogg, Member of Parliament known for his controversial views, was the most popular yet reactionary visitor in the Mile End Institute’s ‘In Conversation With…” series. Rees-Mogg’s visit sparked a protest on campus, yet he was the quickest politician to sell out the event since the series launched.

The protest taking place outside of the venue grabbed the attention of everyone on campus. It is not difficult to believe that a politician such as Rees-Mogg, who is on the most reactionary wing of the Conservative party, would receive this sort of negative attention at a predominantly left-wing University like Queen Mary. But, when asked about this, Rees-Mogg did not seem phased, instead saying that “I am very flattered that there are protestors outside… that means they want to engage in political debate”.

His controversial opinions on social issues were almost guaranteed to be discussed. This began when an audience member asked whether, were he to be elected as Prime Minister one day, he would try to promote his views (notably his pro-life, anti-gay marriage stance). Rees-Mogg replied saying, “all these votes are free votes, they are conscience votes, and the conscience of the country is not in the same place as my conscience, but I believe in freedom of conscience, and I believe in democracy”. Thus, it was made clear that Rees-Mogg does not wish to impose these values onto Britain due to his understanding that it is not the popular consensus.

Further to him being asked if he would run for leader of the party, Rees-Mogg emphasised that “we can look at history… I’m a backbench member of parliament, and in parliament no backbencher has ever gone on to be leader of the Conservative party.” However, Rees-Mogg did say, “I greatly appreciate the confidence that people are showing in me” when asked about his favourable odds to be the next party leader.

For now, however, Rees-Mogg made clear that he does not see a place for a leadership election anytime soon, as he supports current leader Theresa May and “I would not sign a letter calling for her to go.”

Mogg was also teased on his reliance on the family ‘nanny’ to look after his six children, and scolded for having never changed a nappy. Having his stay-at-home wife and nanny do such things is “simply the practicalities of life.”

He also made clear that he has never been to an IKEA, as “I’m not Mr Flatpack”, but described Wetherspoons as “a great Eurosceptic chain”.

Brexit was another key point of discussion, with Rees-Mogg agreeing that “anyone who was here [before Britain leaves the EU] legally should be welcome” as they have gone through the mental and physical strain of leaving their country for another. He also suggested there should be a different system after we leave the EU, as he holds the belief of an implementation period, in which changes are pre-planned and implemented, rather than a transition period.

However, Rees-Mogg did dubb the Treasury reports and statistics as a “constellation of the stars”, arguing that the effects of leaving the customs union will not be as devastating as the Treasury purport.

When asked about Jeremy Corbyn potentially being the next Prime Minister, Rees-Mogg exerted his Conservative values about how his party is best positioned to create opportunities for the young, particularly in regard to continuing to aim for a property-owning democracy. He also expressed his belief in the positive attributes of universal credit.

“You make better choices about how to live your life than I can for you, I don’t believe in the socialist approach where the collective is more important than the individual, and I don’t therefore believe you should be nudged in living your life in the way that I think is good for you”.

Regarding University fees, Rees-Mogg explained that “if you don’t pay for it, it will have to be paid by someone else… you may think it will be paid for by some mythical billionaire but it will not”. Here, Rees-Mogg explains his belief in responsibility for higher education through the Student Finance England system rather than Universities being paid for through increases in national taxes. This would mean every citizen paying to fund higher education even if they did not attend University.

Mogg spoke fondly of the need for an efficient, welcoming system for asylum seekers in the UK, “we are a land of liberty, and we believe in liberty for everybody, and we believe in the rule of law for everybody, and that means respecting the rights of all people who are this country, but we also need to have a system where people who have broken the rules can be safely deported, it is not always easy to get the balance rights and mistakes will be made… but to be holding someone in that situation in indefinite detention would be deeply troubling”.

Despite his sometimes old-fashioned views, Rees-Mogg had more popular opinions when asked about the possibility of better maternity leave policies for female MPs, describing himself as “extremely sympathetic as long as its voluntary”. Rees-Mogg also stands behind diversifying the House of Commons as “we need to be able to get people who have come from deprived backgrounds to bring their experience in”. He made the joke that the Commons would be a very “boring” place if all MP’s were like himself.

Furthering this, Rees-Mogg had some surprisingly lax views on whether a politician’s past matters so much. He claimed that it needs to be “contextualised and balanced”, and said that social media is such a huge part in the lives of young people today that this needs to be taken into account. He joked that “people of my age who are relatively new to social media, need to understand that people of a younger generation have put everything onto social media. Do we really want to elect people who, at the age of 12 decided that they wanted to be politicians, so never put anything on social media that could come back to haunt them?”

Regarding revitalising Conservative party membership, Rees-Mogg expressed that he believes the party needs to focus on giving “oomf to the local party as you need some invigoration, some excitement, and an energy about it”.

As usual with the ‘In Conversation With…’ series, Philip Cowley asked Rees-Mogg what advice he would give for a young person desiring a career in politics. Rees-Mogg replied that perseverance is key, and that “you have to keep on throwing your hat into the ring again and again until people get bored of throwing your hat back at you”.