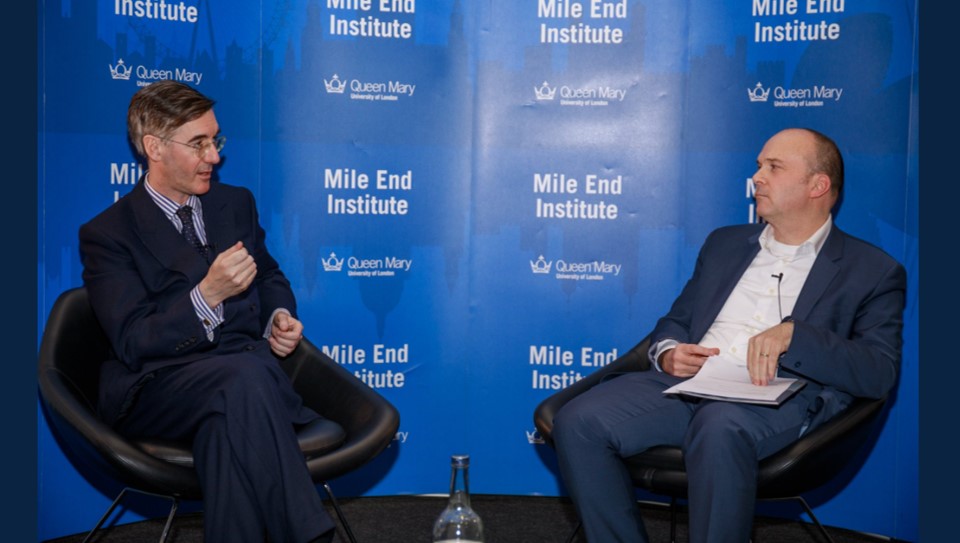 Jacob Rees-Mogg – he can find his way out

On Thursday, February 1st, Jacob Rees-Mogg MP visited the Mile End campus of Queen Mary, University of London. His visit caused quite the stir, as societies of the University got together and organized a protest against his presence.

In order to understand the outrage, a brief summary of who Mr. Rees-Mogg is, is required. Born in London to a wealthy family, he attended some of the most prestigious educational institutions, including Eton College and Oxford University, where he studied history. Ever since 2010, he has been representing the constituency of North East Somerset which he easily won in 2011, 2015 and 2017. In fact, the more controversial his opinions became, the more votes he gathered.

A man who seemingly embodies the most traditional sense of Englishness has been tapped by the media to replace Theresa May, while reports of an impending coup in the Conservative Party continue to swirl due to the dissatisfaction of Conservative MPs with May’s leadership.

His track record reads like a manifesto against progress. He has repeatedly voted against the decriminalization of abortion, consistently voted against equality and human rights and, the pinnacle of his campaign, he has been an outspoken protester of gay rights in any shape or form. His welfare stances are also unmovable, with a steady vote against the expansion of welfare benefits for individuals with illnesses or disabilities.

He is additionally a proponent of zero hour contracts, which leave workers unprotected from cruel schedules and a lack of benefits. His presence at the Mile End campus was just another stop on his university tour, and in most stops he has faced some type of reaction. His visit to the University of Bristol ended in an altercation between the attendees and found Rees-Mogg right in the middle of it.

It’s no wonder that societies at QMUL worked together to protest this event. He stands against everything Queen Mary stands for. The university has taken every measure possible to make its atmosphere one of tolerance, acceptance and progress. It is an environment where thousands of different individuals can come together and share various, sometimes conflicting, opinions with each other but all within the framework of respect.

Rees-Mogg’s politics and demeanor are a reminder of a rather polite and slightly more constrained Donald Trump. He insults you with politeness, a level of passive aggressive that is hard to come by and valuable for politicians of his kind. He represents the oldest and most restrictive principles of the Conservative Party, those that the government has long tried to soften in order to appeal to younger voters who are attracted to inclusion and progressive policies and governance.

So why let him speak? Despite one’s views, everyone deserves the right to speak and express their opinions, even if they are against the very character of the university; there are those within the university who agree with them and have to be represented just like those who are in disagreement.

However, is there a line, which once crossed, where this rule doesn’t apply? Is there a view and stance so abhorrent that will negate that right? And if so, who gets to decide when that line has been crossed? And speaking of backward views, why is the world so intent on returning to older and more extreme political views? There are two theories I can offer as answers, both given to me by an old history teacher of mine.

She said that at the beginning of each century, there is always some upheaval and some crisis that characterises it. In the beginning of the 20th Century, the stock market crashed, the Suffragette movement gained ground through intense protests and so on. Then she said, as a result of the crisis, the extremes always have a tendency to rise, as if they’ve found ground to stand on. They lurk in the shadows when all is well, but the moment doubt and fear set into our lives we are attracted to radical ideas.

The beginning of the 21st Century, which we are still crossing, found the world suffering from one of the toughest economic recessions and just like clockwork the extremes rose. Greece elected a Socialist left party for the first time, the United States elected Donald Trump whose conservative agenda is tasked with undoing everything the Obama administration has achieved, Marine Le Pen was one of the two prominent candidates for President of France. Her agenda was also against immigration, which brings us to the fear inducing political contraption: immigration. Trump, Le Pen and Rees-Mogg are all against immigration and their ideologies tend to align frequently.

We are currently at a crossroads moment, not just in the United Kingdom, but all over the world. The crisis has been knocking on our doors for a decade now, most of us have even grown up alongside it. The youngest generations are armed with the values of respect and the need for equality. We are the barrier between further extremism and a better future.

Hate campaigns and backwards politics may have some ground to stand on with the older generations but they fall on deaf ears with us. Jacob Rees-Mogg’s potential candidacy as the leader of the UK shouldn’t even be a possibility because he will only bring shame to the office that was once led by leaders like Mr. Churchill and Clement Attlee.

The students all over the country, including those at Queen Mary, are taking a stand. We are confident that Mr. Rees-Mogg can find his way out.