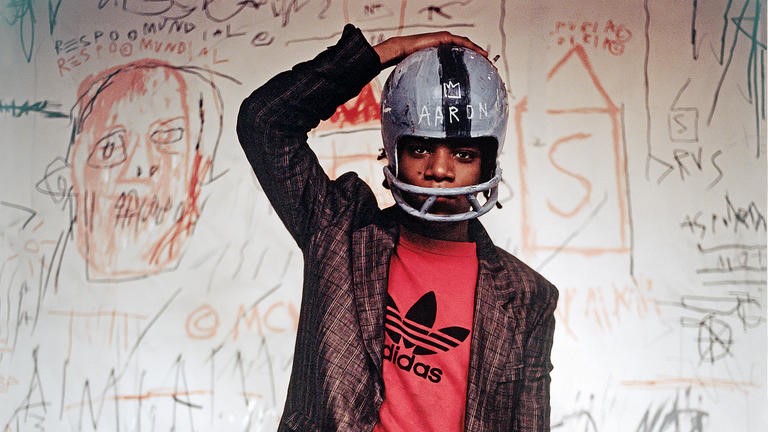 A review of Basquiat: Boom for Real

By Gabrielle Agyei on 6th February 2018

When you think of the exhibition certain stereotypes come to mind: a large room with whitewashed walls that hang traditional paintings from who-knows-when. Silence as people peer at the pieces with such intensity you’re left wondering what you’ve missed in their brush strokes. You may be thinking something like this but, when it comes to the ‘exhibition’, the Barbican’s Basquiat: Boom for real is the complete opposite.

Jean-Michel Basquiat (1960-1988) calls into question what we define as art. Many of us have come to associate it with realism; pretty sculptures and detailed paintings that make sense. They can be understood immediately and their meticulous attention to detail makes them beautiful, even grand. But what of artists who in some ways challenge this? Upon entering the exhibition space I was immediately faced with this question. His pieces show no regard for such a limited thought process.  Bold lines and crude drawings, that in instances are reminiscent of childhood scribblings, confront you. It’s brilliant and completely perplexing all at the same time with his work seeming to express rather than explain.

The first room of the exhibition, ‘New York/New Wave’, houses a variety of pieces. From graffiti works to photography and large painted canvases one experiences a kind of sensory overload. For a minute I was left perplexed, not expecting to be thrown in so completely straight away. But that’s the beauty of Basquiat’s art, it’s engulfing. Moving to ‘Canal Zone’, one is presented with collages and postcards using bright pinks and electric blues. Carefully cut out images are pasted against others with interesting phrases to create dynamic and thought-provoking works of art.

One of the most notable rooms was ‘Warhol’ with Arm and Hammer II, 1984 leaving a lasting impression. Warhol has painted two of these large scale logos onto a gold canvas. Basquiat has completely transformed one of them, painting a black saxophone musician over the image as well as crossing out the brand name. His use of strong reds, yellows, blues and the tone black against a gleaming gold backdrop is truly breathtaking.  Just the rich use of colour alone left me standing in front of the painting unwilling to move.  Warhol and Basquiat’s styles completely contrast and yet so unexpectedly tie together to form a striking piece of art. This piece was the product of collaboration and a real friendship. Standing there in front of that painting I felt myself smile a little. I was able to connect – his art made me feel.

There is something very human about Basquiat’s works. They feel raw with their messy lines and unapologetic application of colours and materials. The pieces seem to move and flow, constantly changing as you look closer to reveal more detail. Works such as Ishtar, 1983 are perfect examples of this. The triptych uses vibrant blues, greens and hieroglyphics amongst figures and, with further inspection, layers of photocopied drawings. There’s this constant toying with images and mediums to create pieces that are almost overwhelming. They refuse to be ignored and this wild approach expresses a sense of freedom. This is what makes Basquiat’s art, and the exhibition as a whole, so refreshing.

His work had been curated over two floors, and whilst walking to the upper level I was confronted with huge words forming the sentence ‘I never went to art school…. I just looked…. that’s where I think I learned about art by looking at it’. The breadth of his work speaks true to this as in all fourteen rooms various techniques and approaches can be found. Basquiat was not only a painter but played with media including poetry, music, graffiti and performance.  Each room exhibited a little piece of this fluidity. As an artist Basquiat realised the need for experimentation. A sense of fearlessness and a disregard for boundaries is one of the many things to be taken away from the experience.

Even as a young artist, and having died so young at the age of 27, Basquiat’s artwork speaks to the importance of truly living.  Practicing during the 60’s and 80’s, a time of great racial prejudice (his mother was Puerto Rican and his father Haitian), he became one of the most notable artists of his time. To me, the exhibition expressed that life needs to be lived in the same way Basquiat made his art: freely. Instead of trying to make sense of it all through the words of others, we must find our own language. One that makes sense to us and gives us a voice.