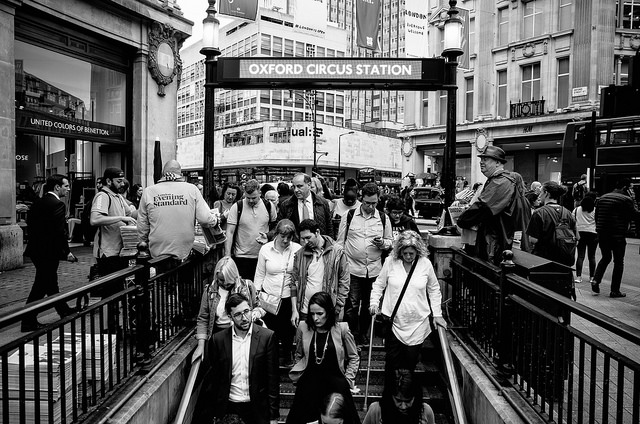 Accessibility and tradition versus pedestrianisation and environmentalism

When we think of a traffic-free Oxford Circus, our mind probably harks back to the time before cars dominated the streets. Today, the elusive sight of clear roads in the city is only encountered in the early hours. However, with plans in place to pedestrianise Oxford Circus by the end of this year, cars are set to become a distant memory on London’s busiest street.

Plans to make Oxford Circus more shopper-friendly were unveiled in November 2017, with the first part of the revamp set to coincide with the introduction of the new Elizabeth line. The transformation, which is estimated to cost approximately £60 million, will see road levels raised to the same height as existing pavements. The proposal has been put forward in the hope of tackling and reducing accident, congestion and collision rates. And along with bringing clearer streets, there are hopes that the change will heighten our chances of clearer air in the capital, answering the poor air quality concerns.

Oxford Street – officially named Europe’s busiest shopping street – is said to contribute £7.6 billion to the UK economy. While many factors influenced the decision, the public experience is at the forefront of the change. Sadiq Khan spoke of the transition as “a hugely exciting moment for the capital”.

He went on to say the following: “Oxford Street is world famous with millions of visitors every year, and in just over a year the iconic part of the street west of Oxford Circus could be transformed into a traffic-free pedestrian boulevard. Whether you’re a local resident, a business or shop in some of the area’s famous stores, our plans will make the area substantially cleaner and safer for everyone, creating one of the finest public spaces in the world.”

In a public consultation last year, 60% of the 12,000 people involved supported the change. However, as is the case with radical changes, there are undoubtedly those who have met the proposal with disapproval. The Licensed Taxi Drivers Association criticised the move, arguing that the change will act as an inconvenience for passengers – in particular, disabled passengers.

Uber, on the other hand, who have experienced their share of controversy in recent months have supported the move: “We share the mayor’s commitment to ensuring the centre of London remains an attractive place for people to work, visit and spend their time – and that the whole city remains an area in which people want to live. We agree that traffic free areas can help meet this goal by encouraging more people to use public transport to access areas like Oxford Street, reducing the need for Londoners to drive their own vehicle into the area.”

However, listings of such benefits have not done much to reassure residents of the area – particularly those within the Marylebone area – who are concerned about the effects that the rerouting of traffic will have. Passengers and residents have been reassured, however, that two routes that serve the area – bus numbers 139 and 390 – will be rerouted to run through Wigmore Street, Henrietta Place and Cavendish Square and that new taxi ranks will be introduced.

While the outcome remains uncertain, what remains clear is the struggle between whether we should accept Oxford Circus for its renowned charming and chaotic atmosphere or if we should adapt to what today demands of us. The plans that will transform the heart of the capital are set for completion by 2021.