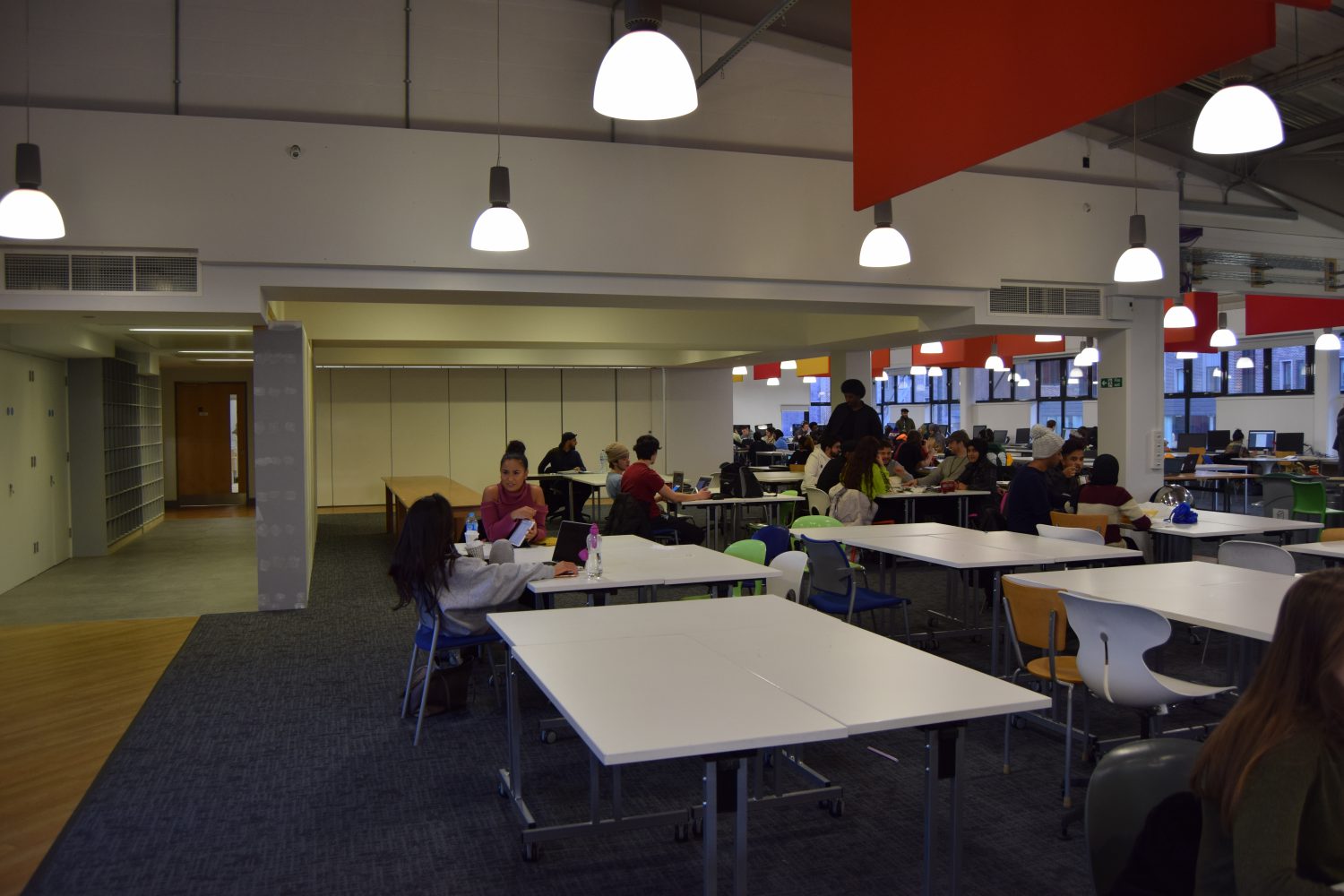 By Gracie Browning on 15th February 2018

The space in the SU Hub, which had previously described as “a zoo”, has been completely refurbished in the hope it will ease demand for study space.

Following years of requests and complaints, the Hive will now be used for Friday prayers to end the issue of overcrowding in the multi-faith rooms.

This is all part of the Hive’s complete renovation which, when fully complete, will give the area a completely new look.

Initial decoration of the space occurred over the Christmas break and new furniture is set to arrive at the beginning of March.

Some are still skeptical about whether the new Hive will be a better space not only for studying, but also for increasing accessibility and usefulness.

QMSU President, Yasir Yeahia, recently spoke to The Print about some of what he considered to be the biggest changes in the Hive: “The right-hand side will feature movable furniture and a relaxed study area to accommodate for Friday prayers, whilst the left side will feature fitted furniture, including booths that can be booked for study, committee meetings or group work.”

The suiting of the space for Friday prayers is, of course, a large theme. Yas mentioned how there have been petitions and demonstrations for the last six years to provide a more suitable and larger space for Friday prayers to take place. This will happen by moving the furniture in the Hive and splitting the right-hand section of the room with a concertina-style partition, similar to that in the Blomeley Rooms of the SU Hub. The organisation of this, along with the moving and replacement of the study furniture, is being organised with the Queen Mary Islamic Society.

Yas says: “The new space for Friday prayers is a huge success for the Student Union, considering around 500 partake in Friday prayers on the Mile End campus.”

The Students’ Union will be delivering communications on the timings of Friday prayers and when they will begin, which should occur in the next few weeks once a plan to safely move furniture and prepare the space has been implemented and agreed upon. For students who are not familiar with Friday prayers running times, Yas said this usually takes place between around 12pm – 2.30pm. The Hive will not be accessible during this time or in the time before. However, it should reopen most Fridays at around 3pm.

Yas addressed concerns students might have about this. He said “There may be some confusion and misunderstanding” about using the space for prayers on Friday rather than allowing students to study there as on other days; “we want to be fully inclusive and fully welcoming to all students… we recognise students come here not just to study”.

The new furniture is due to arrive at the beginning of March, although this may be subject to change. Also to come will be tall tables along the front edge of the right-hand side of the room with plug sockets for students who want to bring and charge their own devices.

There will additionally be fewer fixed computers in the Hive as many were found not to be working or were not used often enough. Students being able to plug in their own laptops in is deemed a more efficient use of space.

In the long-term future, Yas mentioned the possibility of portable laptops located in the Hive which could be ‘borrowed’ for use using a student ID card. However, these are currently just plans.

The funding for the Hive refurbishment came from Queen Mary’s Estate and Strategy Boards, amongst other places. Through some “good fortune”, according to Yas, the Students’ Union were given some money for a redevelopment project. The Hive was seen as being most in need of this money; the space was being used very inefficiently and most students did not wish to spend time there, so they were given permission to use this money for a quick, but overdue renovation.

The final cost of the new-look Hive is unknown. However, a £500,000 fund was approved and the SU are confident that it will remain within budget.

There was consensual agreement to hand over management of the space from the Library to the Students’ Union. In terms of what this will mean for students using the Hive, Yas says that the only noticeable difference would be more advertisements, posters and logo branding, as well as the SU coordinating the booking system of the space.

Overall, he described the project as one of the biggest successes regarding the time it took to be agreed, planned and carried out. The project also demonstrates the Students’ Union’s commitment to increasing available study areas and making campus a more enjoyable place for students to live and work.