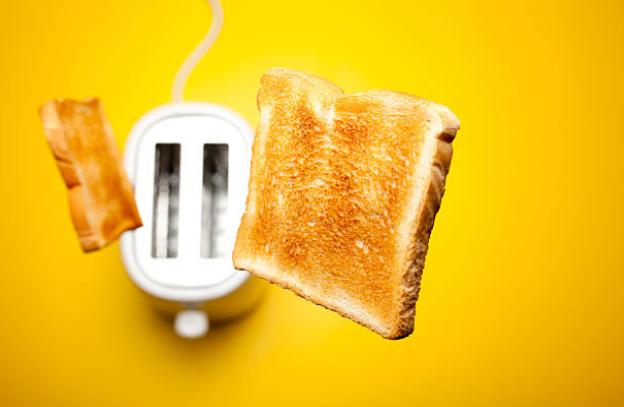 The Virgin Mary in the Grilled Cheese Sandwich: A Betrayal of Evolution

By Will Martineau on 6th January 2018

In 1994, Diana Duyser of Hollywood, Florida, took a single bite from her grilled cheese sandwich. She then placed this said sandwich in a clear-plastic case, carefully protected by cotton balls.

Mrs. Duyser said that during the ten years that this sandwich sat on her nightstand (before Vegas bought it for $28,000) it protected her from harm. Because it wasn’t a sandwich. It was the Virgin Mary. If in doubt, Google about, and you tell me if that there in the Kraft American cheese isn’t a somewhat biblical-looking lady.

This is one of many instances of pareidolia, a psychological phenomenon that finds familiar patterns in random data. Other famous examples include the man on the moon, tea leaves, playing that latest Radiohead song backwards and hearing the Communist Manifesto, or looking up at the sky with a loved one and seeing your future children in the shapes of the clouds. A simple test is to draw a rudimentary face and watch how a couple of thoughtless lines can generate either a sad, angry or happy expression.

The scientific explanation behind our eagerness to elicit meaning from mess goes back, of course, thousands and thousands of years. Once upon a time, humans were the snowflakes of the animal kingdom, and it was essential that, amongst other aces, we harboured the ability to tell another creature’s intention in less than a second’s observation. Not only did this include potential predators and prey but also a fascinating skill at interpreting the contours of wildlife. We are all natural pattern finders.

Although this is still a useful skill when it comes to negotiating pay rises, break ups and hostage crises, our pattern-finding these days tends to be less frequently used than it is abused. From kitchen appliances and architecture to automobiles, designers and advertisers craft their own, rudimentary faces.

Studies have revealed that men are more likely to buy a car if it looks pissed off – a cursory look at any recent BMW model serves as evidence – whilst women supposedly enjoy the comfort of friendlier, less conceited-looking cars. Like a Mini.

This exploitation of gender stereotypes is one of many manipulations of our ancient ability. Perhaps the most worrying is its tendency to lead even the dullest, most rational of people into gambling addictions. What’s your lucky number? Don’t ever play on a Sunday. Wear the sweater nan knitted you if you want to win big. Why? Because it worked a couple times in the past decade. Well, surely more than just a couple.

In 2001 the comprehensive US study, “The Potato Chip [it’s a crisp guys, we call it a crisp] really does look like Elvis!” discovered a disturbing facet of pareidolia. This was the impulse to remain loyal to previous interpretations of the data, even if the data underwent significant, randomised changes.

This fidelity to a previous association – imagine one day you win big at the slot machines right after you bought a White Russian at the casino bar – leads many gamblers to believe that there are omens which, on the surface arbitrary, prophesise a rise or fall in fortune.

This inclination is not to be viewed as a weakness particular to gamblers or only certain groups of people. Such a view is not only discriminatory but also blinds us to our own superstitions. For instance, an unpleasant encounter with someone who adores Elton John may lead us to hate Elton John, despite the bittersweet beauty of Tiny Dancer.

We’re now venturing into the realms of cognitive association, but the study of pareidolia goes a long way to explain why we find these associations in every single corner of life. It explains the science behind a great deal of superstitions, from black cats to feng shui, and arms us with the knowledge to deconstruct these omens when they become a danger to ourselves or others.