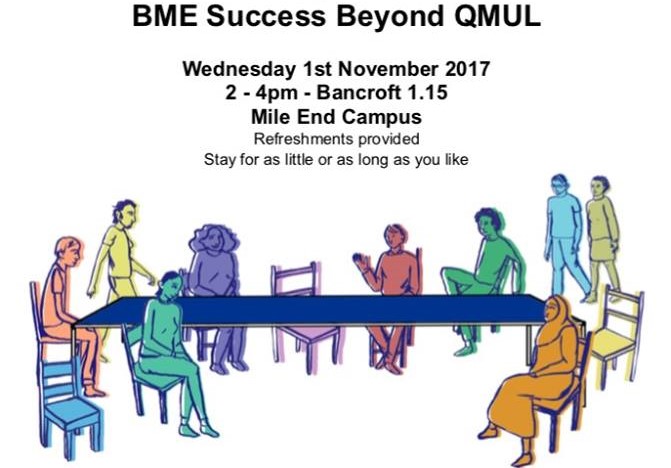 School of Business and Management hosts ‘BME Success Beyond QMUL’

By Elmira Tanatarova on 25th December 2017

SBM takes steps to narrow the gap between students and staff communication by tackling issues of diversity, the attainment gap, and inequalities at QMUL

QMUL’s School of Business and Management (SBM) held a long-table discussion entitled, ‘BME Success Beyond QMUL’. This was a student and staff event chaired by Business and Management students, Yara Lorena Malalane and Sudipta Karmaker. The aim was to tackle discrepancies between the QMUL student experience and opening up a dialogue with the staff.

Amber Swaby and Nadia Yahya Hafedh, of Decolonise QMUL, were at the forefront of organising and facilitating the event; they ensured it would take place in their discussions with staff and SBM students alike. While held predominantly by the SBM, staff and students from the School of Economics and Finance, the School of Engineering and Materials Science and the School of Languages, Linguistics and Film were also present.

The long-table discussion enabled students to come and leave the table freely, but they could only speak as long as they were seated at the table. Additionally, paper on the table allowed students to write comments anonymously.

Yara comments: “I think it’s important to have discussions particularly between different groups (staff and students); it raises awareness for what we all want and how to ﬁx any problems and challenges we are facing. I think that only when we are being inclusive and united can we think about bringing solutions to the wider cohort of students and the university.”

Different issues arose, such as careers management, networking, union involvement and tackling problems, such as the attainment gap of BAME (Black, Asian and Minority Ethnic) students at Queen Mary. These problems were spoken about freely amongst various professors, staff members and students.

All chairs agreed that the event was a success and hope to organise future events to continue the discussions opened up at the long-table.