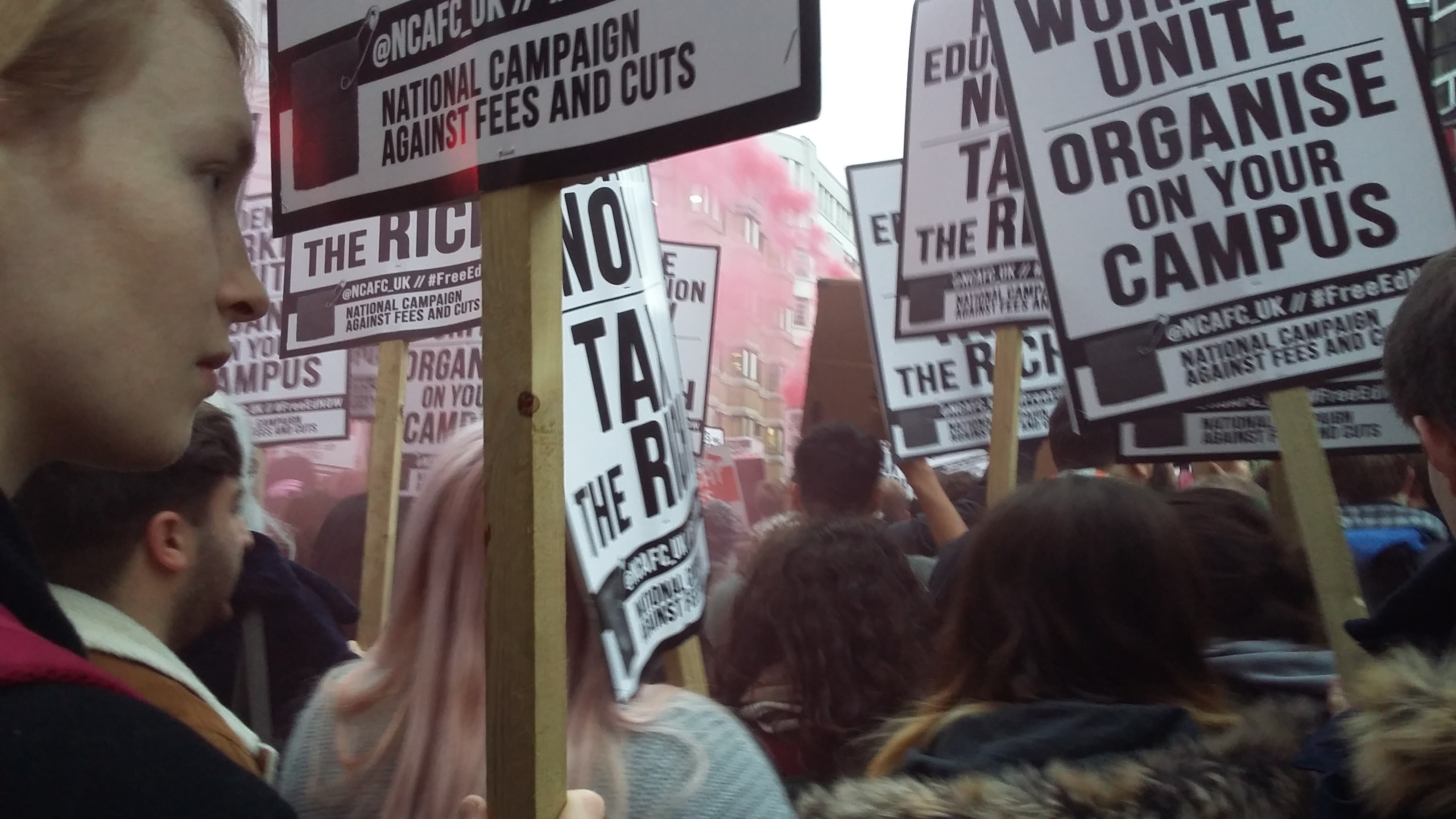 Seven years on from its inception, NCAFC – in partnership with Momentum – brings London the next chapter of activism, in opposition to the marketisation of UK universities.

At the official press conference for the demonstration, it soon became clear that while all speakers drew upon different experiences and perspectives, they were united and in no way ambiguous about their purpose. They campaigned for universal free education and maintenance grants for students across the UK – ‘from the cradle to the grave’.

Whilst tuition fees were the basis of the discussion, panel members did not hesitate to address a wide range of issues faced by both students and university staff. Government actions were attacked from two distinct angles –  from a moral standpoint and on practical, policy-centred grounds.

Panel members Ana Oppenheim and Hasan Patel put forward the idea that much of the establishment discourse regarding higher education is morally reprehensible. The former reminded the audience that education is a right. The latter then talked of how this generation are bearing the brunt of policies of fiscal retrenchment – which are deemed necessary because of the mistakes of past generations. He then rounded off his speech with a more general statement, that we live in a system “run by the few, for the few”.

In regard to specific shortfalls in policy, Momentum representative Rida Vaquas criticised the government for increasing tuition fees, whilst failing to fully investigate or publicise more findings from reports on tax havens such as the Cayman Islands.

UCU representative Rhiannon Lockley then drew upon personal knowledge, recounting an instance where a student was evicted from their flat because of the Bedroom Tax; and how the UK could be at risk of an academic brain drain, with lecturers and professors becoming increasingly overstretched and underpaid as time goes on.

Panelists Hansika Jethani and Rhiannon Lockley made particularly compelling cases on the plights of minority groups in UK universities. Jethani began the discussion by raising issues experienced by international students, such as the lack of financial support, the uncertain and bureaucratic process of applying for visas and the fact that international students are often made to leave the UK upon completion of their degree.

The press conference was, overall, a warning about the decline in numbers of part-time and nursing students, and a pooling of ideas in pursuit of common goals.

The actual demo for Free Education was attended by multiple QM activists and social media. Additionally, it was supported by our VP for Education, Mary Ojo, who saw both the moderate and extreme ends of the London anarchist movements.

After speaking to a few participants, a clear idea of the goal of the protest was waged: although not meant to emulate the extent of the 2010 protest, strong emotions were present, with one participant noting that this was “to keep the demand alive rather than letting it slip off the agenda”. Opinions were wide ranging; however, and it was found that the main tendency was towards the extreme left, with Marxist and Anarchist banners of all types present.

Although this was called a student movement, there was a strong emphasis on the relations between students and the working class. When asked, a member of the Worker’s Liberty Solidarity told us that the barrier between students and workers was becoming increasingly precarious, as so many students are forced into a work-study life.

Some of the slogans which appeared in force during the protest included “liberation not marketisation”, “free education funded by expropriation”, and the usual chants of “no ifs, no buts, no education cuts”. The general atmosphere was one of excitement at the students relating to everyone around them: this, however, led to a feeling of exclusion for those who walked by as casual observers, or those who came to ask questions but found themselves assaulted by the strength of opinion of the participants.