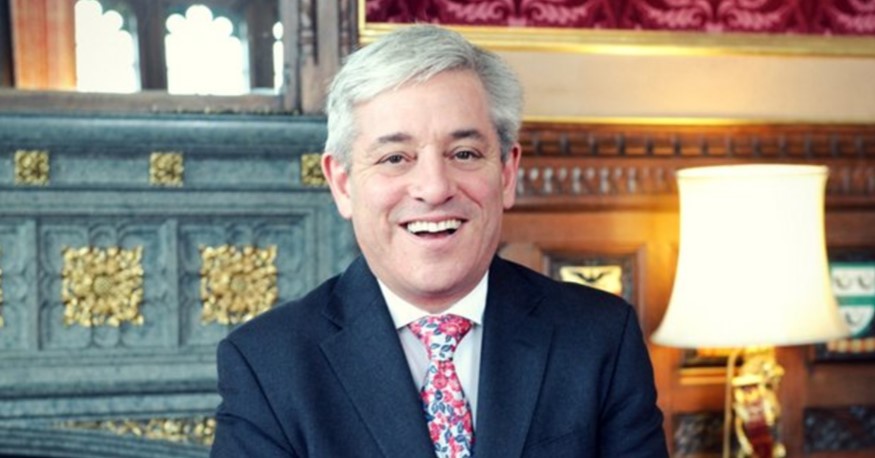 By Gracie Browning on 19th December 2017

Speaker of the Commons, Rt Hon John Bercow MP, visited Queen Mary in November as part of the Mile End Institute’s events. Here’s a rundown of what happened and what the Speaker spoke to Prof. Philip Cowley about

The Speaker and Philip Cowley spoke for approximately an hour and a half, making light humour of political affairs.  The audience were also allowed to pose questions.

To begin, with, the Speaker mentioned that at Queen Mary, we are one of 20 Universities that allow the Parliamentary Internship module for SPIR students (School of Politics and International Relations). He spoke fondly of QMUL, mentioning that “this is a great university, whether you measure it by research excellence, by teaching excellence, or by the gold award it won”. He praised the “tremendous ethnic mix” and the number of international students attending, a sure sign that the efforts of QMUL to transcend the stereotypes of Russell Group Universities is being noticed and praised.

Moving quickly onto Cowley’s last question for Mr Speaker, they spoke about what Bercow thinks is the most important piece of advice that he could give to a young person looking for a career in politics. This was potentially the best piece of advice I have heard yet, beyond the typical ‘get involved with your local party’ rhetoric.

“Do something else before you go into Parliament” said the Speaker, justifying it by saying that it will make you more well-rounded as an MP in the future and will mean you will be more likely to be assigned a constituency to run in.

He also mentioned that if he were to start his career again, he would have specialised earlier. Specialising supposedly makes you more respected as an MP, as you can show passion about one particular subject when it’s most important.

This connects with his answer on what the best speeches have been since he became Speaker. He mentioned Alison McGovern’s “eloquent, passionate and well-informed” speech, pleading for a major enquiry into the historical verdict that the fans were to blame for the Hillsborough disaster. Mr Speaker said that during the speech, “you could hear a pin drop”. It seems that the speeches which are close to the heart of the MP’s making them move the House the most.

Mike Freer’s speech on the right of equal marriage was the other most moving that the Speaker mentioned, which he described as “a very brave, a very personal and a very powerful speech”. This demonstrates that, although Bercow may have held some controversial views and voted against equal marriage rights in the past, his experiences and career truly changed his perspective. He mentioned his membership to the Monday Club in the 1980s (a far-right-wing pressure group on the fringes of the Tory party), describing it as an act of “stupidity, folly and lack of self-awareness”.

The impact Bercow’s Speakership has had on the House was also spoken about. He admitted that he was “naturally quite strong and authoritative” and “abrasive”, but tried to better himself by introducing humour and “teasing” members into being quiet.

They also discussed how he has allowed the length of PMQ’s to increase to allow more questioning of the party leaders and give the back benches greater chance to speak. In response to Andrew Neil’s complaints that it ruins his last ten minutes of his Daily Politics show, Mr Bercow jokingly said that he “couldn’t give a flying flamingo” what he thinks.

A member of the audience asked the Speaker what he has done to discourage sexism in the House since he has been in the post. It is now supposedly an “instinctive sense that I do not want to be calling… six men in a row” and tries to allow more of a balance.

Although not directly his responsibility, he also mentioned that the shooting range in Parliament has been a nursery for the children of MPs. This has made it easier for MPs to find care for their children and there is now also a Committee on Representation and Inclusion.

However, Bercow additionally mentioned that there is a “lot more to do” to achieve equality in the House. It’s good to see that there’s active work being done to support equality in Parliament.

But what is the reform that the Speaker would like to see made in the House?

Top of his list was the creation of a House Business Committee which, although, as he said, “sounds dull and uninspiring”, could be very important. He said that this would meet publicly to decide which matters should be debated without being ultimately controlled by the Whip’s offices. Instead, these matters are currently decided by the government.

What regrets does he have from his career?

Coming back onto the shadow cabinet after resigning over the imposition of a three-line whip to vote against the right for homosexual couples to adopt. This supposedly inspired the Speaker to remain on the back bench and pursue his causes until the position of Speakership came up.

Bercow also mentioned his changing attitudes, meaning he doesn’t idolise the same politicians (Enoch Powell and Margaret Thatcher) as he did when he was younger.

Finally, Philip Cowley asked the Speaker about the idea of Trump being invited to address both Houses in Westminster. He replied that after the imposition of the migrant ban, he was “even more strongly opposed” and that it “struck me as absolutely extraordinary” that rumours ever surfaced that Trump would be invited so early in his premiership. Even Obama didn’t until a few years into his time as President of the United States. According to Bercow, “it is an earned honour” which Trump has not yet achieved.

To summarise, it was an interesting hour and a half watching the Speaker be questioned. It seems he’s genuinely open to admitting mistakes and speaking about how his experiences in British politics changed his views as he progressed.

If you wish to watch the full event, it is available on YouTube.