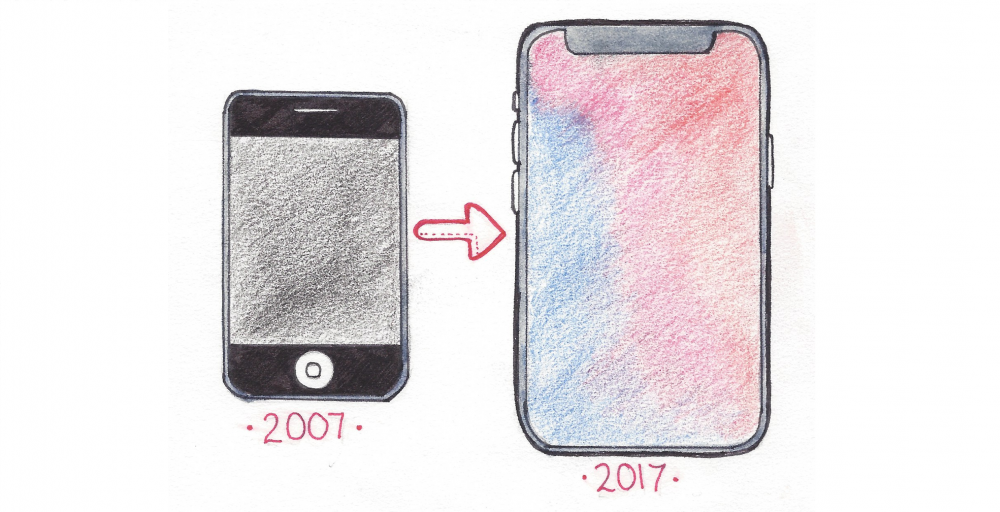 iPhones through the ages

By Alex Richardson on 25th December 2017

How much has changed in the last decade?

This year marks the 10th anniversary of the release of the original iPhone, and in that time the world has changed quite a bit. We’ve had 2 new US presidents, social media has gone from something nerdy to a part of everyday life, and the population of the world has increased by over a billion.

To celebrate the anniversary of the iPhone, Apple has released its most interesting iPhone since the original: the iPhone X; alongside their most boring iPhone yet: the iPhone 8. But just how much has the iPhone, and technology as a whole, changed in the last decade?

The flagship iPhone X has broken the trend again by removing the ‘home’ button from the front of the device, to make room for a 5.8 inch display, almost twice the area of the original, using 18 times as many individual pixels.

You’ll also find a surprise at the top of the screen of the original iPhone – the lack of a selfie camera. The ‘Selfie Craze’ began around 2010, 3 years after the iPhone was released, although the feature was found on other phones at the time. Whereas the rear camera, whilst present, is a far cry from the award winning cameras found on more modern iPhones: with a paltry 2 megapixels and no dedicated flash this camera wasn’t particularly impressive at the time and has only gotten worse with age.

Under the hood there is lots of change as well. The iPhone X touts a processor that is over 40 times as powerful as the original, alongside 3GB of memory; a big jump from the 128MB that shipped in the original. The iPhone X also ships with 64GB of storage as standard, compared to only 4GB a decade ago. You wouldn’t even manage to fit iOS in that much space.

Apple has, however, kept some things the same over the years. Until the major redesign of the iPhone 6, the battery capacity for each generation was very similar, earning the iPhone brand its reputation for terrible battery life.  It was only at this point that Apple seemingly accepted defeat and began increasing the capacity, with the iPhone X touting a battery with almost twice the capacity of the original.

Apple also kept a few of the sensors the same such as the accelerometer and proximity sensors, which were fairly new features to find in a phone at the time, but are now practically ubiquitous.

Connectivity is an area where phones have developed greatly in the last decade. Back in 2007 the original iPhone didn’t support 3G, although it was available in competing handsets, and the 4G standard had yet to be finalised, let alone implemented, and wouldn’t be for another three years. It also didn’t contain a GPS chip, used the second revision of Bluetooth, rather than the 5th by the iPhone X, and didn’t support NFC or wireless charging.

Whilst the hardware of the iPhone has changed a lot over the last decade, there have arguably been even more changes when it comes to software. The original iPhone was released running iPhone OS 1, the operating system that would be eventually renamed to iOS in 2010 with its fourth major release: iOS 4.

iPhone OS 1 would seem very antiquated by today’s standards. Not only is the interface not as sleek and pretty, but there are glaring holes where features that we take for granted should be. There was no support for third-party apps such as Facebook or Twitter, this was introduced alongside the App Store in iPhone OS 2, there was no copy-paste functionality until iPhone OS 3 and many applications, such as ‘mail’ and ‘maps’, were very simplistic even by 2007’s standards.

There have been many changes to iOS over the years such as the replacement of Google Maps with Apple Maps in 2012, which sparked great criticism for providing incorrect directions and generally being worse (at the time) than what it was replacing; the integration of Siri in 2011, after its acquisition by Apple a year prior; and the integration of iCloud backup in the same year.

So the iPhone X is clearly far superior to the original, as is to be expected after ten years of refining the concept, but is it as revolutionary? The original iPhone was a game changer, it shaped modern technology in a way that few devices have done before, but the iPhone X is different.

The iPhone X is, at the end of the day, still just a smartphone; there is nothing as fundamentally different and innovative about it compared to other phones as there was for the original 10 years ago. As much as the iPhone X is better than the original iPhone in practically every way, there is one thing it will never outshine: the iPhone’s legacy.