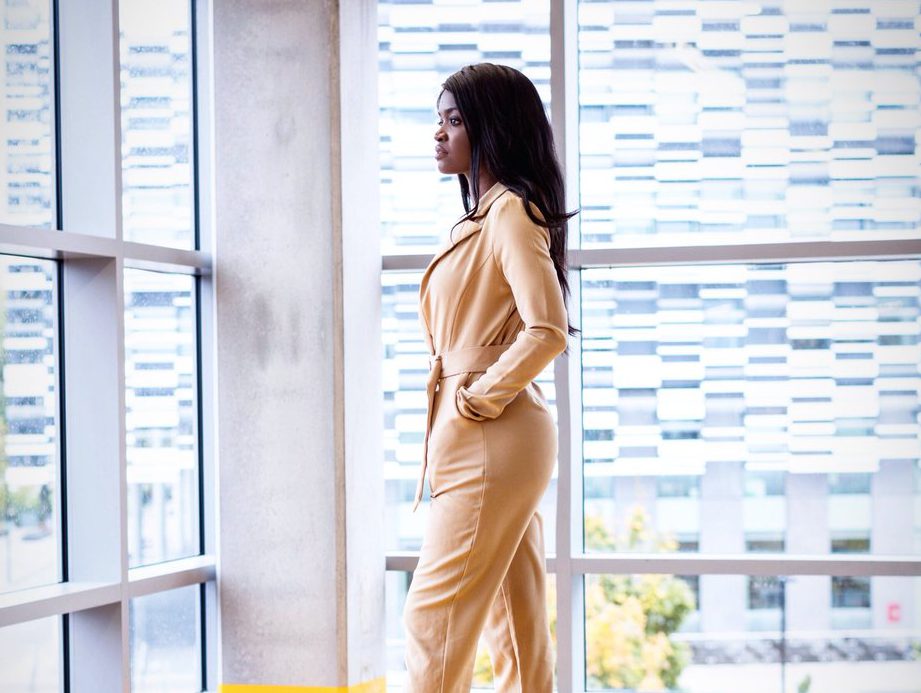 30 Minutes with… Joanna Jarjue, candidate for this year’s The Apprentice

By Charmaine Mandivenga on 11th December 2017

Last week I sat at the top of Bancroft with shaking hands, and I called Joanna to conduct my first interview. If you haven’t been watching this year’s series of the ‘The Apprentice’ then you must be living under rock, or I haven’t cornered you and ‘convinced’ you to watch it…yet. There is a reason for my obsession though, this cycle is proving to not only be entertaining but I have vested interest in one contestant in particular: Joanna.

Even though the digital marketing manager is the youngest contestant, as an alumni of a fellow Russell Group university, she has shown herself to be more than a formidable opponent. She is graceful, poised and isn’t afraid to speak her mind; everything a young woman like myself wants to be!

In our 30 minute conversation, I ask about her background, her journey to ‘The Apprentice’, and if she had any advice for young women looking to go into business after university. As you will see, my interviewing style is more Wendy Williams than Oprah Winfrey (to borrow from one of my favourite professors).

So, you went to Newcastle university, what did you study?
“I studied Politics. But I discovered by the time I was about to finish the degree was, you know at the end of uni you start looking at jobs. I was looking at the civil service etc. and it just wasn’t exciting me. So, I thought to myself maybe I love the topic of politics, discussing politics and learning about politics but not necessarily working in it. I’ve got a massive interest in it though”.

What was your goal then after you decided you didn’t want to go into politics?
“My goal, at that moment in time, was to work in the corporate world. When I actually finished my degree, I started to pay more attention to the business world. I knew that eventually I wanted to set up a business, but I didn’t know necessarily when it would be. I actually thought it wouldn’t actually happen until was about 25/26.

“I wanted to allow myself to go into the working world, understand business, then set my own thing up. When I finished the politics degree, I was actually offered a scholarship to do my masters for free in International Business. But in the September that I would have started, I got offered a really good job”.

That sounds really interesting, what was the biggest lesson you took away from being at university in general?
“The biggest takeaway… I would say individuality is really important. Going to university doesn’t necessary present you as an individual out in the working world, because there are so many people that do come out with 2.1’s and firsts, etc. Anything that you can do to build your own character, know yourself, do extracurricular stuff, I think all of that is always helpful doing into the working world. You should try to build knowledge outside of the course as well as the degree itself”.

That’s amazing! So, who was that you looked up to when you were growing up and setting up your path?
“My biggest influence are the women in my family. There’s always kind of a joke that the women run the show, every single one of us is a strong character. When I look at my goddaughter now (my cousin’s little girl) it’s like, it’s in her blood. So, in terms of who I looked up to, it’s the women in my family. More so because of their confidence, their willingness to speak their mind, stand in their own truth and go for whatever issues may come their way. So I think all the women in my family have been a massive influence”.

I can definitely relate. You must have a lot of support at the moment then, do you watch the show together?
“I always watch the show with my mum even if I know that it’s going to be a bit of a cringy episode. I think it helps as well because I watch the show at the same time as everyone else and when you’re on there it is 16, if not 18 hour days. Everything is filmed. So much happens and there so many decisions to be made so imagine cutting that down into a one hour show.

“Sometimes you’re not sure which bits they’re going to include in the edit, or how things are going to look or be portrayed. Sometimes it’s just as much a surprise to me when I’m watching it. So, I always watch it with my family, I think that really important. So, you don’t take it too seriously or take something too much to heart”.

Do you have any advice for young people looking up to you?
“I think the most important thing is individuality. You don’t necessarily have to know what you want to do. There is such a thing as transferable skills and trying to get other skills to help you with that end goal. Any steps that you take in terms of a stepping stone, any skills that you acquire will always show your work ethic for your next step.

“For me it was things that I actually did outside of uni that helped me. When I was a college, I decided I wanted to learn sign language and I did a night course for one evening a week. Just go out and do extracurricular stuff because even if you don’t decide to set up your own business, any employer that looks at you will look at that as character building. I would say venture out as much as you can”.