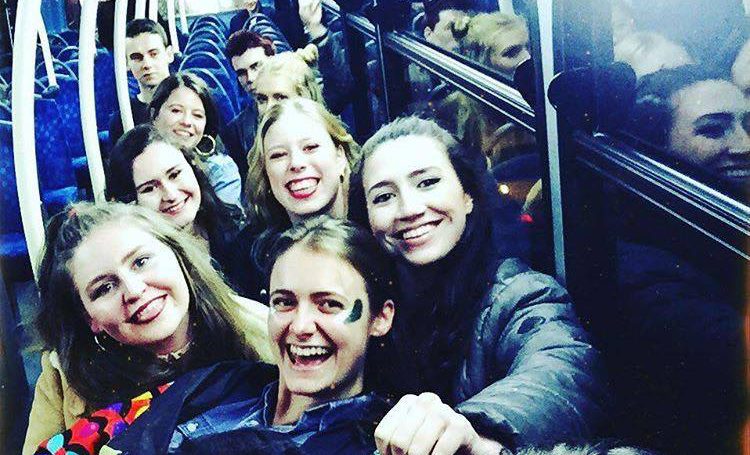 After being regrettably complacent in my first year and joining no societies, me and a friend found ourselves shuffling around sheepishly at the Fresher’s Fair for a second time, trying to find a way to fill our remaining years at QM. Like magpies, we were drawn to the glittering stand and welcoming grins of Josie and Seren, presidents of the disco society.

After signing up to a dozen or so societies and following them on every social media platform, the next week was spent searching for potential ways to spend our weekend. With every post signed off with the glitter emoji and their signature #goodvibesonly, how could we resist the upcoming disco society social at MOTH club for an 80s night?

Pre-drinks were held at the Dundee Arms, one of the many trendy-traditional pubs along Cambridge Heath Road in Bethnal Green. It was a prime location for a relaxed and sociable meet-up before we got our disco shoes on.

The group was small yet eclectic: freshers; second years; friends of friends from all over London; MA students and, of course, the seasoned disco-ers. My fears of being the only non-fresher or established member of the society were instantly dispelled, whilst the chatting and boozing ensued.

After a short bus journey, we arrived at MOTH club in Hackney. It’s what I’d imagine a classic 80s disco hall with that Hackney-edge would be like – and it was wonderful. Carelessly flinging our bags and coats onto the nearest table, QM Disco Society took the stage and got down to some disco classics. Whilst the room filled with a mass of sweating bodies, beaming faces and flowing tunes, the night was danced away in an iridescent blur.

I was eager to find out more after my first social left me hungry for more disco, so I spoke to society President Josie to find out what they are all about…

“We aim to bring positive-minded people together that are up for a good time and bring good vibes only. Essentially, being a member gives you the opportunity to come out on fantastic socials with us as well as supporting our charity nights, so it’s very much give something and get something back. Membership is a gateway into a level of involvement such as DJing at the Disco 4 Change nights. We have talented and passionate members that mix crafted selections of 70s/80s genres for your enjoyment. We hope to see you on the dancefloor with us very soon!”

This relaxed, welcoming and endlessly fun night provided a refreshing contrast the many nights (and money) I have wasted at Piccadilly Institute, Tiger Tiger, The Coronet and the like. If, like I did, you believe you can navigate yourself around the crazy nightlife of London, save yourself the hassle and let Disco Society do it for you. If their first social is anything to go by, the rest of the year is guaranteed to be filled with some truly wonderful events, venues, and people. There are rumours of a roller disco later on this year, another trip to MOTH club (so don’t worry if you missed out on the last one!) and, of course, their ever-popular fundraising nights, Disco 4 Change, hosted at Drapers.

Last year, the society was second of the societies having raised the most money for charity and this year they’re aiming for number one. So why not pop along for good times whilst raising money for charity all on campus? Membership only costs £3 for the entire year, which goes towards helping Josie and the team put on these colourful evenings of fun and, of course, membership to the grooviest society on campus.