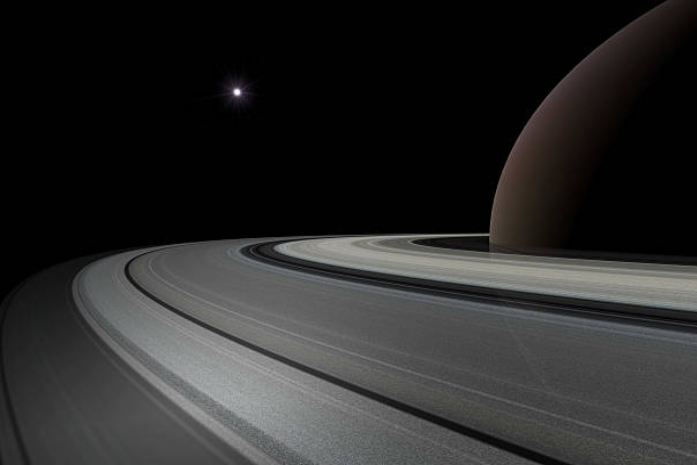 By Alex Richardson on 9th November 2017

Named after Italian astronomer Giovanni Domenico Cassini, the discoverer of Saturn’s rings and several moons, and Dutch astronomer Christiaan Huygens, discoverer of Saturn’s biggest moon, Titan. The Cassini-Huygens mission was composed of two main parts: the Cassini orbiter and the Huygens probe. Cassini’s primary objective was to observe Saturn and its moons, whilst Huygens was to be parachuted through the atmosphere of Titan to take pictures from the surface.

Cassini’s mission started with a small tour of the solar system, visiting the Moon, Venus and Jupiter before finally reaching Saturn. This was primarily to leverage their gravitational pull to slingshot Cassini in the right direction, but it also provided the perfect opportunity to gather some data from those bodies as well. Cassini ended up taking over 26,000 photos during these flybys, uncovering some important discoveries; these include the nature of Jupiter’s atmospheric circulation, possibilities for the origins of Jupiter’s rings, as well as taking the highest resolution full picture of Jupiter to date, allowing features as small as 60km across to be observed. Cassini also performed experiments during its months alone in space, permitting scientists to test Einstein’s general theory of relativity.

This list of achievements is dwarfed, however, by the discoveries made while orbiting Saturn itself. Since entering orbit around the planet in July 2004, observations made by Cassini have resulted in the discovery of six new moons, geological activity and the presence of subsurface oceans on the moon, Enceladus, as well as the presence of polypropylene (a material used in plastics) in the atmosphere of Titan.

Cassini took over 450,000 images and gathered over 600GB of scientific data over the course of its mission; the secrets contained in these will continue to be revealed for years to come. This is ignoring the hundreds of photos taken by the Huygens probe as it fell through the atmosphere of Titan to become the only spacecraft to land on a body in the outer solar system.

Sadly, all things must come to an end and the same was true for the Cassini-Huygens mission. The amount of propellant left in Cassini’s tanks was dwindling, and the radioactive power source was only outputting 75% as much power as it was at launch. To prevent the possibility of Cassini crashing into a moon and contaminating it, the decision was made to plunge Cassini into Saturn itself, allowing for some final data to be collected, whilst also destroying the craft and ensuring the protection of the Saturnian system.

The end of the Cassini-Huygens mission, although saddening, gives way for new missions to explore new unknowns. Between current missions, such as the New Horizons mission, the Juno mission and the Curiosity rover, and upcoming missions including the James Webb Space Telescope, NASA has plenty of projects to be working on. Maybe someday we’ll return to Saturn, but until then, Cassini-Huygens’ work will continue to teach us about the wonders of the universe.