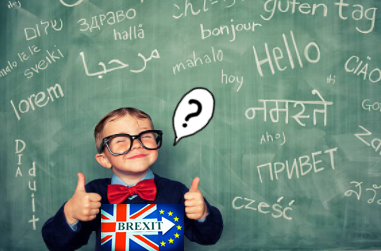 The importance of languages in a post-Brexit Britain

The Print investigates how the vote for Brexit could mean foreign languages are gaining importance rather than losing it.

The stereotype goes that we Brits are terrible at languages. We did three years of French at school but don’t even know how to order a coffee. We’re certain that the worlds of media and business revolve around English. We feel like we simply don’t need to know another language.

This isn’t entirely true, especially these days. However, while many Brits do speak an extra language, with Polish and Punjabi being two of the most spoken, few speak the languages most in demand by UK businesses: French, Spanish and German.

Many people in mainland Europe, including children, see extra languages, particularly English, as a necessity. Meanwhile, in the UK, languages are often viewed as boring, irrelevant and difficult.

However, languages will arguably become even more important to the UK once we leave the EU. The language skills deficit already costs us billions per year at an estimated 3.5% of GDP. Despite the misconception that all business is conducted in English, the reality is that companies need people who speak a range of different languages. In the event that the final Brexit agreement does not include free movement, British businesses may find it difficult to recruit those with language skills as they may not be able to rely on other EU nationals to fill the gap.

Back in May, Jean-Claude Juncker, President of the European Commission, joked that English is losing its importance. Although English will probably not lose its status as a lingua franca any time soon, it could start to play less of a central role within the EU. To do trade with the EU, the UK may need high-level negotiators fluent in languages such as German and French. Currently it does not have many of these. According to the British Council the UK has an urgent strategic need for language skills if it wants to succeed as a world leader in trade and international relations.

From another perspective, languages are even more important post-Brexit on a personal level. Without free movement, it will probably be harder to live and work in Europe. Although there are many English-speaking jobs in certain cities, such as Amsterdam and Berlin, having language skills opens up far more job opportunities.

With this increased chance of securing a job comes the increased chance of obtaining a visa or residency permit, which may be necessary after Brexit. Even if the job is English-speaking, knowing the local language and therefore having some sort of connection with the country would certainly be an advantage on any visa application.

Despite all these benefits, the number of children and young adults in Britain learning languages is continually decreasing. Many universities have made huge cuts to their language departments over the past two decades, with the University of Manchester making cuts as recently as May this year. In British secondary schools less than half of pupils take a language at GCSE level.

There has also been an attempt to increase language learning in primary schools. Today, the majority of primary schools in Britain provide at least some foreign language teaching. The problem here is that teaching is often irregular and not provided by qualified language teachers. There is also the issue of continuation. Because the number of languages offered in schools is often very limited, a child might learn French at primary school and then go to a secondary school where Spanish is the only language on offer.

However, attitudes might be changing. According to data released by languages app Lingvist, Brexit has sparked an increased interest in language learning. Lingvist examined nine months of data before and after Brexit and found that the app’s number of UK users increased by 91% after the Brexit vote. Interestingly, the most popular courses matched the languages most in demand by British businesses: French, Spanish and German.

← Local Music, Global Impact: London to host Oxjam music events across October
How to lose a job in 10 days →