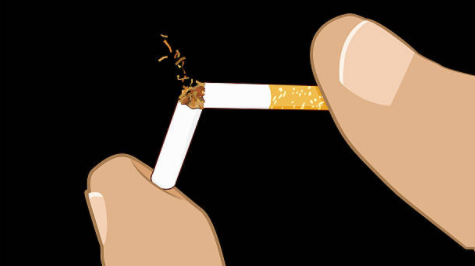 Strolling through our city, stood beneath the lights of our bars and clubs, within the films and songs we stream, there is a war being fought. We have reached the dying days of Big Tobacco, and it is refusing to ride off into the sunset.

Helming the anti-smoking fight, the Department of Health has populated our ad-breaks and billboards with unequivocal attacks on ‘cancer sticks’. The cigarette companies’ retaliation has been a subtler one. Due to the Tobacco Advertising and Promotion Act of 2002, which effectively banned all remaining forms of endorsement by 2005, more covert methods are now essential to sustaining the aura of ‘cool and sexy’ that once so impenetrably enveloped their product.

Positive allusions to a commodity that daily cripples the NHS are to be found in songs ranging from The White Stripes’ ‘Seven Nation Army’ to Frank Ocean’s ‘Forrest Gump’ and Stormzy’s ‘Cigarettes and Cush’. Certainly there are some musicians, albeit lesser known, that aim to deter potential smokers. I am of course referring to Silly Stevie T. and Princess Superstar. Admittedly, the chances of any of these anti-smoking tracks making the charts, or of today’s youth declaring that ‘Yo, Put Out that Butt’ is their jam, are low.

Yet, relying solely on the agency of musicians to promote the once infallible cigarette is not enough. Since the golden age of cinema, of all forms of entertainment it is film that has been Big Tobacco’s most loyal bedfellow. This is not a relationship kept up for the sake of tradition; the U.S.’s Surgeon General’s report of 2012 demonstrated that, “exposure to movie smoking predicted [the] onset of smoking among those who were never smokers”.

Further proof, far harder to deny than any medical review, may be found in the relationship between anti-smoking lobbyists and the Motion Picture Association of America. The MPAA, representing companies such as Disney, Sony and Fox, has consistently failed to uphold its promise to reduce smoking in PG-13 rated features. In 2012, neatly coinciding with the Surgeon General’s damning report, all previous claims that tobacco incidents would be a factor in deciding a film’s rating disappeared from the Association’s website.

There has so far been no research to prove that the placement of tobacco products increases success at the box office. Yet, data compiled by the University of California San Francisco states that 41% of 2016’s cinema releases contained scenes of characters smoking. Star of 2012’s Skyfall, Daniel Craig offers a charmingly candid explanation: “I whore myself out a little bit for that and we get the movie made”.

Although some recent releases have broken from the tobacco-cinema romance, the most memorable example being 2015’s blockbuster Sicario, wherein cigarettes explicitly symbolise the growing anxieties of Emily Blunt’s character, it is far from finished. Recent PG-13 films that either positively or at least ambivalently display characters smoking cigarettes range from Michael Bay’s Transformers: Age of Extinction to the Coen Brother’s Hail, Caesar. Suffice to say there is something to suit everyone’s tastes.

Despite the prolific references to cigarettes in popular music and film, Big Tobacco has not recovered from the days when they could advertise how and where they pleased. Gone are the posters declaring that the man who smokes is “The Man Who Thinks for Himself”, or that smoking is “About as far from the mainstream as you can get”. Grand statements such as these, demonstrated by Viceroy and Redwood respectively, appeal to our timeless desire to live and appear unique. In today’s world, such appeals have retreated back not only to media platforms but to tobacco’s foot soldier: the smoker on the street.

The humble smoker, whether voluntarily or not, is on the frontline of the tobacco war. They are a walking advertisement for the anti-smoking campaign as much as they are for cigarette companies. A smoker can both condone and condemn. The almond-eyed man, his perfect teeth yet to yellow, is a living, breathing endorsement as the lighter throws the darkness from his brow. The toothless junkie searching for fag ends outside your local Spoons is not. Such a sight might even be the straw to break your pack of Camel’s back.

Yet, whatever the appearance of the consumer, the cigarette pack in the smoker’s hand does its manufacturer proud. The subtle yet unmistakable variances in the design of different brands’ aids many young people in their struggle to form an identity. The simplistic, red and white block colouring of his latest 20 pack proves him a manly, Marlboro man, whilst the heraldic ensign atop her box of Silk Cut suggests she’s a sophisticated kind of girl.

Today, such labels have become obsolete. On 21st May 2017, branded cigarette packing ceased to be sold in the UK. From Benson & Hedges to Golden Virginia, all tobacco products now wear an olive green uniform somewhat evocative of a school skirt or tie. The new legislation, decided the previous year, has prompted both celebration and skepticism.

Whilst anti-smoking institutions and lobbyists have welcomed the government’s decision, its previous efforts, such as the 2006 Health Act, which banned smoking within indoor public areas, have had little impact. Whilst the prevalence of smokers has been steadily declined for decades, the Act did not increase the painstakingly slow pace of the downtrend but merely forced a great many venues to close their doors.

Some have even argued that since the ban, ‘having a fag’ has become an excuse to leave the noise and dark of the club and bar, thereby enhancing its reputation as a conversation starter. Asking for a lighter is (arguably) the holy grail of ice-breakers and chat up lines.

Yet there is evidence to suggest that this latest endeavour to extinguish our country’s vestigial cravings will have better success. In December 2012, the Australian government standardised all tobacco packaging. Its reward for being the first nation to colonise a plethora of once striking and diverse designs was granted in the 2014-15 Bureau of Statistics report: within the 18-24 age group, the most vulnerable to tobacco’s aesthetic appeal, only 14% were regular smokers.

However, cultural and socio-political differences between our nations must be accounted for. Australia’s achievements have yet to douse many critics’ fears that when there is no visual distinction between brands, consumers in the UK will simply buy the least expensive pack. A ‘whatever’s cheapest’ attitude could spark up a price war between brands that will lead to ever more affordable cigarettes and in turn a higher prevalence of smokers amongst lower earners.

In response, the 2017 Finance Bill introduced a new minimum excise tax in order to combat tobacco’s falling price. Whether this will dissuade lower earners from starting to smoke, or bleed dry the wallets of those already addicted, remains to be seen.

Further worries arise from a psychological perspective: nobody likes being told what to do. Certainly not a millennial generation which more than ever finds agency in distrusting the establishment. Any armchair psychologist knows that taboo is the key to desire. Despite the reduction of young smokers in Australia, it may be that the closer we come to forbidding the sale of cigarettes in the UK, the greater the allure they will hold for this generation and the next. Perhaps even the bile-inducing images that accompany the now plain packaging (memorable examples include a laryngectomy’s aftermath and its unnerving resemblance to an anus) will simply accentuate a timeless impulse to rebel against sense and sensibility.

Due to their comparatively healthy and attractive appearances, young smokers are the choicest variety of free advertising. If the new legislation inspires those adolescents who are disillusioned with their government to smoke, then they in turn will encourage both younger and older age groups. “A young adult franchise is key to brand development” was the salient statement of a 1999 Philip Morris Report. Yet Philip Morris International, which owns brands such as Marlboro and L&M and peddled 850 billion cigarettes in 2015, offers anti-smoking campaigners a gleam of hope.

In response to the ban on branding in Australia, the world’s largest tobacco giant publicised a puling statement: “Standardized packaging’ is a euphemism for government-mandated destruction of property”. Despite its efforts to legally defend a product that slowly slaughters both its users and those around them, the legislation was passed and remains unmolested. Such futile outrage is the closest proof that debranding is an effectual form of attacking Big Tobacco.

That outrage is now, gradually, fading into resignation. Ultimately, the multi-billion dollar company knows the smoker better than any government-led initiative, and it’s beginning to lose faith in them. The homepage of Philip Morris International’s website declares in large, white letters: ‘Designing a Smoke-Free Future’. Big Tobacco’s efforts to alter its image doesn’t mean it intends to dissuade those inspired to smoke by films, music and the smoulder that will forever surround What You Should Not Do. But it’s time to look for glamour in greener pastures. It’s time to buy Tom Hardy a vapouriser.