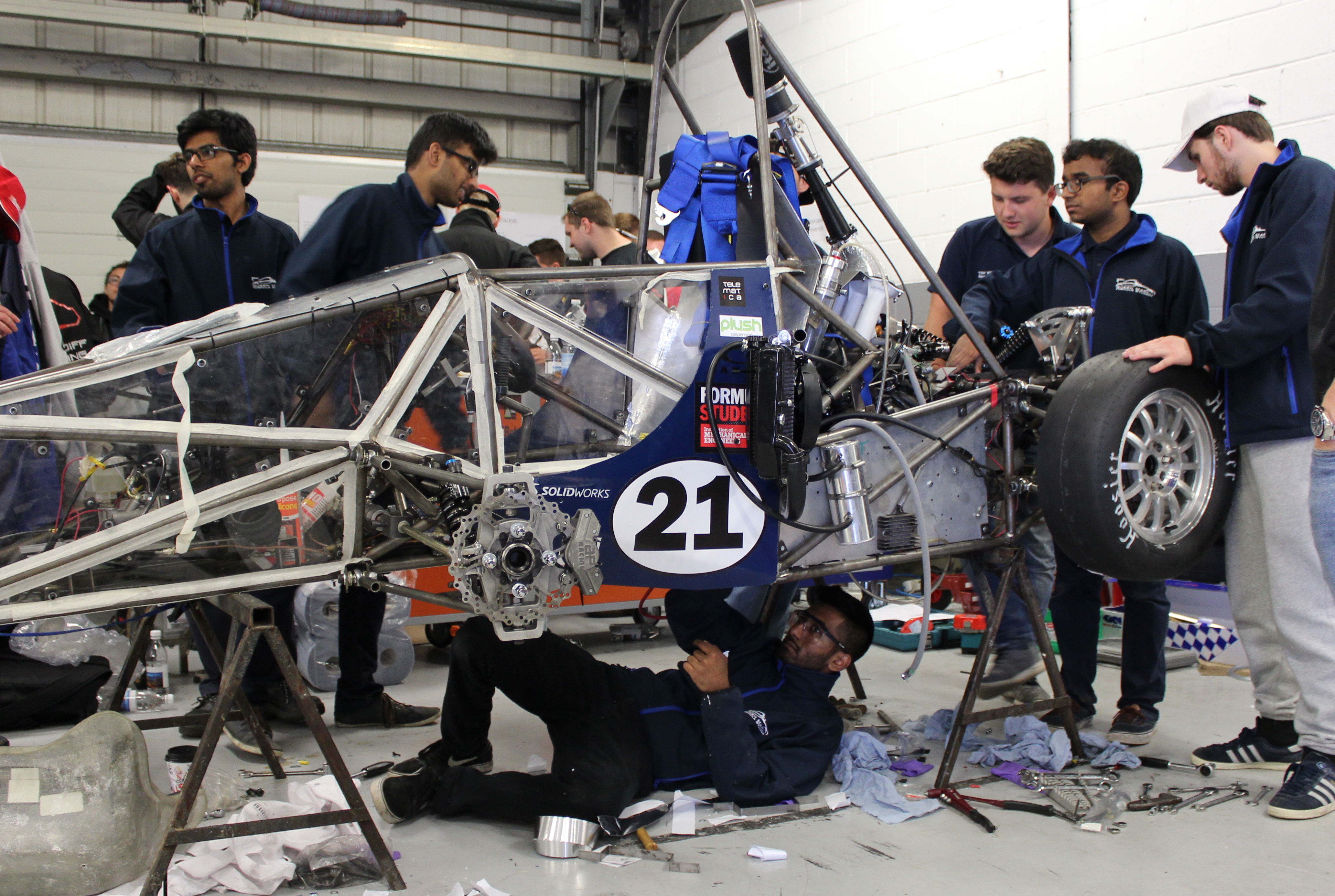 After struggling for over a decade, Queen Mary Formula Student (QMFS) celebrates making history – which has indeed happened on several occasions over the course of last year: Attending IMechE’s ‘Learn To Win’ event, first engine start, nominated for Society of the Year, gaining Silver Societies Excellence status from the Students’ Union, delivering the first Formula Student car in university history, competing in Formula Student UK at Silverstone, and our biggest achievement yet, winning the Best Newcomers Award at said competition… It has been an exciting year for QMFS!

In September last year, after the team structure had been reorganised, a lot of new people were recruited – especially during Freshers’ week, so keep an eye out for us this year – which brought energy, enthusiasm and new ideas to the team.

Aqil Hussain, Project Manager of last year, said that he wanted to make Formula Student a university wide project, and not just something for Engineering students. Therefore, students from various study subjects were brought onto the team, ranging from Computer Science, to Business and Management, to Physics, to Anglo-German Cultural Relations, and even to Film Studies and Drama.

This strategy turned out to be a success: After having attended the IMechE ‘Learn To Win’ event in October 2016, where we had the opportunity to discuss ideas with some of the key members of the Formula Student competition, the team managed to get an engine started in November. This was a milestone achieved, but the team still had to overcome a lot of obstacles in order to make it to Silverstone in July 2017.

Due to refurbishments going on in the Engineering Building, QMFS had to relocate several times, which made it difficult to keep working on the car. Furthermore, it was a financial challenge to find sponsors who would invest in a rookie team with no successful history whatsoever. In the end, however, thanks to our committed team members, who put a lot of time and effort into the project, we could realise the dream of building Queen Mary’s first Formula Student car just in time for the Formula Student UK competition in July.

Taking part in the competition at the Formula 1 circuit in Silverstone was amazing, since for most team members it was the first time seeing a Formula 1 circuit up close, and competing on one just made it even better. To see the other 74 teams with their cars, some of which came a long way, for example from Iceland or Pakistan, and experiencing the friendly support between the teams with people helping each other out, was an invaluable experience. Not to mention meeting people from the industry like Willem Toet, former Head of Aerodynamics of the Sauber Formula 1 team.

After a year of hard work and countless hours spent in the university labs, the team’s efforts were rewarded by winning the Best Newcomer Award 2017.

The team aims to use the momentum gained from the success of this year in order to return to Silverstone with an even stronger entry in the upcoming year. If you are passionate about cars and racing and are willing to dedicate time to learning things that you will never learn in a classroom, come and find us at Freshers’ fair. We will be recruiting again this year and are more than happy to give you more information about what we do.

If you are not doing an engineering based degree and are worried about joining our society, we can assure you, we have several roles available that do not require any prior engineering knowledge. Skills from a variety of degree backgrounds are needed particularly in operational roles such as in Finance, Administration and Marketing (I can say this from personal experience since I am a Film and Drama student).

To get in touch simply drop us an email at qmformulastudent@gmail.com.

Published in Curated and Sport