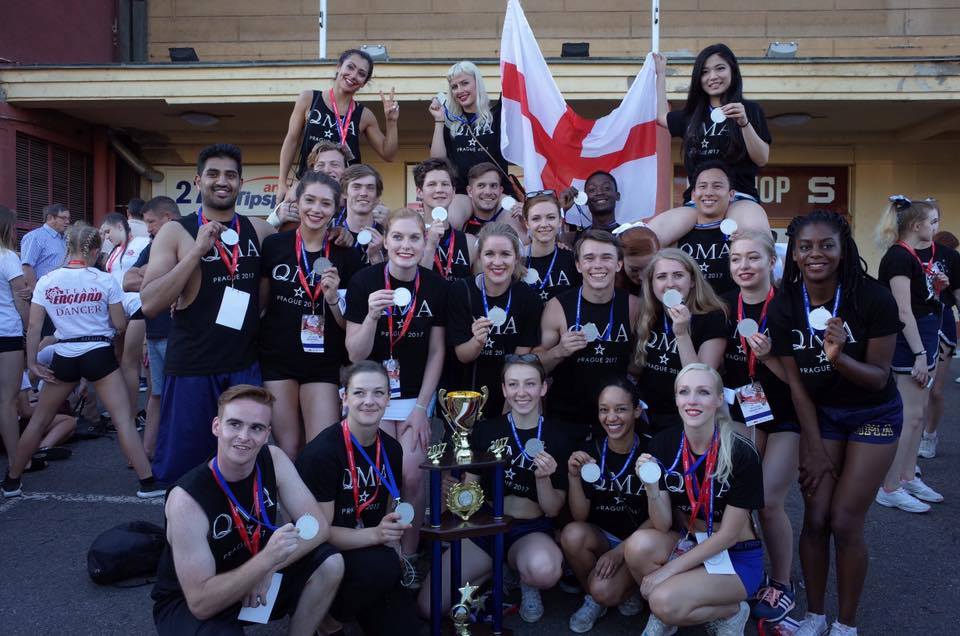 The Print tracks the outstanding progress of the QMUL Cheerleading Society in their endeavour to win the European Cheerleading Championships.

On Thursday 22nd of June, QMUL’s cheerleading club headed to Prague to compete in the European Cheerleading Championships. After being awarded a bid to represent England in May, the previously level 4 team, ‘Reign’, trained intensely for a month to achieve the new level 5 skills needed. With the team made up of both current students and alumni, finding opportunities to train as a whole team was a challenge. But they managed to find time in the weeks before the competition to learn the new skills.

Despite many inconveniences, including storms and delayed flights which almost prevented two members from making the competition, at 1pm on Saturday 25th June they performed a near perfect routine at the European Cheerleading Championships.

The performance opened with a thirty second cheer which amped up the crowd who clapped and shouted along. This was followed by a two minute routine full of tumbling (gymnastics) and stunting (groups working together to hold a flyer in the air). The tumbles were all executed perfectly and cleanly, with star tumbler Warren Holmes causing a roar from the crowd after his flawless tumble pass. A smooth transition to the stunt sections saw beautiful shapes and twists from the flyers in the air. The routine finished with a unique pyramid (group stunts working together) consisting of three groups of handstands that had the crowd in an uproar of praise. The routine was marked by a panel of judges, who look for attributes such as execution of skills, athlete performance, and cleanliness of formations.

Having gone to the competition with the intention of having fun and doing their best, the team were faced with an amazing surprise when the announcer called out QMA in the top three. They ultimately won second place, a truly unprecedented achievement.

President of the society, Christopher Moore, talks about the experience: “Winning the bid to compete at the European championships was a complete shock to all of us on the team, and though we knew it would be hard work to train and level up from the competition, we knew it would be absolutely worth it. Making the various adaptations to the routine, learning harder skills, working on a new surface, and competing at an entirely new level would have been impossible if it wasn’t for the work of the whole team, pulling together, encouraging each other, and powering through some of the hardest training we’ve ever had. Walking out into the arena to represent England was an awesome feeling, and even though it was totally nerve-wracking, the faith that we had in each other, and in our coach, Clare, allowed us to put out a brilliant routine and do ourselves proud. Coming home with 2nd place from the competition was a genuine surprise, and a testament to how far you can go as a team when you all work together, to push past your limits, and achieve new skills”.

A huge congratulations to QM Angels for their outstanding achievement while representing not only Queen Mary University, but also England.

Published in Curated, Lifestyle and Sport