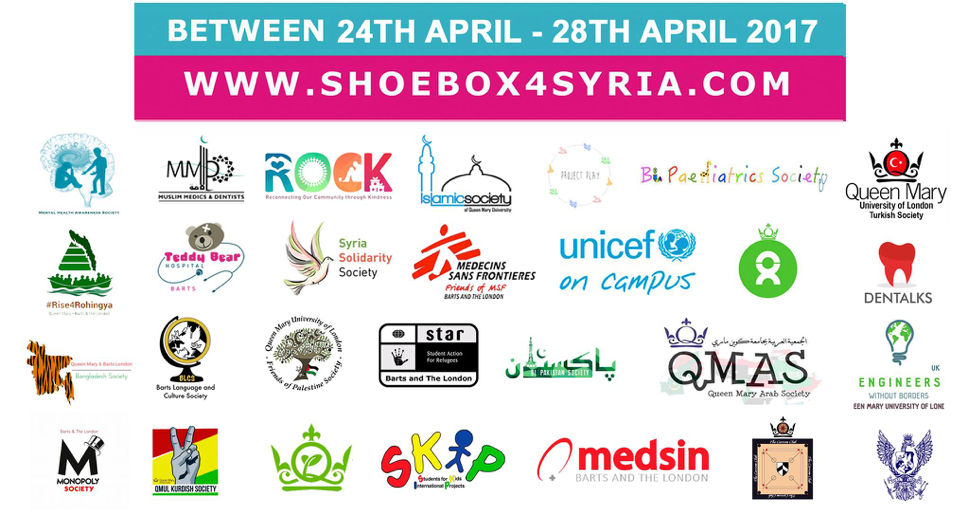 An initiative as unique as #Shoebox4Syria has never hit the Queen Mary campus with such a magnitude before. With more than 30 societies on board from both Queen Mary and Barts Campus, all with the same hope of making this year’s campaign bigger and better, this display of unity and solidarity is truly heartwarming.

The “ShoeBox4Syria” campaign was first launched in 2014 with the aim of sending shoeboxes filled with gifts to children living across Syria in time for Eid-ul-fitr, a religious celebration observed by Muslims after the month of Ramadan. This is with the sole intention of bringing a smile to a child’s face in times of unimaginable hardship.

Since this campaign was adopted at Barts in 2015, the society has seen a generous growth in the number of shoeboxes collected, with 40 boxes being collected in 2015 and approximately 60 boxes in 2016. With more than 30 societies on board, this year can only be bigger and better.

The President of the Queen Mary Barts and The London Syria Solidarity Society, Salik emphasised the importance of such campaigns: “As the Syrian Crisis enters into its 6th year, the casualties of the conflict have disproportionately been innocent children. More children were killed in 2016 than in any other year of the conflict. At least 652 children died this year with nearly half of them dying in or near a school. Our involvement in the ShoeBox4Syria campaign will encourage psychological recovery and healthy development in children affected by the Syrian Crisis”.

Individuals from several student societies, and local communities have been volunteering their time this term to box and wrap up gifts for Syrian children, and the results have been beautiful and inspiring.

Although the crisis in Syria has destroyed thousands of children’s homes and disrupted their once peaceful abodes, there are strides which can be taken to ameliorate their situation. This project is one of the ways in which you can do so. You can join QMBL Syria Solidarity Society and BL Muslim Medics and Dentists, along with hundreds of students in making this year’s campaign a huge success.

How can you help?

Create Your Ideal Shoebox Gift And Make A Child Smile

Here are the five simple steps:
1) Get a shoebox
2) Choose the age-range and gender of the child
3) Wrap the lid and box separately
4) Fill the shoebox with age and gender appropriate gifts
5) Drop it off to the BLSA or QMSU receptions by Tuesday 2nd May, 12pm

Donate Money
If you’d like to donate money towards this project, please get in touch with Barts MMD

Should you have any further questions about the initiative, feel free to get in touch with us via the events page or via email on bartsMMD@gmail.com