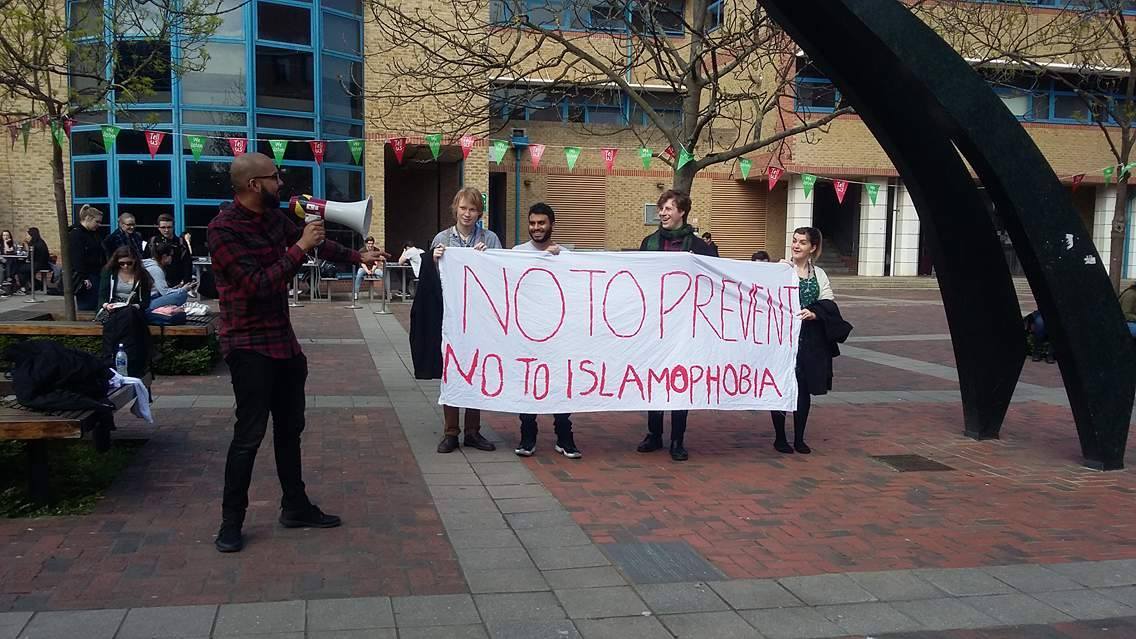 Since their official campaign launch on the 18 January of this year, Queen Mary Against Prevent has been a movement with a clear aim. In a speech launching QMAP, a speaker stated: “This is a campaign that is done by Queen Mary Labour Society in collaboration with members of the Kurdish Society, Islamic Society and UCU. Our aims are to get the government to stop Prevent, to stop the university management having watch lists and to challenge the methods in which they monitor students. The main aim is to reduce the amount of information building up on students, through Prevent, to none at all.”

Following their first demo held in February, QMAP held another one on the 28 March in which they gathered to chant and rally again, instilling the message of their campaign. Adam Ansari, a member of the campaign and speaker at the demo, sees the importance of such a movement to the university: “Prevent has caused significant concern among people, especially Muslims, in terms of expressing their views. This type of policy is toxic in a university environment where there should be new ideas. Britain should be a society of social equality and fairness, but Prevent conflicts this.” Ahmed Mahbub, the newly elected VP Welfare was also present as speaker, as was Miranda Black, SU president 2016-2017.

Prevent is a policy led by the British government as part of its Contest Counter Terrorism scheme, set up in 2011. However, when asked on campus, many students didn’t know it was even in place, and upon hearing of it, had mixed views.

Zoe, a second year, stated “In theory, if you have nothing to hide, it shouldn’t be a problem. However, I was never asked for consent for my data to be searched. And I also do see how it’s a problematic policy in terms of racial profiling. There should be a more equality-based alternative.”

“At the same time, I heard that it was a helpful tool during the Westminster attacks.” Stephanie, a second year French student comments. Stephanie adds that she thinks the policy is a blatant form of isolating the Muslim community, calling it “unfair.”

Rachel, another second year, says “It’s bad that they’ve isolated the Muslim community, but I also think strategies against terrorism are very important in this time, and the government should alter the strategy so it can actually prevent terrorism.”

George Craddock, another QMAP member elaborates on the importance of solidarity against Prevent and says that not only those affected should join the movement: “Queen Mary Against Prevent is a grassroots movement with the aim of protecting students from a strategy that attempts to impeach their freedom of thought. Prevent is a policy that creates mistrust with our Muslim student body, as well as fear in self-expressing oneself. For this reason, we at QMAP have launched a campaign to strengthen a coalition of students and staff dedicated to fight Prevent in true solidarity.”