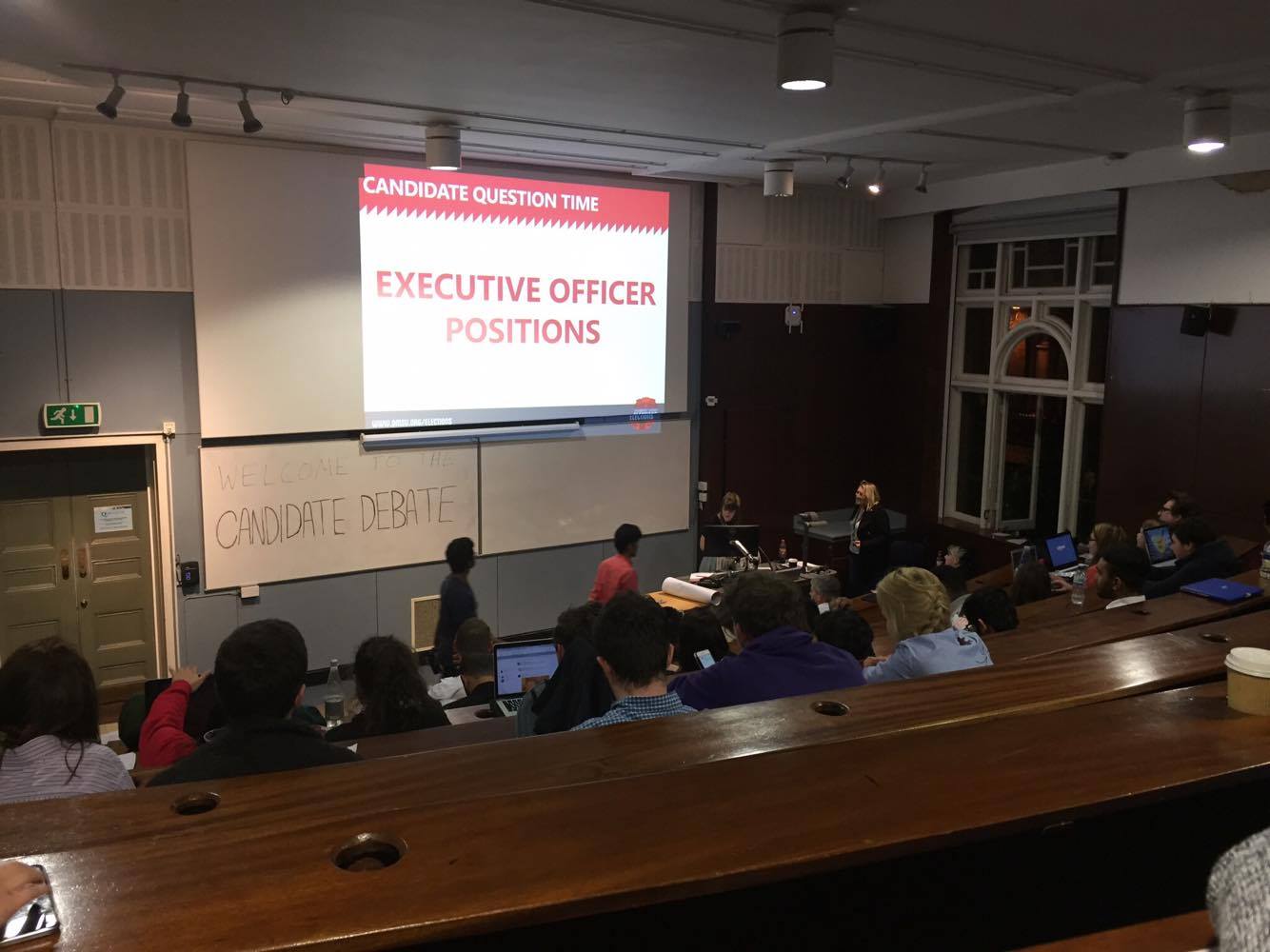 Students gathered in the Milton Lecture Theatre in the Garrod Building to hear from candidates running for the part-time Barts and the London (BL) and cross-campus positions, as well as the full-time executive officer positions.

Candidates were given the chance to make a one minute speech and answer questions from the audience, whilst those running for executive officer positions could also ask questions of each other. The evening was chaired by QMSU President Miranda Black, who tried to raise the energy in the room with a Mexican wave. 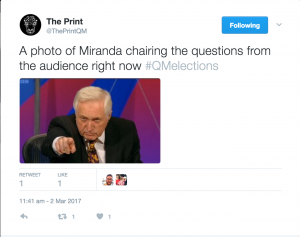 The hustings was live tweeted by The Print and also live streamed on the QMSU Facebook page for the first time.

The evening kicked off with the candidates for NUS delegates. Last month, a referendum was held over whether QMSU should remain affiliated with the NUS following a successful student-led petition which garnered over 250 signatures. The result saw an overwhelming majority for the Yes campaign, and there were four candidates present at the first hustings in a bid to become one of the delegates.

Harjeevan Gill and Sylvia Vanezza Ceballos Serrano came on behalf of the Rage Against Racism slate, a division which “aims to tackle racism, austerity and war”. Monty Shield, a candidate also in the running for VP for Education, self identified as a socialist feminist and pledges “to continue to campaign against Prevent and attacks against university education”. Dan Mercer, who campaigned for the No vote during the referendum, said we should “accept the democratic result of the QMSU and now work together to reform the NUS into a more representative union that students can be proud of and engage with”.

Candidates for other cross campus positions also made their case, including Anis and Sara for Student Council Chair and Rhiannon for Sustainability officer, a new position created this year to address environment and sustainability issues. 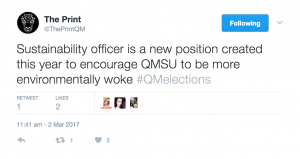 Many candidates did not turn up, as many medicine and dentistry students have placements outside of London. However some gave a statement to be read out by QMSU Deputy Chief Executive Officer Dani Beckett. Also noticeable that evening was how many candidates were running unopposed, with 14 out of 21 part-time BL officer positions having only one candidate running, raising questions about student apathy and engagement with the SU.

Despite this, the audience, the majority of whom were BL students, had many questions pertaining to students’ welfare, timetabling and social activities within the Union, as well as calling on Mile End based candidates to make their responses more Barts specific. Many candidates were also asked about their existing experience within the Union. 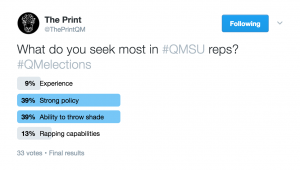 Things got particularly lively and feisty when it came to sabbatical officer positions. Candidate for Vice President Barts and the London Rakin Choudhury delivered a rap instead of a speech, but audience members wanted to know whether he had substance as well as style, asking questions about improving the Griff Inn, BL student media and how he would manage potential QM/BL tensions.

When it came to the Vice President Education position. candidate Alhsasan Eshawesh claimed he was the a candidate who could ‘speak and make the change, unlike the others’. One of his opponents Mary Ojo hit back and stated she found this hard to believe based on his manifesto, whilst also criticising fellow candidate Monty Shield’s approach to fighting the Prevent strategy. ‘Protests with only 25 people attending isn’t making students aware’. However, Monty argued that small grassroots protests build the momentum for further campaigning. 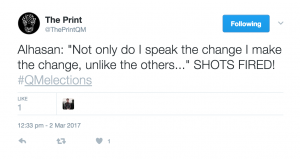 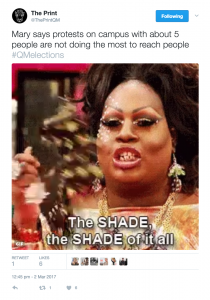 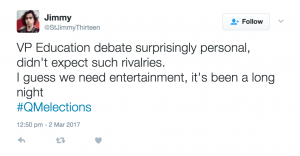 Candidates for president Ana, Giulia, Adam and Yas spoke about their policies and what they could do for BL. Whilst Adam spoke about more autonomy and Advice and Counselling services at Whitechapel, Giulia suggested holding drop in clinics and encouraging corresponding officers to work together. Yas admitted that his knowledge of BL was his weakness but that he would work closely with the BLSA president whilst Ana suggested holding more joint events. Audience members asked questions about engaging students not involved with the SU, sustainability and their individual weaknesses. 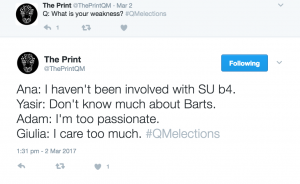 When it came to questioning each other, Giulia asked her three opponents who they would vote for if they were not running. To which Yas responded with ‘I would vote R.O.N (Re-Open Nominations)’. 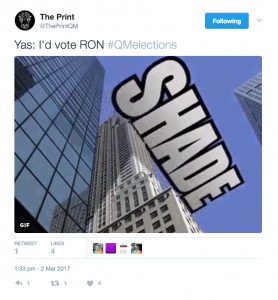 Voting is now open and will close on Thursday 9th March at 4pm, with results due to be announced in Drapers later that evening.