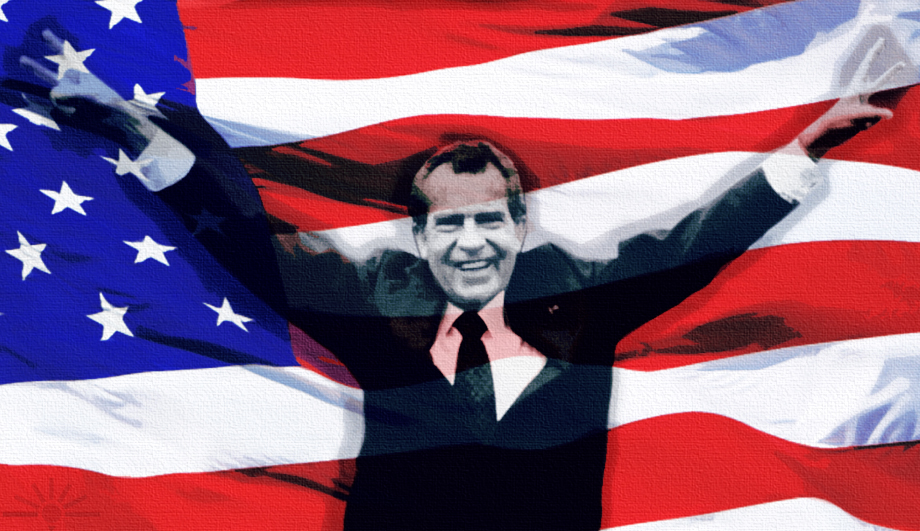 Nixon on Trump – “Give the Press a Break”

It was a Monday evening. I had just finished my new nightly routine: watching the News at Ten, followed by two hours of breathing into a paper bag desperately trying to find some joy in the world.

I got ready for bed and prepared myself for the usual night terror, in which I become trapped in Donald Trump’s comb over, engulfed in a blonde wave of fury. I was just about to close my eyes when I heard eerie moans coming from the distance.

At first I just thought my flatmate had got lucky at Monday’s Calling, but I could not have been more wrong. Suddenly, the ghost of Richard Nixon appeared before me. The disgraced US President, whose paranoia led to one of the greatest scandals in American history, had been transported from the spiritual realm and chose Mile End as the place to manifest.

Bit of an odd choice, I remarked. But Nixon assured me there was a reason for his visitation. He was keen to deliver a message and he was adamant it must be published in The Print. I was as shocked as you are.

What follows is the actual genuine interview I had with the real actual Richard Nixon.

Why are you here?

I had to return to the mortal realm because of what is happening to my country. Donald Trump as President?! There I am, trying to have a friendly game of golf with the Kennedy brothers but we can’t concentrate on our swing when we see the state of American politics today. It’s all corruption, unethical deals and ridiculous outbursts. It’s a sad, sad sight.

Seriously? You, Richard Nixon, are having a go at Trump?

Well it’s a bit like the pot calling the kettle black, isn’t it? Actually, it’s more like a kettle calling another kettle a kettle.

Okay, maybe I had one or two controversial moments in my presidency. Maybe I came off a little mad, but we all go a little mad sometimes. I’ll admit, I was guilty… wait, no, not of that thing… shut up! I meant to say, I occasionally attacked the Press, that is true, but this is just getting ridiculous. Donald, please, give the Press a break. It’s time to get your act together and end this charade.

*Nixon receives his latest polling figures via an ethereal telegram*

Look, you can’t print this. Trump’s goofs are putting my popularity numbers through the roof. People like me, don’t you see? They really, really like me… in comparison.

I tried to reason with him, but he wouldn’t have it. By now it was morning and I had to get ready for a lecture. I asked if he could at least make me some breakfast but he just said:

People have got to know whether or not their president is a cook. Well, I’m not a cook.

And then, he was gone. I feared no one would ever believe my story but thankfully Nixon was taping the entire conversation. The ghosts of Woodward and Bernstein managed to pass them on to me, thus blessing you, dear reader of The Print, in sharing my revelation.