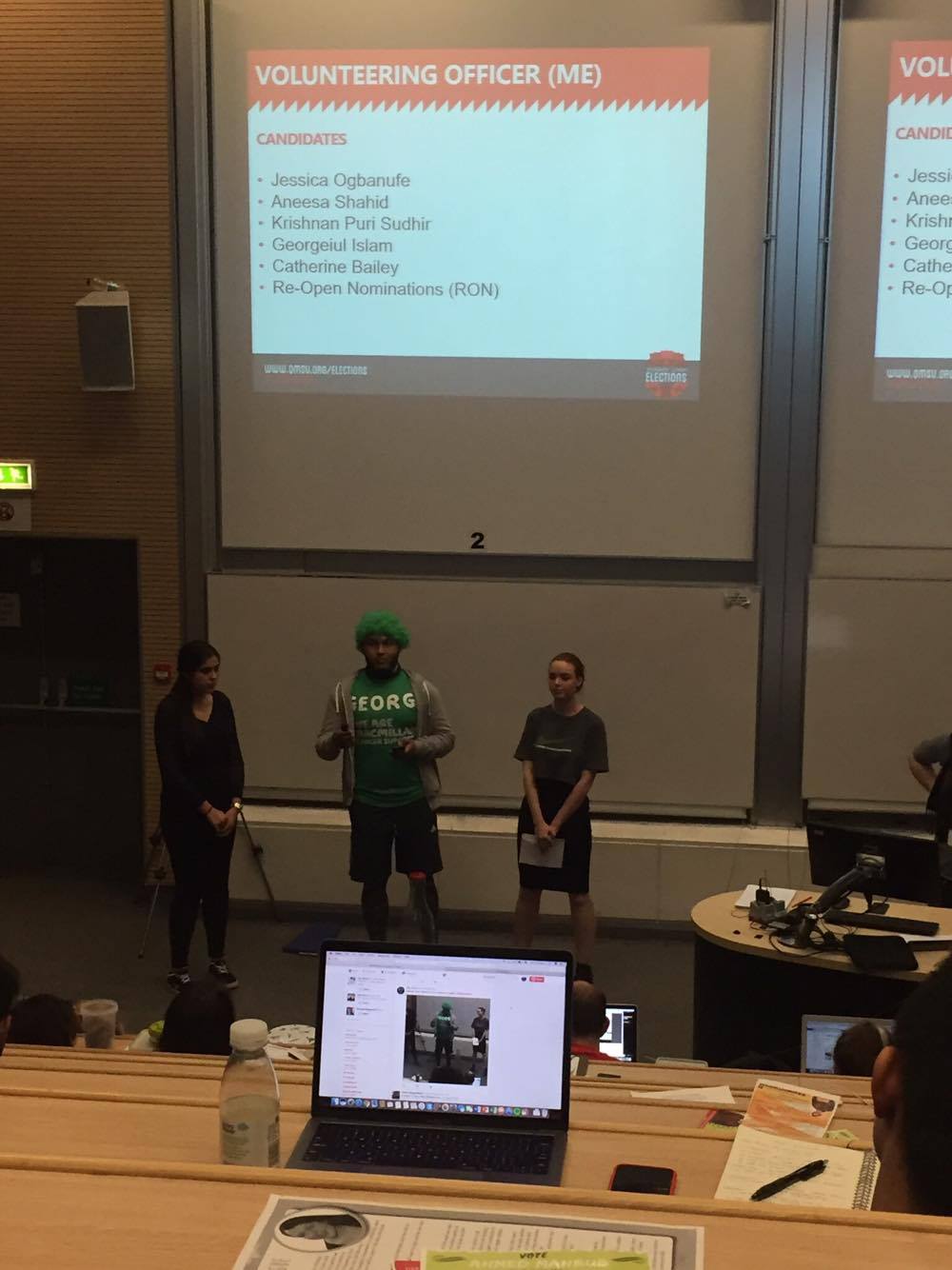 As voting opened on Monday, the Mile End Candidates Question Time provided an opportunity for students to grill candidates hoping to represent them at Queen Mary Students’ Union (QMSU) next year

The second round of hustings took place in the Mason Lecture Theatre in the Bancroft building, with candidates for NUS Delegates, Mile End part-time positions, cross-campus and executive positions making their case to be elected.

Robbie Young, Vice President Society and Citizenship at the National Union of Students (NUS), was back by popular demand to chair for the evening after hosting last year’s Whitechapel hustings, reading out ‘fun facts’ dropped on the QM elections hashtag on Twitter throughout the evening.

Hustings Fun Fact: the oceans will be dead by 2048 #QMelections

Before the evening kicked off, candidates were reminded about accessibility and not to place their campaign banners inconveniently. As with the Whitechapel question time, the evening was live streamed on the QMSU Facebook page.

The NUS delegate candidates were up first. With 4 positions available, 9 candidates delivered speeches where mentions of Trump, Brexit and democratic reform of the NUS was made. Questions from the audience included what the the biggest issue facing students nationally is and whether the NUS was truly representative.

As no questions are allowed for student trustee candidates, the chair moved swiftly on to the Mile End part-time positions, starting with the Disabled Students’ representatives. Katherine Toomey and current rep Matilda Marcillo are standing on a joint ticket and spoke about getting resources for Disabled students, including swipe card access for lifts so only those who need them can use them. Statements were read out by the Deputy Chief Executive Officer for candidates for Humanities and Social Sciences (HSS) and International Education representatives, whilst Kshiltij, candidate for International Rep (welfare), spoke about organising festivals to commemorate different talents and cultures.

Candidates for LGBT+ and BME reps came next, with questions posed on intersectionality, LGBT+ inclusion in sport and the BME attainment gap.

Bethany: Way to improve intersectionality is to allow for those affected to take the lead #qmelections

With no candidates present for the Postgraduate Taught or Research rep roles, Lucy Madeley, President of QM Young Greens, made her case to be elected as RAG Officer.

Science and Engineering Faculty rep candidates Umair, Suyash, Tawab and Samruddhi came up next. This proved to be slightly controversial after a question was asked on boosting women’s representation in STEM (Science, Technology, Engineering and Maths) careers and the only candidate who answered the question suggested fashion technology as an option.

WAIT NO I’m a woman. I need to go into fashion. No more physics for me. #QMelections

The night moved forward as Societies, Sports, Volunteering, Women and Welfare officer candidates made speeches and took questions from the crowd, followed by cross-campus positions which include Student Council Chair, Commercial Services Officer and the newly created Sustainability officer position. No candidate showed up for Student Media officer.

As with the Whitechapel hustings, the executive officer positions proved to be eventful. Rakin Choudhury, now running unopposed for Vice President Barts and the London after Josh Wortlehock pulled out, spoke about wanting the best for QM students as he would for BL students. He was asked about an alleged ‘smear campaign’ against him where people are being encouraged to vote to RON, his policies, the challenges of the QMSU/BLSA relationship and whether Mile End Students should be allowed to vote for the BLSA president.

Rakin says we need more students’ union backing for sure, to encourage healthy competition between QM and BL societies #QMelections

Vice President Education candidates Monty, Alhasan, Mary and Jacob were up next. Whilst 3 of the candidates spoke about their policies, it soon emerged that Jacob was a ‘troll’ candidate, telling the audience ‘This is the part where I could persuade you about all the wonderful things I can do for you, but chances are this probably won’t happen. Therefore I won’t make any promises, and that makes me the most honest candidate and that’s why you should vote for me’. This continued as students asked questions on access to QMPlus modules and postgraduate issues.

“Can’t question my policies if I don’t have any” #QMelections pic.twitter.com/VWUnlCHgYW

Jacob: The number 1 policy I have is honesty #qmelections pic.twitter.com/1YWFtfyIHp

OK, we get the picture, you’re clueless. The novelty’s wearing off a little at this point, you’re just embarrassing.#QMelections

The penultimate position to be debated was the Vice President Welfare, and the candidates in the running were Rishab, Ahmed, Iain and Lewis. Various questions arose concerning supporting alumni; how to spark a conversation around substance abuse; and access to sports – but the main issue spoken widely on was the stigma and alarming statistics on student mental health. Ahmed spoke out on “the issue of mental health stigma and lack of representation in the BME community”, and Iain mentioned his past encounters with homelessness. Current VP Welfare, Adam, quizzed the candidates on what they can do to help reduce the stigma surrounding substance abuse, and how to actively reach out to students who may be affected. When it came to the candidate’s questions for each other, Iain asked his fellow candidates how much of their salary they would be willing to donate to local charities; and Ahmed questioned what the others would do to combat Prevent.

Lewis: “Staff and students should be educated on prevent so we can tackle it properly” #QMelections

Iain: “I want us to get out into the East End” #QMelections pic.twitter.com/X20JLwHZKE

The last round of candidates was for President and Ana, Giulia, Adam and Yas took the stage. Ana spoke about her policies including cheaper food in union outlets and setting up a legal advice centre for students, Giulia stressed her experience in societies and promised to make ‘positive and realistic changes’, Adam spoke of making the union more transparent and Yas talked about his time as societies officer where ‘a lot of mistakes were made institutionally’ and how instead of there being room for change it was time to ‘change the room’. Questions were posed on why they were the best candidates for the position and what diversity meant to them. When it came to questioning each other, Adam asked how they would address substance abuse and Giulia asked about the implementation the QMUL Model.

Attempts were made by current BLSA president Will Atkins to ask questions on staff accountability, but due to the Union student-staff protocol, mention of staff was not allowed in either questions or answers. In response to a question on how they would ensure the Union was heading in unified direction,  Yas expressed his frustration at decisions being made without his consultation or communication as a councillor, and stated that he would use office drop-in hours for students to address concerns. Adam stated he wanted to give more power to bodies like the Societies Board and Club Sport committees. Giulia stated that action plans needed constant reviewing to ensure targets were met and Ana believed increased transparency was the key.

Having to mould your words like that to get an important question asked is ridiculous.#QMelections

To clarify my Q, I think staff do great work but think it’s vital Pres holds them to account to ensure Union is student led #qmelections

everybody has amazing policies, but its tiring seeing people not back them up again and again, saying ‘i have it’ isnt enough #QMelections

Voting is open until Thursday 9th March at 4pm, after which the results are expected to be announced in Drapers Bar and Kitchen at 7.30pm.