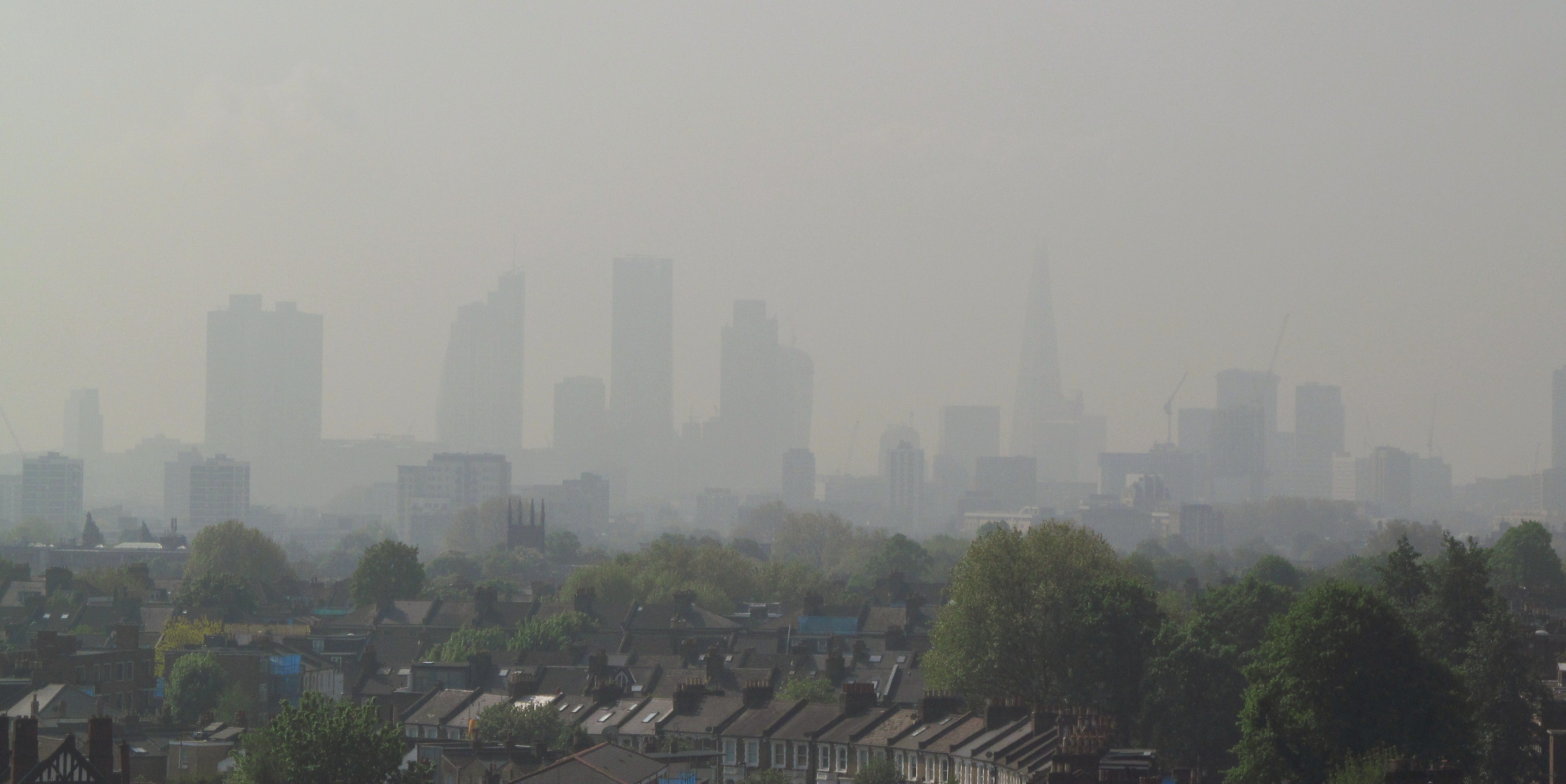 The Big Smoke is getting very dangerous

If you found time between assignments, dissertations, and revision to go outside during January, you will have seen (or coughed at) the smog which has been hanging over London intermittently since New Year. Social media has been full of breath-taking pictures taken from the foot of Canary Wharf showing the higher levels of the building wrapped in clouds in a heavenly manner. Other pictures, taken from viewing platform at the Shard, made skyscraper tips in the City of London look like metal islands in a beautiful sea of fog. Beautiful but deadly. London has a serious air pollution problem.

Air quality in London has been gradually getting worse in recent years; however, due to high levels of smog and air pollution in January, this year we may be forced to do something to reduce this.

In the fourth quarter of 2016, the European Environment Agency revealed Marylebone High Street as the most polluted site in the whole of Europe. Moreover, statistics from the Mayor of London’s office show that London’s air pollution causes 9,416 deaths annually.

So far in 2017, nitrogen dioxide levels broke annual legal limits in both Lambeth and Brixton Road only one week into the start of January. The London Air Quality Network at King’s College London revealed air pollution levels in Poplar, the City of London, and various other areas were as high as their equipment could measure. At 3pm on Monday 23rd, the air quality in London was declared worse than that of Beijing. That week, the Mayor of London, Sadiq Khan, issued a toxic air red alert, saying “it’s crucial that Londoners who are vulnerable, such as asthma sufferers, are able to take appropriate measures to protect themselves”. However, this is not the first time that Londoners have suffered with bad air.

Since the start of the industrial revolution, London has developed a reputation for its poor air quality but the most difficult year that London faced was in December 1952 – a period dubbed ‘the Great Smog of London’. Thick fog reduced visibility to a mere few metres and the whole city was brought to a grinding halt for five days. Coal burning was identified to be the main pollutant and, like the 2017 smog, air became stagnant over London because of a period of cold, windless conditions. It is estimated that anywhere between 4,000 and 12,000 people died as a direct result of the smog, and tens of thousands more became ill.

To make London a safer place to live, the government passed a series of bills – the most significant being the 1956 Clean Air Act. This meant energy now had to be obtained from cleaner sources, there were to be allocated areas where only smokeless fuels could be burned, and power stations were moved away from the city centres. These measures fell short though, as air quality has remained an issue in Britain’s cities.

Air pollution is measured by nitrogen dioxide per cubic metre and hourly levels should not exceed 200 micrograms per cubic metre. By law, it is illegal for levels to exceed that more than 18 times per year. However, by the peak of the 2017 smog (18 – 24 January) many areas of London had already exceeded their annual limit. That same week, levels of carbon monoxide, sulphur dioxide, nitrogen dioxide, and other dangerous particulates were at their highest levels since 2011.

Almost immediately, the smog triggered a string of statements from the Sadiq Khan. Commuters who walk and cycle to work were advised to take public transport instead, to reduce their air exposure. Londoners, especially elderly ones, were told to try and avoid physical exertion – a statement that aggravated people training for the London marathon in April. Motorists were also urged to turn their engines off when waiting in traffic.

Almost a quarter of London schools are in areas that breach the legal limit for air pollution. So, whilst the smog was particularly bad, many infant pupils had their outside playtime reduced and older children were told to cut back on exercise if they began to feel ill. Smog can be especially harmful to children. According to the Director of Policy at the British Lung Foundation, Alison Cook, “for some people, [smog] will cause diseases like lung cancer. For other people, it might just exacerbate something that they already have, like asthma.”

Meanwhile, newspapers have been issuing advice for staying safe, such as avoiding the dirty streets by making more use of public transport and investing in a Respro City Mask; a mask composed of fabrics that filter out dangerous particulates in the air. Scientists have speculated on what the culprit for the smog might be. Experts at King’s College London told the Evening Standard, “air mass back trajectories indicate[d] that air arriving in Greater London… passed over industrialised and urban areas of Germany and the near continent”. However, continental Europe is not entirely to blame. London has its own problems with emissions, a large amount of which is from old diesel cars and buses. It is estimated that old diesel vehicles could be responsible for 50% of all harmful contaminants in London’s air.

Some scientists are blaming wood burning stoves. Over 1.2 million British households now own a wood burning stove and that number is increasing by 175,000 per year. Professor Grigg of the London School of Medicine told The Telegraph: “It is true to say that if you burn anything, it will produce little particles of soot. It doesn’t matter if that soot comes from fossil fuel or wood-burning, those particles are going to get deep down into your lungs. And this has a potential to cause a harmful effect”.

If you are worried about London’s air pollution, as you should be, you are not alone. A removals company recently polled 1000 customers on their reasoning for moving out of the capital and discovered ever-increasing air pollution was the biggest worry. London’s smog is not only a public health risk, but it is a financial burden too. It costs London’s economy up to £3.7 billion. So, what can be done?

Around the world, cities have come up with interesting and creative solutions to make their air safer. Paris experienced their worst air pollution for a decade in December, so responded by making their public transport free. Also, they only permitted cars with even-numbered registration plates to be driven on December 6th and odd-numbered registration plates the following day. Drivers who violated this rule were fined €35. Barcelona created ‘superblocks’ in 2016, which reduce air pollution from cars by minimising their presence in city centres. As much of Barcelona’s urban landscape is designed like the American style grid system, the government created a perimeter around every three-square block area and limited the speed inside to 6mph. This means that cars and buses travelling across the city use the roads outside the superblock and the roads inside can be used by pedestrians.

In the UK, the solution may be a little more difficult than simply waiting for the weather to improve and then pass some laws like what was done after “The Great Smog”. Bills have been proposed to parliament, which would create a national network of clean air zones. However, these plans were shelved by the treasury. Last summer, Sadiq Khan announced plans to charge drivers of the most harmful cars an extra £10 (on top of the congestion charge) and introduce emission-less buses. Unfortunately, it is unlikely that these measures will be able to reduce air pollution by a sufficient amount. We asked Queen Mary’s Young Greens what they would like to see done about the air pollution. They said, “We would love for there to be a greater push for a more pedestrian and cycle friendly city, reducing the amount of traffic, and therefore pollution in the city. Also, expansion of the Low Emissions Zone to ensure less people are using vehicles that cause detrimental health effects to Londoners. Using a smart congestion charge, as well as moving towards banning diesel cars, are all possible options that could also help ease the amount of air pollution in London, thereby ensuring a safer city for its residents and visitors”.

It is obvious that a modern version of the Clean Air Act of 1956 is urgently needed. Unfortunately, air quality standards and aims to cut fine particulate matter by 20% by 2020 are initiatives from the European Commission. And, with Britain leaving the European Union, this means it is now wholly down to the British Parliament and London Assembly to clean up London’s air. They have done it once, but can they do it again? Let’s hope so.