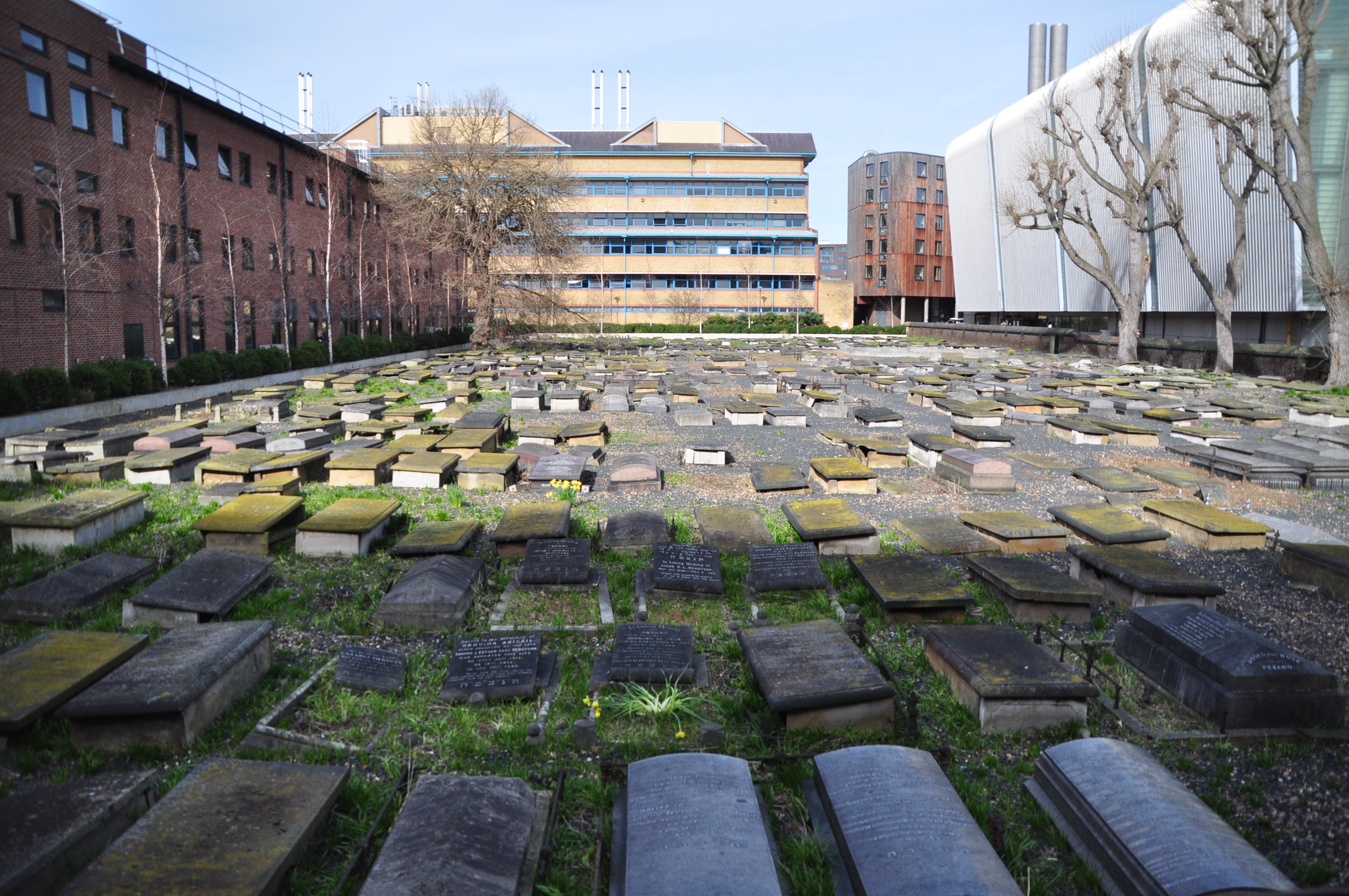 Ever wondered how a 18th century cemetery for Spanish and Portuguese Jews ended up in the middle of Queen Mary’s Mile End campus?

There is something fascinating about old weather-beaten cemeteries. During a trip to Scotland in the summer of 2015 I came across quite a few of them. They would pop up in the most isolated patches of land, the slanted Celtic crosses were surrounded by crumbling walls and the overgrown gravestones told the stories of the deceased; a picture that fitted so perfectly in the Scottish Highlands.

It is all the more astonishing that one can have a similar experience when walking across the Mile End campus. To be fair, the dreadfulness of the Bancroft building must be ignored and there are also no crosses on the cemetery and no dead Scotsmen. Instead one finds Hebrew letters and Spanish and Portuguese names such Rapheal Nunes Carvalho or Henriques de Souza engraved on the tombs. It is the site of the Novo Cemetery, burial ground for the Sephardic Jews which once had their home in the East End of London.

The East End has always been a melting pot of people from all parts of the world. It was here that in the 14th century immigrants from Flanders, which is in present-day Belgium, brought malt to England, thus introducing the main ingredient for beer. It was a Dutchman who drained the marshes along the Thames so that houses could be built far into the East End and it was the persecuted French Huguenots who brought with them new methods of silk weaving which improved the English silk industry.

Just as the Huguenots, Jewish communities also came to London to escape persecution, mostly from Spain and Portugal. The main reason for Jews having to leave their homes on the Iberian Peninsula was the Inquisition in the late 15th century, which forced them to either convert to Christianity or leave the country. Many fled to Portugal, whence they would later be forced to leave again. Others moved to North Africa and some made it all the way to England. Once they arrived in England they lived quiet lives, not openly declaring themselves as Jews, for the Jews had been expelled from England by Edward I in 1290. The community had to practice its religion in secret. It wasn’t until 1656 that the Jewish community asked and was granted permission to build a synagogue within the City of London. One year later some land was leased for a Jewish cemetery along Mile End road. Today this cemetery is called the Velho or old cemetery, which still exists tucked away behind Albert Stern house. The house, now QMUL student accommodation, has plaques inscribed with Hebrew, which remind us of its former function as a hospital and then as an old age home for the community.

After 50 years, the cemetery was starting to fill up and in 1724 new land was bough to establish the Novo cemetery or new cemetery. This is the cemetery which today is at the heart of QM’s Mile End campus. But the cemetery used to be much bigger than what can be seen nowadays; in fact, in 1853 it was extended. The Novo cemetery would became the final resting place for not just East End notables, but also for figures respected well beyond the capital’s borders. Take for instance the peculiar story of Daniel Mendoza, a man you have most certainly come across once when walking about campus. Mendoza was a boxer who is portrayed in action on the bronze plaque attached to the wall of the library, across from Ground Café. He lived from 1764 to 1836 and became boxing champion of England in 1795. He significantly altered the techniques of the sport and wrote what is considered to be the first boxing text book “The Art of Boxing.” Not far from him laid the remains of Benjamin d’Israeli, the grandfather of the 19th Century Prime Minister of the same name. For many other prominent East Londoners, the Novo cemetery would become their final place of resting.

The cemetery remained in use until it formally closed in 1936. It did, however, reopen one last time in 1974 when a 93-year-old man was buried there for whom a grave had been reserved long time ago. Nevertheless, by the early 20th century the grave yard was full and many Jews had left the East End as they became more wealthy and felt more and more accepted in British society. But what then happened to the remaining parts of the Novo cemetery?

Queen Mary College (that was our old name) was looking to expand its campus to the east of G.O. Jones. In 1974 the college bought the cemetery with the exception of the little patch which still remains today. This part contains the most recently added graves and is held on a 999 year lease. In order to do this Queen Mary College required a private bill of parliament (a change of law for specific individuals under particular circumstances) to authorize the acquisition. If any fresher were to witness a shady ghost wandering across campus while on his way home from Drapers, he may have had a pint too many- the graves and their human remains were relocated to Brentwood in Essex where the college had owned some land, before student accommodation and the library were built.

The Novo cemetery is a testimony to the East End’s diverse history and present. It tells the story of religious persecution, migration, of the individuals that are buried there and of our own university. The cemetery can be visited throughout the year and is accessible through stairs across from Arts Two.

For more information on this topic, I recommend Dr Caron Lipman’s book The Sephardic Jewish Cemeteries at Queen Mary, University of London. Equally interesting is Colin Kerrigan’s A History of Tower Hamlets which provides information on “our” borough. Both books are available for loan at the library.