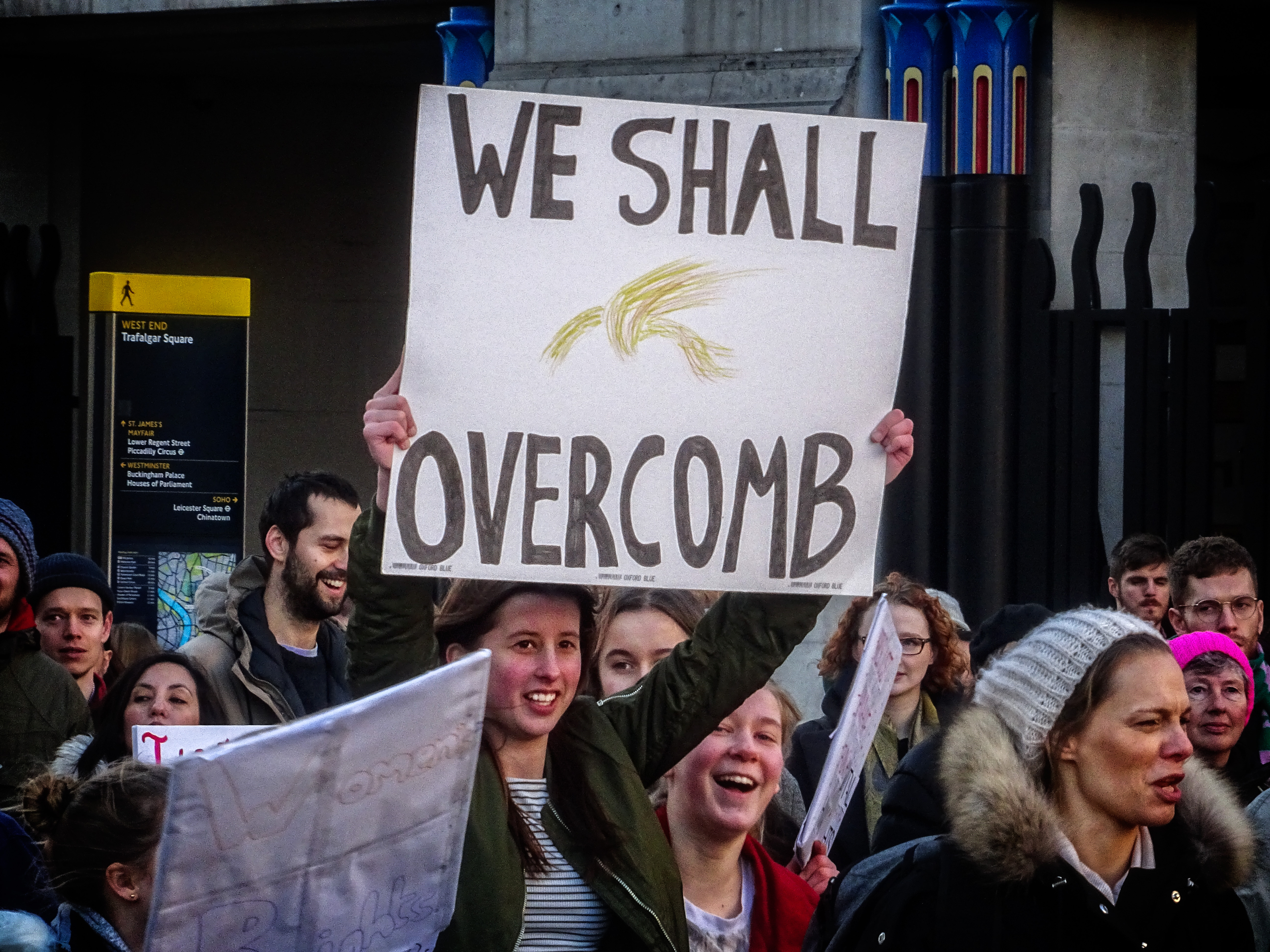 By Sophie Mitchell on 28th February 2017

The Print follows a member of the London Women’s March, examining the motives and outcomes of the demonstration.

‘I am just a woman, marching in front of the world, asking it to respect her’.

Never did I think that 21st January 2017 would be so globally influential.

Emerging from Bond Street station, which had just reopened after issues of overcrowding, I was immediately overwhelmed by the sheer amount of activity, colours and sounds. The sky was cloudless and blue, with the sun’s vivid glare dancing off people, banners and buildings. To say pathetic fallacy was at play would be an understatement, as the atmosphere of the bright day propelled the enthusiasm and optimism of the estimated 100,000 people. The event advertised on Facebook had led me to believe 36,000 people were marching. The sheer scale of the event that unfolded was unexpected, but welcomed with open arms, quite literally. Although branded ‘Women’s March’, the event encompassed so much more than a purely feminist agenda. The masses marched to support socialism, spark anarchism, promote environmentalism, condemn racism, reject political elitism, enhance LGBTQ awareness, and to convey despair against the inauguration of Donald Trump.

All of these causes, relevant, potent and urgent, were promoted with an infectious optimism that was evident in the faces of the marchers. The multitude of faces I saw were all different in age, race, gender, orientation and ability, yet united in their hope for an active present and an affected future. Walking alongside me, two women dressed as Victorian Suffragettes held hands with a young boy, dressed in a Victorian tweed suit. Elderly men and women marched for the inequality of times past, alongside young boys and girls marching with their parents for an equal future. The solidarity, regardless of age or any other divisive factor, was indescribably moving. The march worked to eradicate a history of discrimination, affirming that a woman’s place isn’t ‘in the kitchen’ or ‘making a sandwich’, it is in the move towards eradicating sexism and inequality. The fundamental message of Feminism being equally accessible and relevant to both men and women was definitely visible during the march, as was the advocacy of Feminism encompassing all races, sexual orientations and gender identities. The march was for everyone with a voice needing to be heard, and for those whose voices remain oppressed, overlooked, silenced.

Whilst the kaleidoscope of rainbow-coloured people and signs, marching and dancing to the sound of chants, was mesmerisingly uplifting, there was a profound realisation of how severely we remain divided as the human race. As time has progressed throughout history, the fundamental rights of all human beings have been established, fought for, and upheld in some cases. The abolishment of slavery in 1865 (USA), votes for women secured in 1920, the Civil Rights act of 1964, to name a few. Yet, however fundamental these changes were to society, the current state of inequality and discrimination begs the question – will we, as a race, ever truly reach a state of total equality? Or is our capacity to divide and discriminate an inherent, innate aspect of our nature? Whilst the latter is a sobering thought, the documentable evidence from human history is evident. Even today, our present is shaping itself to become entrenched in history as a time of inequality and discrimination.

Whilst the Women’s March in London, and all other protests across the globe, were a welcome sight for those seeking solidarity against the inauguration of President Trump, his current time in office has produced several alarming messages. In the wake of his recent adoption of Presidential authority, Trump has pushed to appeal Obamacare, arguably the legacy of Obama’s presidency. Alongside this, on January 23rd, Trump alarmingly rejuvenated former President Ronald Reagan’s act to restrict U.S. funding towards abortion charities across the globe. This acted as a direct move against the strive for equality that was so aptly demonstrated through the Women’s March and protests globally. Not only will this restriction of healthcare funding prevent the right of women to receive abortions, it may lead to a concerning rise in the amount of unsafe abortions carried out, by both women themselves and unauthorised doctors.

To exacerbate this, the following day on the 24th January, Trump distressingly signed an executive order allowing the completion of the Dakota Access oil pipeline, which will run from North Dakota to Illinois. The pipeline proposal has received intense backlash from activists, who have worked endlessly to conserve both the natural environment and the rightful home of the indigenous Standing Rock Sioux tribe. This move from the new American President shows a bleak future for environmental issues and climate change, with Trump showing little care for pursuing renewable energy sources and preserving locations of natural and cultural value.

More recently, the value of cultural and religious identity was further threatened by Trump through his ‘immigration ban’, a 90-day suspension on immigrants and visa holders attempting to enter the U.S. from seven countries of mainly Muslim religion (Iran, Iraq, Syria, Libya, Yemen, Somalia and Sudan). As a direct result of this, hundreds of people found themselves stranded at airports and denied admission into the country that they call their home, the supposed ‘land of the free’, America. Although the public responded with vigour and potency, displaying their outrage against this blatant discrimination, Trump further acted to suspend the US refugee admissions programme for 120 days. In conjunction with this, the Syrian refugee admissions program was suspended indefinitely.

The dire consequences of these actions from Trump’s presidency are prominent and developing, and will continue to divide the nation into the foreseeable future. These acts from Trump seek to threaten not only the very social fabric of a country, but the environmental and political security of the world. The implications of Trump’s actions will not remain contained within the (hopefully never literal) walls of the U.S.A., they will seep across the globe through channels of media and news, spreading this regime of discrimination and hatred. This is why the Women’s March in London happened. This is why countless marches happened. And these protests need to happen, as they protect the fundamental human right to express and uphold our intrinsic values and beliefs, for the benefit of our cohesion as a global population. If the world remains passive and quiet, the louder, richer, more influential voices will drown out the masses. But if the many unite in their shared belief of equality, peace and global preservation, those voices will not be drowned out.