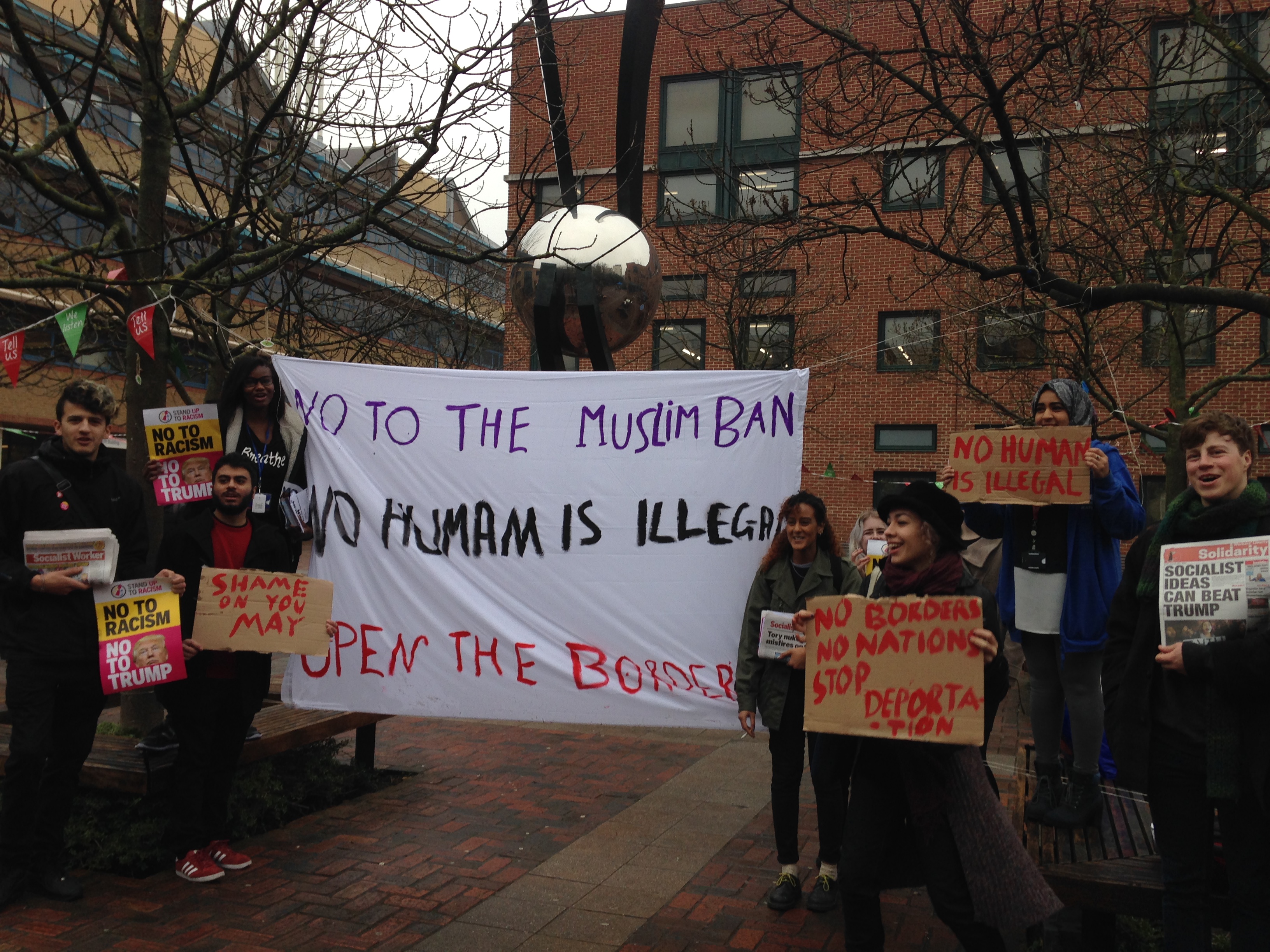 On 31st January, a protest against Donald Trump’s controversial Muslim Ban was held in Library Square. President Trump signed an executive order on 28th January which has stopped all refugees from entering the US and temporarily barred people who come from seven Muslim-majority countries.

Organiser of the protest, Monty Shield, had this to say on why he decided to hold the demonstration:

“We were protesting against Trump’s Muslim Ban policy and also against the UK Government’s complicity in it. We were calling for the UK Government to oppose the ban and offer assistance to the refugees affected by it”.

Although pessimistic about the impact of this single protest, Monty believes that the anti-Trump movement will encourage change.

“This week in London we were joined by UCL, KCL and UAL, and several other campuses, such as Warwick, Oxford, Aberdeen and others, also held similar protests.

“While we don’t expect the Government to change its approach to this policy just because of our protests, it is the case that mass movements and mobilisation around specific issues can force the Government to change what they are doing, and we saw our protest as part of the major mobilisation that has happened so far in response to this policy, which also saw thousands of people protest outside Downing Street”.

Concern over the rise of the Far Right and racist attacks also motivated this protest.

“The best way to change this is to challenge racist ideas openly and directly and to try to build a culture in which those ideas are not seen as acceptable and in which people are being convinced away from those ideas. So, in this respect, our protest was an act of solidarity towards those who suffer racism and was an attempt to challenge the racism, specifically in this case Islamophobic racism, that has been a major part of the policies of the US and UK Governments…”

Adam Ansari, who helped with the co-ordination of the demo, does not think much of Theresa May’s response to the executive order.

“….I am extremely disappointed that Theresa May is meeting Trump despite his divisive policies and comments. Her duty as Prime Minister is to represent the British people and society, which is multicultural. The fact that she has met Trump contradicts the harmony between people of different races and faiths in Britain”.

Another student who attended the protest, Hannah Santos, hoped it would educate students about the Trump policy.

“[I am here] just generally to create awareness, because I think most of us don’t read newspapers or actively try and, like, look for information… It’s an easy way to let people know what’s happening”.

Since the executive order was implemented, protests have been held across various countries.

The ban has now been temporarily halted by federal Judge Robart and Mr Trump’s appeal against the decision has been denied.