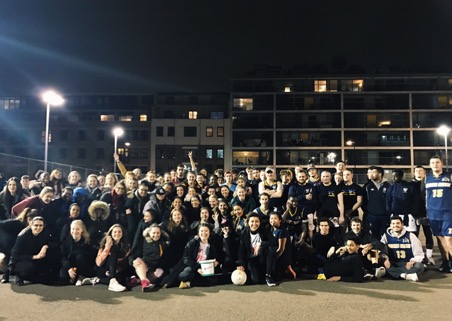 B-all in the Name of Charity

By Sophie Ogbonda-Jardine on 18th February 2017

Queen Mary Netball Club have collaborated again with the Uni Boob Team (UBT) for the annual netball tournament in aid of CoppaFeel! and Sophie Ogbonda-Jardine is here to tell you all about it

QM Netball Club are raising money for CoppaFeel! through the university’s Raise and Give ‘Adopt a Charity’ scheme.

Last year, we organised a charity netball tournament for teams across Club Sport to make a ‘tit’ of themselves on court. The matches were very close, with QMRFC making it to the final against our netball girls, though missed out on claiming the title of ‘Best Boob Ballers’.

This year we invited a host of clubs and saw the return of some friendly faces from QM Women’s Football, Hockey and Men’s Rugby – and welcomed Basketball into the mix for our 2017 event! The games were well fought, featuring some sketchy footwork and several good shots. The quarter-finals saw Rugby and Basketball win confidently, leading to the final game to be played.

A massive congratulations to Basketball, crowned boob champions, beating Rugby by 6 goals to 3.

A huge thank you to all those who donated and supported from the side lines. We managed to raise £215! See you on court in 2018!

For more information on all the good work CoppaFeel! do check out: www.coppafeel.org

Published in Curated and Sport