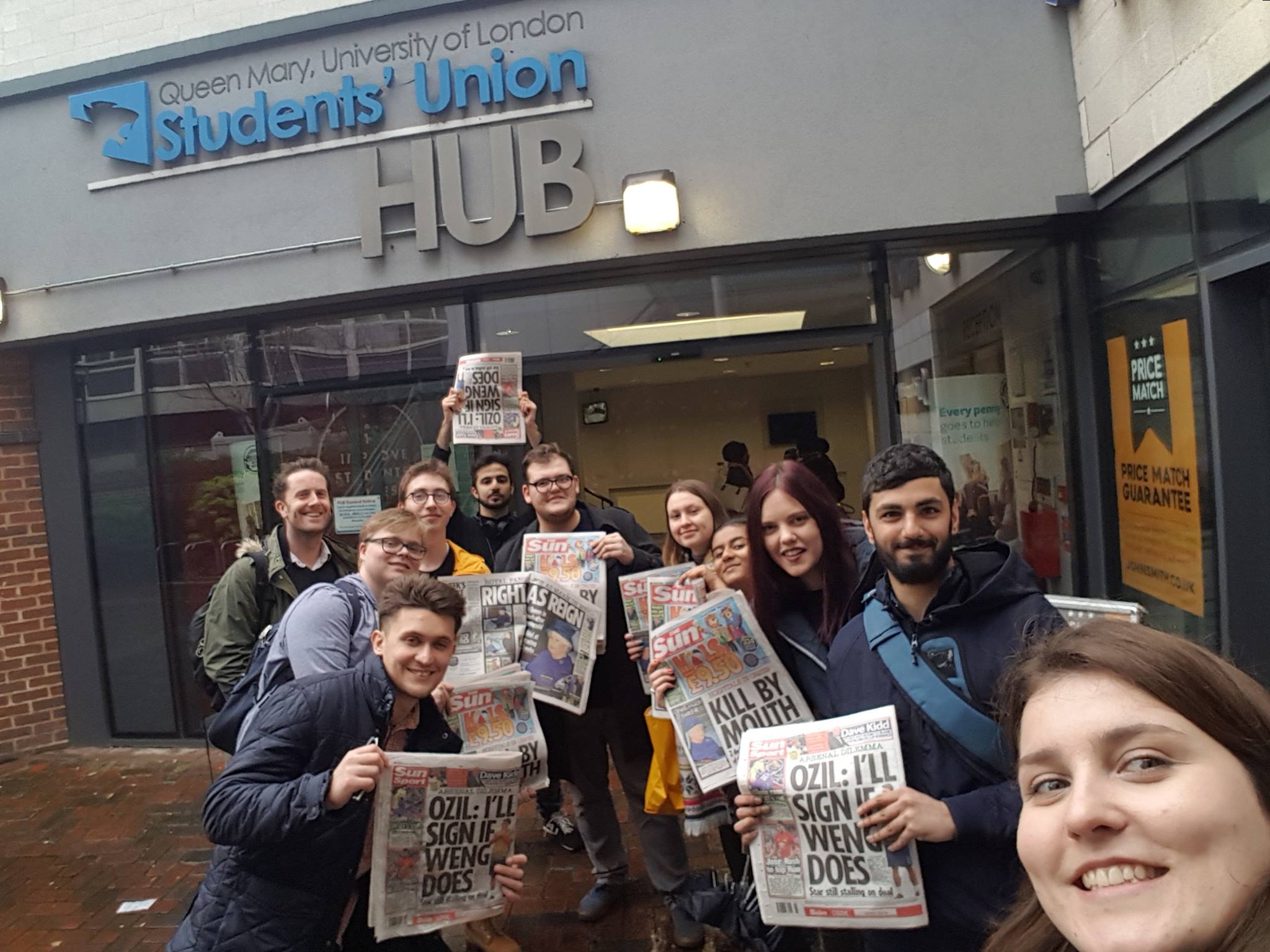 On Tuesday 10th January, members of Queen Mary’s Free Speech Society handed out 250 copies of The Sun as part of a #FreeThePress campaign.

This was a response to QM Student Council’s decision to ban the sale of The Sun, The Daily Mail and The Daily Express on campus, stating that they “[advocate] hate speech”. The motion was passed by 14 students.

The distribution of The Sun around QM has attracted national media coverage with The Telegraph, The Independent and The Huffington Post all reporting the story.

The handout took place in various locations around QM but mainly at the QMSU Building and the Library where, one student reported to The Print, tensions were particularly high.

“We did the protest for two reasons. Firstly to contest the ban of the sale of the Sun, the Mail and Express, as we had received a lot of messages from students [who are] shocked/disappointed by the decision and we wanted to show that we were making a stand against it. Secondly this was about supporting the #FreeThePress campaign and defending press freedom, which is under threat with proposed new press regulations – Leveson Part 2 and section 40.”

When asked what the society hope comes from the protest, she said,

“The result we want is just to continue to defend free speech and a free press on campus and to get other students involved, too, in understanding the importance of these basic, fundamental freedoms. If we can gather enough support to overturn the ban, that would be ideal.”

Laura Potter, Student Council Welfare Representative and the proposer of the paper ban motion, had this to say on the demonstration,

“First of all, it’s really good to see students getting involved with SU politics, making their voice heard and engaging with campaigns. However, I’d be concerned about the extent some of the protesters care about free speech rather than winding people up. You could even ask why aren’t they also campaigning on the government’s Prevent strategy which directly targets free speech and threatens Islamic students? They can campaign all they want, but they’ve deliberately conducted themselves both online and offline in an incredibly inflammatory way. Slamming papers down on tables is hardly an indication of a student demand for The Sun. Most of the papers ended up in bins.”

Queen Mary Students’ Union President, Miranda Black, responded to the protest, emphasising that the ban could be repealed,

“I think it’s good that we have active students who protest for what they think is right, but students were misinformed that they’d been completely banned from campus. If students want the Union to start selling the papers in our outlets again, a motion will have to be written for Student Council or the All Student Meeting in March where all students can vote.”

Queen Mary is not the only university to ban the sale of these newspapers. City, University of London and Plymouth University have also prohibited The Sun, The Daily Mail and The Daily Express from being bought at any of their student union venues. City have gone further with their ban than QM by forbidding the papers to be on campus at all stating,

“…there is no place for the Sun, Daily Mail or Express (In their current form) on City, University of London campuses or properties.”

At Queen Mary, you are still able to have and read any one of these papers on campus.
The Print also contacted The Sun for comment and a spokesman from the newspaper said,

“These young students deserve enormous credit for defying their peers and standing up for free speech and the ability to take an informed decision about what one reads, rather than have it dictated from above. This stand is even more impressive when you see the disgusting hate and abuse they’ve suffered on social media as a result.”