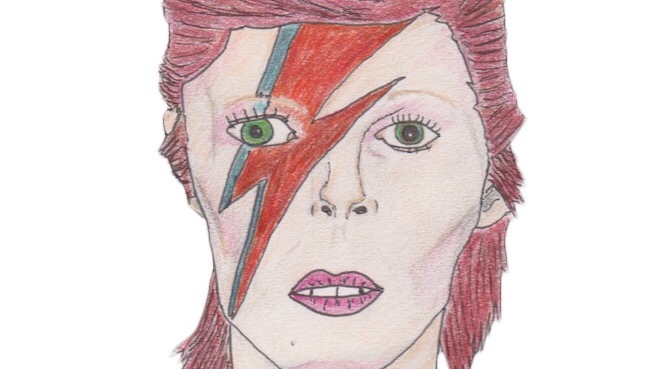 The Print takes a stroll through the Starman’s city

January 10th 2016, the day Ziggy went back to the stars. When the Thin White Duke put out his last cigarette and Major Tom floated round his tin can no more. The loss of David Bowie is still difficult to comprehend. His many alter egos made the singer into an almost mythical creature, a man with a never-ending array of characters he could use to tantalize the world with music.

It’s quite a strange feeling losing an idol. I spent my teenage years screaming Suffragette City at the top of my lungs and referring to my Dad as Ziggy whenever he picked up his guitar because he played it left hand. I adored Bowie and, as corny as it may sound, he really was a hero of mine. His poetic lyrics and extravagant dress filled me with a sense of wonder but more than anything, his courage to defy convention inspired me to, at least try, not care so much about what people think.

QMTV have commemorated the first anniversary of Bowie’s death by taking a tour of the various London spots which helped the man shape his unique sound and most iconic looks. This journalist was lucky enough to tag along and wonder through the city that the late great Bowie once called home…

We began our journey at 40 Stansfield Road, Brixton. It was here, on 8th January 1947, that David Robert Jones was born. Long before he become the enormous star we all know of today, he lived here with his father and mother, John and Peggy. They moved to Bromley in South London when David was six.

It was so touching to see the multitude of tributes left by the property. So many thanking Bowie for inspiring them, showing them a young boy from Brixton could go on to be a global phenomenon.

Our next stop was No. 7 Denmark Street in London’s West End. Now a Flat Iron restaurant, this used to be the address of the La Gioconda Café. David Bowie would often visit the venue with his friend Mark Feld, future glam rock star Mark Bolan, where they would listen to records and dream of their future careers in music.

Stroll a little further down the street and you’ll find the spot where Ralph Horton, Bowie’s first agent, gave the singer his big break. He urged the singer to adopt a more mod image and got his single “Can’t Help Thinking About Me” into the charts at #34.

It was strange wondering down this street, thinking how different it must have been when the young David Jones hanged out there. It’s sad that this café, which had played host to some of the UK’s most creative artists, is now just a memory. Just a blue plaque to mark what once was.

Just a stone’s throw away from the site where Bowie was discovered is Pollock’s Toy Museum. It is an independent, family run museum which houses various Victorian toys, puppets and optical illusions, all of which inspired the artist’s image. Specifically, his look the Blue Clown from the amazing music video for “Ashes to Ashes”.

It was incredible to actually visit the spot which influenced one of Bowie’s characters, trying to understand the creative process of such a unique performer.

After seeing the museum, we ventured off to Trident Studios. This is where Bowie recorded some of his most iconic records including “Space Oddity”, “Hunky Dory” and the “Rise and Fall of Ziggy Startdust”.

I was positively giddy peeking through the window of the studio and seeing the late singer’s albums lining the walls. I stepped back, almost in awe, able to visit the place where some of my favourite songs were created.

Arguably, no alter ego of Bowie’s is more famous than Ziggy Stardust. We went to Heddon Street to see the location where the Starman landed. The street where Bowie posed for the album cover of the infamous “The Rise and Fall of Ziggy Stardust and the Spiders from Mars”.

For my 18th birthday, my parents bought me my first record player along with that album. The story of a bisexual alien superstar was like nothing I’d ever heard before. It’s regarded as one of the greatest records ever made and we were able to see the exact spot where this most infamous figure was born.

We had visited the site of Ziggy’s birth so we hopped onto the tube, journeying to the place of his death. On 3rd July 1973 at the Hammersmith Odeon, now the Hammersmith Apollo, Bowie announced that Ziggy was gone. The news shocked his fans all over the world.

Little did they know their beloved icon would use the death of Ziggy to create even more characters which would live in musical infamy.

The final stop on our tour took us back to Brixton. Opposite the tube station you’ll find a beautiful mural commemorating the famous singer. Painted by James Cochran in 2013, it’s become a sort of shrine, a place for fans to gather and remember their hero.

Many had congregated to pay their respects to the musical legend on what would have been his 70th birthday. We were all united in grief, sharing stories of what David Bowie had meant to us. The influence he had on our lives and the pain we all felt that he was no longer here.

The Starman may have returned to the sky, but the mark he left on the world, and London in particular, will forever live on.

Don’t forget to check out QMTV’s video “Ziggy’s Guide to London” by clicking the link below.

Special thanks to Paige Chaplin, Emma McMullen, Priya Nirmal and Linnéa Borg for helping to put this article together.